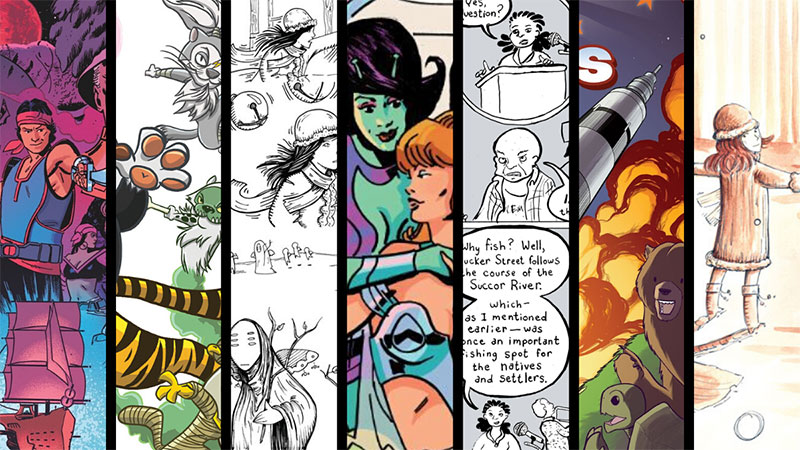 Washtenaw County is full of amazing talent that is just begging to be explored. The art community has been working diligently to demonstrate the importance of art and none have been working harder than comic book artists.

With comic book printing on hold, the medium has moved towards a digital base. This shift has allowed readers to access comics but the current governmental orders closing stores has made distribution of a creator’s work somewhat tricky. But that hasn’t stopped everyone. Plenty of local talent will entice comic book enthusiasts to freely explore even while big publishers hold off on printing.

Jerzy Drozd is a staple in the Washtenaw County comic book scene. Drozd works closely with the education community, providing workshops teachers and students alike at schools and libraries. Additionally, Drozd hosts a comic-centric podcast, Comics are Great, giving listeners a sneak peek into the world of creating comics. Drozd does his best to share his knowledge and experience with budding comic creators of all sorts.

Drozd has plenty of background in comics to help aspiring creators. Science Comics: Rockets, co-created with his wife Ann Drozd, was published by First Second books and explores Newton’s Laws of motion, the history of rockets, and what the future holds for space aviation. Although Drozd does do a lot of work in youth and teen fiction, he does explore the space in comics for adults. His work, The Warren Commission Report, published by Abrams ComicArts, is a graphic exploration into the Kennedy assassination. Drozd does a fantastic job matching art with story pacing, giving readers an informative and fresh look at the Kennedy assassinations.

He also has works with Marvel Comics, VIZ Media, and McGraw-Hill, showcasing his work with youth, teen, and adult fiction. For a taste of his work, explore his current webcomics, Amazon Academy. Although Amazon Academy is currently on hiatus, this will give readers a chance to see why Drozd is a fantastic local artist. For more of his work, visit his website.

A graphic designer by day and comic book artist by night, Joshua Buchanan gives the art community a most adorable art style. A welcomed staple of the Ann Arbor Comics Arts Festival (or A2CAF) held yearly, Buchanan’s works include Scratch9, an all-ages comic about a mad scientist’s experiment gone wrong. As a result of the poorly conceived experiment, an ordinary house cat named Scratch inherits the ability to summon his nine lives to escape any situation.

During A2CAF, Buchanan can often be found participating in Quick Draw events where improvisational cartooning with the audience’s participation brings humor and fun all in the same place. Buchanan’s art style reminds readers to keep having fun with their work. His style is adorable and cartoonish yet still keeps pace with the stories within his work. It’s the perfect style for enticing reluctant young readers into reading, even just a little bit more.

Buchanan’s most popular work, The Rocket, is currently a little tricky to find. Because it is a self-published work, there is a chance that the current situation is the reason for this comics’ absence. However, readers can keep up to date with what Joshua Buchanan is up to through his twitter feed. Although A2CAF is suspended this year, that won’t stop Buchanan, and the creative community, from continuously pushing forward!

Zelasko’s art is a little different from the artists mentioned above. The detail work that Zelasko puts into her work creates imagery that can be borderline eerie, but that’s what makes her work stand out. Zelasko pulls inspiration from myth and folktales, and it shows. Her perspective on the world is fascinating, and her detailed art reflects how detailed and in-depth the world around us truly is.

Zelasko’s first completed comic, Snow, features a young girl walking through the woods during the snow. The protagonist finds herself watching an unexpected and otherworldly event, which leaves her dumbfounded as to what to do next. Zelasko does a fantastic job blurring the line between reality and fantasy by removing all borders from the comic. The snow is what divides each panel, adding to the work by making it visually intriguing.

Zelasko’s eerie style really shines through in Something Something Aaron, the story of a boy whose dog’s head explodes into a galaxy. Adam sets himself on the quest of fixing his dog and so that they can reunite. The details of the images in Something Something Adam is beautiful. In a scene where Adam is walking through the forest in search of his dog, the details on the trees and along the path remind readers of how cramped and tight these spaces can be.

Suzanne Baumann currently publishes her works under the name Fridge Magnet Concoctions. Baumann’s art style is offbeat, combining fine lines and very strong black tones to create panels that stand out and distinguish themselves from other comics.

Baumann’s work on Sucker Street gives perspective on the way she sees the world. Her imagery plays with the audience, giving images that are both reminiscent of things Michiganders have seen while giving readers perceptions a dash of her own observations of everyday life. Sucker Street is Baumann’s first long-form serial story and stands out as relatable to anyone from Michigan. Although Baumann does offer a print version of Sucker Street, readers are invited to check her work out digitally on her website. Suzanne Bauman also works as a freelance graphic designer, which allows her art talent to enhance her webpage and graphic design.

Baumann has a handful of mini-comics on her website for readers to explore. Any reader who wants to check out her art style is welcome to explore her work here.

Currently residing in Ypsilanti, MI, Tom Reilly has illustration experience with some of the biggest names in comics, including Marvel and Dark Horse. Reilly is currently represented by Modern Mythology Comic Art, a collective that wants to bridge the gap between collectors and artists.

Reilly’s portfolio consists of works from Immortal Hulk (2018) #28 to Astro Hustle, showing the variety Reilly can bring to comics. Astro Hustle is one of Reilly’s most intriguing works of art. The black sheep of a prominent activist family, cosmic criminal Chen Andalou comes back to life after accidentally being put into cryo-stasis for sixty years. Although his younger brother is now President of the Galaxy, this does not stop Chen from doing what he does best: stealing stuff and causing trouble. Although the miniseries was short lived due to allegations against writer Jai Nitz, this does not take away the fact that Reilly’s art is fantastic throughout the issues that were published.

Reilly’s art throughout Astro Hustle is reminiscent of the 70’s, maintaining a disco/sci-fi feel throughout every issue. The character’s styles and illustrations of the future are reminiscent of what the future looked like in the 70’s. However, unlike most of the previous books mentioned on this list, this book is not meant for children.

To keep up with what Tom Reilly is up to, be sure to follow his Twitter page and find more of his works digitally on Comixology.