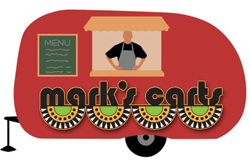 In what’s become an annual rite of spring, Mark’s Carts courtyard is unlocking its gates to summon Ann Arbor foodies to its outdoor dining patio, featuring a reshuffled lineup of local vendors.

Two new carts, El Manantial Mexican food and Satchel’s BBQ–expanding its operations from Washtenaw Avenue–are taking over slots of Eat and the Lunch Room, which have opened and announced openings of brick and mortar restaurants.

Opening for his third season at First and Ashley streets around the corner from Downtown Home and Garden, owner Mark Hodesh has found a culinary hit in Ann Arbor providing a wide palette of tastes with upscale, locally sourced food for $5-$10 a plate.
“It’s become a community hub and we’re excited that folks come here not just to eat, but to hang out, meet old friends and make new ones,” Hodesh said.

The courtyard opens from April 1 – Oct. 31 every day of the week. Live music often fills the evenings and some vendors open for a 9 a.m. breakfast Wednesday through Sunday.

Building on his success, Hodesh last year partnered with Bill Zolkowski to open Bill’s Beer Garden on the south parking lot of the garden store. Bill’s serves a variety of Michigan beers from a small enclosed bar to customers at benches set up on the pavement. Bill’s enjoyed a short opening during St. Patrick’s Day weekend March 15-17 and will briefly open for FestiFools weekend the first week of April.
The official opening of the beer garden is May 1. Hours are Thursday through Sunday 7-11 p.m. and six days a week in July, eventually closing down operations again in December.

Bill’s schedule allows for the garden store to use the parking lot, but will also make allowances for warm weather and other special events to be announced through Facebook and other social media.

its own right. But one striking feature among the newcomers is that almost all of them are run by families or ventures with stakes in multiple restaurants in Ann Arbor, sometimes in the same block.

Instead of competing, they offer different menus and dining experiences to take advantage of the economies of scale that range from sharing bookkeepers to bathrooms.

For instance, the new upscale Mexican eatery on Liberty Street, Isalita, which  specializes in small plates, is owned by Adam Burus and shares a next door kitchen with Barus’s popular Italian eatery, Mani’s Osteria, The firm 2Mission Design and Development LLC run by real estate developers Jon Carlson and Greg Lobdell implemented a model of shared facilities when they opened the sleek Latina American restaurant, Lena Cafe, in the old Parthenon Restaurant on Main Street. Lena shares a kitchen and restrooms with Habana, a lounge and eatery that moved into the basement from its original location next door to the now-expanded Blue Tractor.

“What they will tell you is, economy of scale,” says Susan Pollay, executive director of the Downtown Development Association. “You still need a bookkeeper whether you have three restaurants or one. It makes sense at some point to grow your business to pay for basic things you need. “

Another newcomer, Vellum serves upscale American Nuevo cuisine, and is owned by Peter Roumanis. His father, John, owns Mediterrano and Carlyle Grill. And What Crêpe, a Chic French bistro, is the third location, opened by entrepreneur Paul Jenkins Jr., in the former Squares restaurant on Liberty Street.

Mainstreet Ventures set the trend in such economies of scale, owning five downtown locations all in the same block. The Chop House and Gratzi share La Dolce Vita, a desert room and cigar bar between them, while Palio and Real Seafood Co. sit on the other side of the street.

The Mainstreet model is one of healthy internal competition, which the ownership believes insures the best product. “Each restaurant has to compete for every guest by providing great food and service in a nice feeling environment,” said president Mike Gibbons. “Where we benefit is from synergy. People often park and go to the restaurant with the shortest wait. It is not uncommon to see guests stop in one of our places for drinks and appetizers then walk across the street for dinner.”

Having several restaurants does offer more buying power for ingredients, which enables the venture to get high quality products at discounts, he said.

“I think we’ve had remarkable entrepreneurs who have pursued the best restaurants. We are fortunate these are outstanding people who have made a commitment to Ann Arbor,” said Pollay. “I don’t know that it’s always easy to start, but once you have sense of palette and price point, and the seasonality of a college town, it makes sense.”