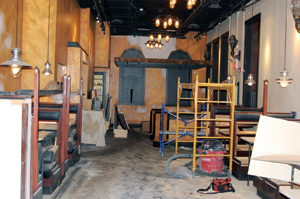 The Parthenon Restaurant has been sold after nearly 40 years on Main Street. The owners of Cafe Habana recently purchased the long-time Ann Arbor restaurant with plans to move Cafe Habana into the Parthenon space this summer. Cafe Habana’s former location on East Washington Street has been closed since Jan. 8 which allowed the Blue Tractor, next door, to expand.

The 4,000-square-foot Parthenon Restaurant, which is owned by John and Steve Gavas, was listed for sale for $650,000.

In early January, business partners Greg Lobdell and Jon Carlson announced they would expand Blue Tractor into the Cafe Habana space. Since, they have added a new side room that recently opened and reconstructed the menu to include some unique tastes, from chile ginger spare ribs to a smoked tofu hoagie. Cafe Habana will move and reopen in summer 2012.
Things have been good for the business partners, who also own Jolly Pumpkin. They were recently approved by the Royal Oak City Commission to open a Jolly Pumpkin location — the third for the partnership — on South Main Street in Royal Oak. They plan to invest nearly $2 million into that now-empty site and employ about 100 people, according to the application.

Lobdell and Carlson, along with operating partner Dan Glazer and other investors, opened Cafe Habana in 2007. A year later, they opened the Blue Tractor barbeque and brewery next door.

Lobdell and Carlson grew up in Traverse City and now live in Ann Arbor with their families.

Blue Tractor and Cafe Habana plan to collectively hire 80 to 100 new employees for the expanded restaurants.
With its expansion next door, Blue Tractor will
have room for an additional 100 customers, nearly doubling its capacity.

A venture fund administered by the business incubator SPARK Ann Arbor has invested $585,000 in two
local tech companies and another clean-tech company
from Detroit.

The investments came out of the Michigan Pre-Seed Capital Fund, which is administered by SPARK and assembled through Michigan’s SmartZones.

Ix Innovations, based in Ann Arbor, which deals in devices that measure output of low-power electronics.

To qualify for the Michigan Pre-Seed Capital Fund, start-up companies must be based on a technology in one of the state’s identified competitive technologies and have the sponsorship of a local SmartZone.

A new University of Michigan endowment will help students turn their business ideas into viable plans to attract investments. The Mayleben Family Venture Shaping Program is funded by Tim Mayleben, a local entrepreneur who is the CEO of the biotech firm Aastrom Biosciences, and his wife Dawn who is an administrator at U-M’s Erb Institute. Students do not need to be enrolled in the business school. Twenty-five teams will be granted cash prizes to conduct feasibility and other studies to prepare the businesses for launch.

Allure, a downtown boutique on East Liberty Street, has closed after 12 years. Owner Abraham Hejazi plans on opening a new store downtown within the next year.

The Smokehouse Grill and Pub, located on Washtenaw Avenue, has been sold and renamed the Brahma Steakhouse & Lounge under new owner Louie Vushaj.