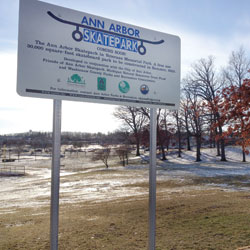 It will soon be grind time at the largely vacant corner of Veterans Memorial Park at Maple Road, which is being transformed into a state of the art skateboard park complete with quarter pipes, slappy curbs and volcanoes. A unanimous 10-0 vote by the City Council last month cappeed a 4-year citizen-led effort to build the skatepark, which is expected to open in September.

The nonprofit group of volunteers, Friends of Ann Arbor Skatepark, has raised $900,000 through private donations and matching grants to build and maintain the 30,000 square foot park, which will be the only one of its kind between Jackson and Farmington Hills, said the group’s treasurer Diana Kern.

“I have a nephew who is a skater and I had been driving him and his friends all over planet to skate,” she said.

Apparently the pre-fabricated ramps at the Buhr Park ice rink during the summer doesn’t satisfy the skater who needs to vert.

“We tried to include features that cover as many skate styles as possible,” said Friends President Trevor Staples. “That’s why we stretched to get as much input from every age skater and style skater as we could to make sure people are comfortable at the skate park.”

Staples said the skatepark concept was floated seriously in 2007 when skateboarder Stephen Kunselman was serving his first term on the city council. 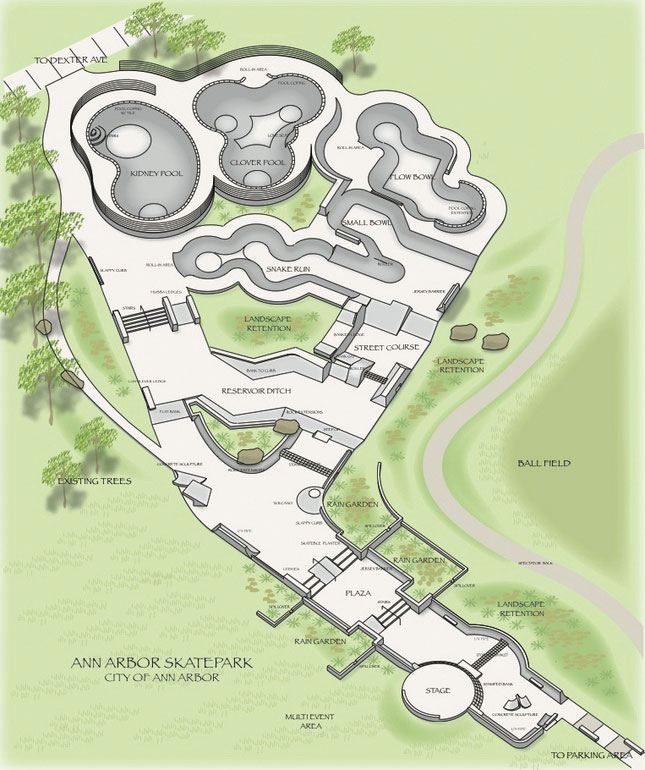 “I know him from back in the day. He hung out with the group that we learned from,” Staples said. “I was like, wow there’s a skater on city council. But that was when the markets crashed and the economy went in the tank. “Raising money for recreational activities is hard to do when people are losing their homes and having trouble eating.”

Kunselman returned to the Council in 2009. Since then, Friends of the Ann Arbor Skatepark has become more professional, mixing skaters with experienced fundraisers and grant writers. Over $100,000 has come from bake sales, car washes, skate races, merchandise swag sales and a huge skate jam with professional skateboarders Andy MacDonald and Shuan White.“That’s the way the skate community is; like a big family,” said Staples who still skates at 45. The group landed a $300,000 grant from the state’s Natural Resources Trust Fund and $400,000 from the Washtenaw County Parks and Recreation Commission.

Under the arrangement with the city, the group will be responsible for creating an endowment fund for about $10,000 in annual maintenance costs and repairs. They need to raise another $180,000 to fully endow the fund and to implement Hollyday’s complete design. The group is selling bricks for individuals and businesses as well as merchandise swag such as koozies, hoodies and t-shirts to raise the rest of the money, said Kern.

“Our goal is by the time it opens, we will have raised the balance,” said Kern. “That’s our major push right now.”

Skateboarding is not a crime

Offering skaters a place to get their ollie on also means saving police manpower from enforcing the city’s anti-skateboarding ordinance. Between 2000 and 2004 on University of Michigan campus alone, skaters were issued 868 citations, averaging 217 a year, according to the Friends group. Fines are about $50, which is twice the $25 civil fine for smoking pot in public, said the group.

“My nephew has so many friends whose boards have been confiscated,” said Kern. A skatepark probably won’t put an end to street skating, but it will offer unique obstacles not found in street settings. “When people get to start skating on a regular basis, the transitions and bowls and banks and snake-runs and everything else is going to open a new frontier and a lot of opportunities for some people who are strictly street skaters now,” said Staples.

For more information, check out  https://a2skatepark.org