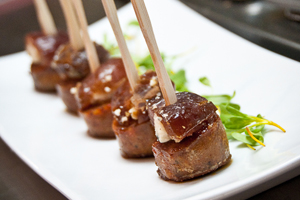 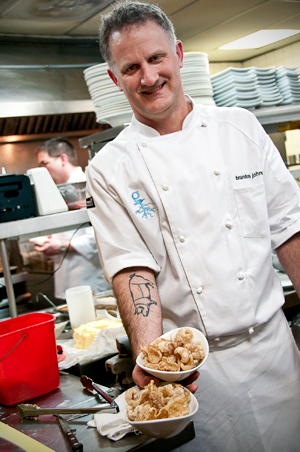 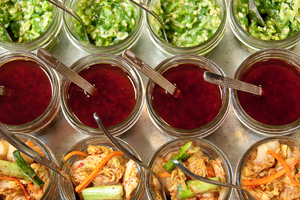 More people are wondering these days exactly where their food comes from. Those February strawberries are certainly not from Michigan, and who knows what hormones were pumped into that commodity cow before slaughter.

Eating local is a growing movement that promotes sustainable agriculture around smaller, local farms. And one of its tastier practitioners is Grange Restaurant and Bar in Ann Arbor led by Chef Brandon Johns.

Calling his practice ‘Farm to Table,’ Johns believes it’s good for the economy as well as one’s palate to dine on a pig from a family farm, along with fruits and vegetables just off the vine, rather than serving food off-season.

Grange, which was formed in August 2009 as a partnership of three families (Robert and Kate Cleveland, William and Christine Ayers and Brandon and Sara Johns), offers a dinner and Sunday brunch menu that seems to change by the week.

In the summer when Michigan fields are blooming, Johns will source 95 percent of his menu from farms within 150-miles. He still fetches 70 percent from local farms in winter.

“Food taste better when it’s closer to where and
when it’s harvested,” he said. “When you pick a stalk of asparagus, it’s starts going bad as soon as you pick it.” 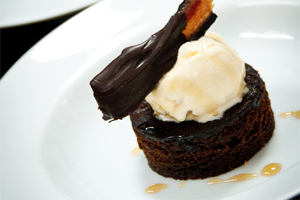 Buying from someone you know is also a more satisfying business model than walking through a storeroom with a clipboard, he said.

“It’s become a huge benefit for me personally, I’ve met a ton of people,” he said. “I’m part of a community. I’ve been to their houses, I’ve seen their land and how they do things.”

Placing small, local orders from multiple suppliers costs more; three times more, for example, for a pig raised on a farm with a capacity for 15 pigs at a time, compared to a “commodity” pig from a corporate farm.

But the local pig is fed better with more room to roam. So Johns uses the entire animal down to making his own sausage to get his money back.

“If I can get a lot of the animals whole, I can make money off the parts,” he said.

“We’ve had people walk out because they see fried pigs' head and are disgusted by it,” he said. “Then don't ever eat a hot dog.”

But Johns says his business is up 8 percent to 9 percent over the last calendar year.

Formally trained in New York City, he has cooked in kitchens in New York and Chicago.  Since returning to Ann Arbor, he has led the kitchens at the Chop House and briefly at Vinology.

But it’s at Grange where he was able to return to his roots and memories of growing up on an old farm with seasonal smells and flavors of wild strawberry patches and apple and pear trees.

“At the end of August, you could smell the grapes on the vine and taste the apple juice,” he said.

Running a Farm to Table operation requires a different mentality. It requires flexibility. The menu changes seasonally, but customers may experience daily changes, like a substitution for arugula, replaced by kale, because due to that recent frost.

“If you happen to order something early and the farmer doesn't have it because it frosted early, you have to be flexible,” he said. “That’s why we change the menu all the time.”