Fishing for a Saline treasure

French colonists have a North American history rich in flavor. While most relate French settlers with Louisiana, where they fished and trapped throughout the bayou, the Acadians were French settlers who went north into Canada in the 17th and 18th centuries.

Like their New Orleans counterparts, who lived off the bounty of the Mississipi Delta, the Acadians claimed their own fresh-caught culinary tradition, courtesy of the generous bays and rivers along the Atlantic Coast near Nova Scotia. Exiled from Canada by the British in 1755, more than 500,000 went south, joining their Cajun counterparts in Louisiana. That Cajun-Canadian connection created a unique cuisine marked by southern spice and olde world charm, found locally at Mac’s Acadian Seafood Shack.

A history of its own

That rich culinary heritage inspired owners Wally and Cindy MacNeil to open the downtown Saline seafood eatery in 1996. The sprawling restaurant, housed in the historic Murphy’s Crossing building, has become a landmark of its own.

Mac’s fare offerings are full of variety. Keep things casual by ordering a fried perch sandwich and a bowl of fresh-made gumbo, or opt for an elegant entree that showcases a variety of fish. The mix of influences that informs the food at Mac’s is intoxicating, and the ingredient options and preparations are actually exciting.

The menu is far from mundane, with NOLA-famous Shrimp Etouffee alongside Maple Glazed Bay of Fundy Salmon. But, what makes Mac’s tick is boundless curiosity, deep love of seafood, and an epicurean sense of humor.

Find your fill… again, and again 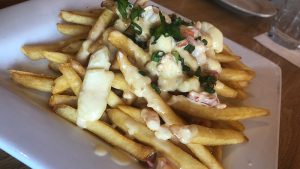 We ordered the Lobster Poutine while settling in at our table. The tower of French fries, buttery lobster and cheese curds, covered with gravy, was much more than a way to whet the appetite. Other starters include lump crab cakes, steamed Acadian Gulf of Maine mussels, and even fried alligator.

Selecting a main course may prove more difficult due to the menu’s vast array of options. For those averse to seafood, there are steaks, salads, and hearty burgers. Vegetarians will be pleased with the showstopping Mac’s Truffle Mac & Cheese.

But we didn’t visit a self-proclaimed “seafood shack” to eat the bounty of the land. We came for the seafood, eager to savor it in all of its glory. 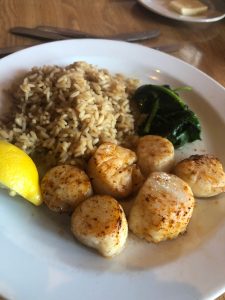 The Pecan & Cajun Crusted Whitefish, a surprisingly light dish, is full of flavor, served with potato pancakes and sauteed spinach and garlic. Perfectly-cooked plump broiled Maine scallops, accompanied by brown rice and spinach, were sweet and tender. Both dishes were sensible, palatable and well-executed, easily recommended for health-conscious seafood lovers who appreciate fresh and light meals.

Mac’s also satisfies desires for heartier seafood fare, like the shrimp and parmesan grits or the lobster & shrimp fettuccine. Or become satiated by a powerhouse— the Fisherman’s Linguini, a sinful mix of sauteed shrimp, calamari and mussels in a white wine tomato sauce. Deceptively simple and surprisingly elegant, we felt positively royal while eating this dish. The majority of the truly massive bowl was packaged to take home for future enjoyment.

Perhaps Mac’s most debaucherous opportunity is its happy hour, offered in the bar every day from 4-6:30pm. Early-evening enjoyment of a cocktail is available with a free order of mussels along with a laundry list of discounts on food and booze, including $1.50 apiece chef’s choice oysters and specialty drinks.

The Acadian hospitality at Mac’s, along with the food, will be to your liking, and you’ll leave with a little lagniappe.