After working closely with board-certified plastic surgeons in Ann Arbor, and spending 14 years as an expert in the field of aesthetic nursing, Shari Martuscelli, RN has opened Facial Innovations By Shari at 5245 Jackson Rd. The spa specializes in botox, dermal fillers, micro-needling, and more. 734-929-2288. facialinnovations.com

Grassroots Cannabis, which grows, processes and sells cannabis and is one of the largest multi-state operators in the nation, has opened a Herbology provisioning center at 2730 Jackson Ave. Herbology is part of a national brand that operates in seven different states. 10am-8pm, daily.
734-245-9309. herbologydispensary.com.
grassrootscannabis.com

El Arbol Taco has opened at 140 W. Main St., in the former Yum Yum Tree space. The Mexican street food restaurant is owned by Steve Pilon, the chef and owner of The Wooden Spoon, and his daughter Lauren Pilon. The taqueria and bar occupy both floors of the space. 11am-10pm, Tuesday-Thursday. 11am-11pm, Friday-Saturday. 10am-8pm, Sunday. 810-522-6750.
Elarboltaco.com

Pop-up bakery, Milk + Honey, has found a home at Bløm Meadworks, at 100 S. 4th Ave., Suite 110, offering a weekly menu of sweet and savory baked goods, loose leaf tea from TeaHaus and drip coffee from Detroit’s Anthology. See the week’s menu on Facebook and Instagram on Thursdays, before each pop-up weekend. A portion of profits goes to Ozone House, supporting homeless and at-risk youth. 734-210-1683. milkandhoneymakes.com

SkyMint is now open at 1958 S. Industrial Hwy. The new dispensary is part of the Green Peak Innovations, the state’s largest medical marijuana company, and is the company’s fifth store. 11am-7pm, daily. 734-627-7360. skymint.com

Ann Arbor arts and crafts store SCRAP Box has moved from 581 State Cir. to Washtenaw Ave., by Carpenter Rd. The new location will allow the shop to expand its educational programs. An opening date has not yet been announced. 734-994-0012. scrapbox.org

Veritas has opened at 151 W. Michigan Ave., in the former space of One Five One, which closed in 2014. The new, upscale restaurant’s sophisticated menu includes seafood, dry-aged steaks and a sushi bar. 11am-11pm, Monday-Thursday. 11am-midnight, Friday-Saturday. 11am-10pm, Sunday. 517-888-9001. Veritasjackson.comSALINE

After 41 years, Putterz Golf and Games owners Bill and Pat Chrysan have sold their business and retired. The new owners plan to keep the business open and have updates planned. 2675 Washtenaw Ave., 734-434-2838. putterz.com

After 14 years, The Quarter Bistro has closed. 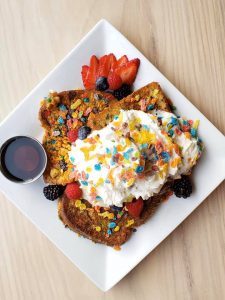 Find coffee, breakfast, lunch, dinner, a variety of drinks, and even nightlife at Social House South U, which opened in the former BurgerFi space at 1235 S. University Ave., at the corner of South U and S Forest. The all-in-one restaurant is an all-encompassing college hangout. 9am-10pm, Monday-Thursday. 9am-2am, Friday. 10am-2am, Saturday. 734-882-2134. Socialhousesouthu.com

We human beings are a storytelling species. Our social institutions— religious, legal and cultural— are based on narratives that may be fanciful or fact-based or influenced by precedent. But they are also ever-evolving. Throughout the winter and spring of 2020, Courtney McClellan, this year’s Roman J. Witt Artist in Residence at the University of Michigan

Propelling their new season into uncharted waters For many couples, the mere prospect of parenthood is daunting enough without the weight of the world bearing down on our backs. Yet as we take our first tentative steps into 2020, Australia is in flames, the U.K. is split down the middle by Brexit, and the sound

Thirty Years and Counting Jordan Stanton’s Impulse Ann Arbor documentary chronicles the techno music scene via MEMCO (Michigan Electronic Music Collective)— a university-affiliated group of student DJs, promoters, fans, and dancers. This DIY collective has roots that can be traced to 1980s Detroit. It’s a wonder to see how this music has evolved and thrived

Intimate and epic Americana to the Ark The three brothers of Brother Elsey are looking forward to the intimacy within The Ark. Brady, Beau, and Jack Stablein have been recording and performing a rousing blend of Americana and neo-country ballads for several years now, layering songs with evocative sheens of reverb, swelling harmonies, and road