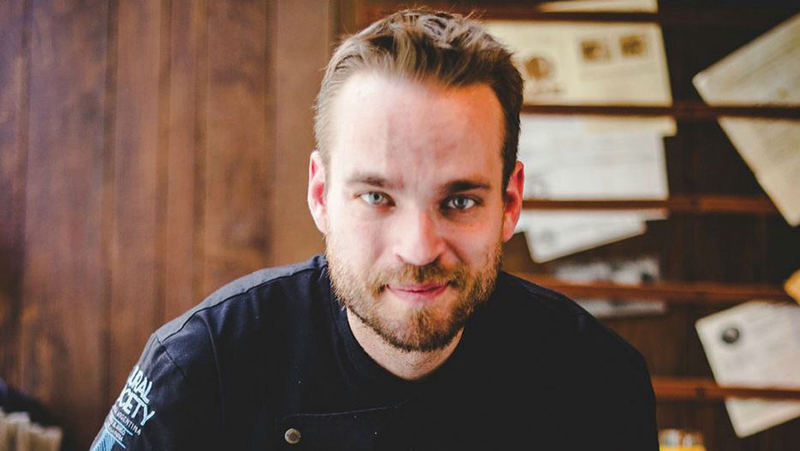 Louis Goral is a critically-acclaimed chef who has cooked all over the country, from Denver to Philadelphia to Chicago to Washington D.C. to New York City. Now, he has settled down in Ann Arbor to create music-inspired cuisine at the Blue LLama Jazz Club (a musician himself, he’s played the drums for over 20 years!). His innovative menu includes delicacies such as bacon-wrapped artichokes and charred baby octopus, to be enjoyed with the club’s live music. Goral discusses his love for cooking, his culinary inspirations, and his vision for Blue LLama.

How did you find your passion for cooking?

I began cooking with my grandmother at an early age in Iowa. We would make meat and potatoes dishes, desserts, pies, different things like that. And so that was kind of always part of my upbringing. I worked in kitchens through high school and college, but I never really took it as a serious career until I got to Denver and I found myself in need of a job. I wound up at a restaurant in downtown Denver called the Appaloosa Grill, and the sous-chef there became my mentor, and eventually, he became the executive chef and I became the sous-chef, and I’ve been doing it ever since.

Why do you enjoy it?

I really love the connection between food and experience. Using really great ingredients with people who are passionate about making those ingredients, from farmers to artisanal cheesemakers, olive oil producers, folks like that. And I love creating amazing experiences for people. When they come to my restaurant and they have an amazing time and enjoy the food and beverages and music, it’s something for them to remember. It’s impactful.

What is your favorite dish on the menu?

One of our favorite dishes right now is we’re doing a yuca gnocchi. Instead of using a potato to make gnocchi, we’re using yuca, which is a Peruvian root vegetable. We’re using some artisanal feta cheese from White Lotus Farms here in Ann Arbor, [as well as] some micro-greens of theirs with morel mushrooms and fresh spring peas. It’s just a really awesome dish, and it’s become one of the stars on the menu.

What vision do you bring to Blue LLama?

The concept for the menu is jazz-inspired American share plates. We typically think of our guests as people coming in and sharing an experience together. So that’s kind of where we got into the American share plates. Our concept of jazz music is that it’s inspired by many different regions and many different cuisine styles, from New York to Louisiana to Cuba to Paris to Chicago to St Louis. All these regions have had an impact on jazz music, so we didn’t want to pigeonhole ourselves into just one of those regions. We wanted to create something that was reflective of the diversity in jazz music and the culture of jazz.

When you’re making recipes, how do you draw inspiration from jazz music?

We began by researching what jazz musicians ate. For example, one of our inspirations was Billie Holiday, [who] said, in an interview that I read, that her favorite dish was a fried peanut butter and jelly sandwich. So we have on our menu a crispy Foie Gras peanut butter and jelly sandwich. That’s a fun, shareable thing that we have on our menu that’s inspired by Billie Holiday’s favorite food.

What do you want people to know about Blue LLama?

One of the more challenging things for us is conveying to the public that we are a jazz club, but we also offering an amazing food and beverage experience. I think people are starting to get that as we go. We also want people to know that we do brunch on Sundays, same style, share plates. We have live music on Sunday, as well. It’s really fun.