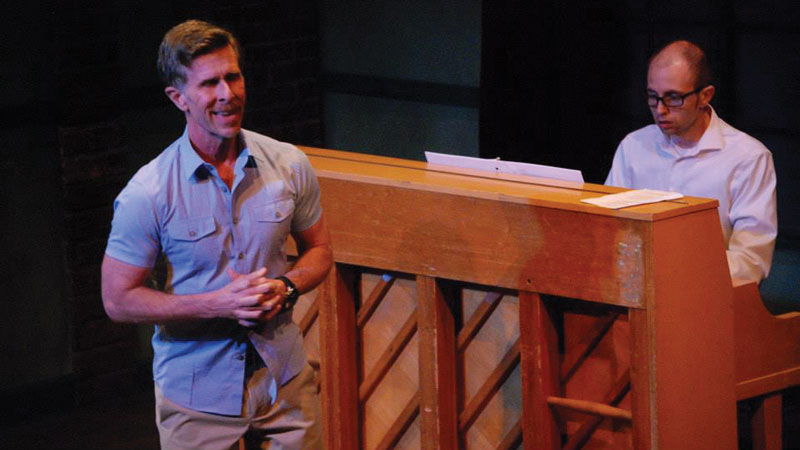 “She Loves Me”, the 1963 musical written by Jerry Bock and Sheldon Harnick, lacks the name recognition of the duo’s most famous show, “Fiddler on the Roof”. Nevertheless, the show has attracted a large and growing fan-base over the years due to regional productions and an award-winning 2018 Broadway revival. Phil Simmons, who directs Eastern Michigan University’s upcoming production, first fell in love with it thirty years ago. “I’m a Barbara Cook uber-fan”, he says, referring to the legendary performer who played Amalia, the show’s female lead, in the original Broadway production.

Despite a lack of recognition

Simmons understands the challenge of producing a show that is not well-known. “Audiences love name recognition”, he acknowledges, but for him, the rewards outweigh that challenge. “The audience comes out of the theatre after hearing beautiful music and experiencing an uplifting plot. Then they say things like ‘Never heard of it before, but it was great!’”

“She Loves Me”, adapted from the 1937 play “Parfumerie” by Miklós László, which also inspired the movies “The Shop Around the Corner” and “You’ve Got Mail”, is a sweeping, romantic story which takes comedic turns with mix-ups, blunders and more, before reaching a satisfyingly happy ending.

Musical comedy requires unique nuance and timing, and Simmons is confident that his students are up to the task. “EMU Theatre is a well-oiled machine, and it’s great to work with people whom I see in the hallways every day. We know each other so well—it’s a pleasure to work together. I also love the opportunity to meet and work with new Eastern students, and see them become more seasoned and better and better.”

EMU part-time Lecturer and Simmons’ long-time collaborator R. MacKenzie Lewis is the music director for the production. Their partnership, both at EMU and across the local theatre scene, has yielded many awards, and Simmons attributes this to their shared sense of humor, strengths that complement each other, and mutual encouragement.

“We take great care to support each other in decision-making and brainstorming and we’re especially good at layering new ideas onto each other’s existing ideas”, says Simmons. “It almost always seems that when one of us is in a bad mood or is unsure of something, the other is in a good mood and certain, which is invaluable during the rehearsal journey. And our real-life friendship makes it easy for us to tell each other when something isn’t working, or needs a little extra something.”

Even with so much good theatre in the area, EMU’s productions regularly stand out. “First, the plot is romantic and sweet and reminds us that it’s still possible to find true love,” says Simmons. “Second, the music is absolutely gorgeous and each song speaks honestly and openly whether the character is mad, sad, embarrassed or over-the-moon happy. Getting to see that kind of open, sometimes vulnerable, humanity set to such beautiful music is what musical theatre is based on.”