When the smash Broadway hit “Hamilton” opened in 2016, it garnered many fans that were new to the theatre. When the filmed stage show dropped on Disney+ on July 3, it made many more. If you’re newly in love with theatre, or even if you’ve long been an ardent fan, you may be looking for more filmed plays and musicals to watch, but are sick of wading through traditional streaming services to find something.

BroadwayHD is a streaming platform which flies a little under the radar, but is chock full of legendary offerings like the original Broadway productions of “Sunday in the Park with George” and “Into The Woods,” or new, fresh, and spellbinding shows like “The Last Five Years,” “Memphis,” and “Indecent.” Priced at $8.99/mo, it’s fairly reasonable considering how much the site offers, and it has a free trial for a week if you just want to try it. There are also many incredible plays on BroadwayHD, but that’s for another article — here are some BroadwayHD musical recommendations for theatre fans at all levels.

You can’t go wrong with the classics

If you’re in the mood for classic Rodgers and Hammerstein, “The King and I,” “Carousel,” and “Oklahoma!” all have glorious productions available on BroadwayHD. The West End transfer of the 2015 Broadway revival of “The King and I” stars Tony Award winners Kelli O’Hara and Ruthie Ann Miles, as well as Oscar winner Ken Watanabe. The singing is breathtaking, the acting chill-inducing, the dancing awe-inspiring and the costumes divine.

A concert production of a musical might sound like something to skip (although BroadwayHD has several stellar ones, including 25 Anniversary concerts of “Les Miserables” and “Phantom of the Opera”) but “Carousel” is not to be missed. The beautiful, dark story of troubled love is given the royal treatment by Kelli O’Hara, with whom you can never go wrong, Nathan Gunn and Stephanie Blythe of the Metropolitan Opera, and Broadway stars Jessie Mueller and Jason Danieley, as well as the New York Philharmonic providing the accompaniment. The result is nuanced, heartbreaking, and stunning.

The 1998 London Revival of “Oklahoma!” is best known for being a star-making vehicle for Hugh Jackman, and though it’s fascinating to watch his star rise right in front of you throughout the show, Trevor Nunn and Susan Stroman’s imaginative reinvention of the sweeping and dark but optimistic classic is perfect all around.

If classic musicals aren’t really your thing, BroadwayHD still has you covered. Elton John and Tim Rice’s “Billy Elliot” displays an electric score, and some of the most dynamic child talent seen on any stage. The 2016 Broadway revival of William Finn’s “Falsettos,” an intimate, groundbreaking musical about family, love, and faith, is a venerable who’s who of NY stage talent — Christian Borle, Andrew Rannells, Stephanie J. Block among others — and the musical crackles with wit, humor, and honesty. “A Night With Janis Joplin” explores one evening in the vibrant rocker’s explosive, painfully short but ultimately enduring career with a tour-de-force performance from Mary Bridget Davies.

“She Loves Me” is a masterpiece of a musical written by Jerry Bock and Sheldon Harnick, who wrote “Fiddler on the Roof.” It never got the same fame or appreciation as “Fiddler,” but the charming, funny, moving show (based on the play “Parfumerie,” which also spawned “The Shop Around The Corner” and “You’ve Got Mail) has garnered a well-deserved following over the years, and its popularity was amplified in 2016 due to an acclaimed Broadway revival starring Zachary Levi, Laura Benanti, Jane Krakowski, and Gavin Creel. That production became the first Broadway musical ever to be live-streamed, and has been on BroadwayHD ever since. It’s witty and soaring, light-hearted without being sappy, and you couldn’t ask for a better cast to find the balance of comedy and drama.

“Daddy Longlegs,” based on the classic novel, might sound ridiculous for several reasons. It’s a rare two-person musical, and tells the story of a young woman who has a mysterious benefactor she’s never met, but whom she writes letters to in hopes of one day knowing who he is and why he’s helping her. The strangeness of the premise is soon forgotten, and the charm of this quaint, enthralling musical soon shine through.

For one-stop shopping of the best of Broadway, visit broadwayhd.com. 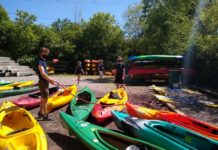