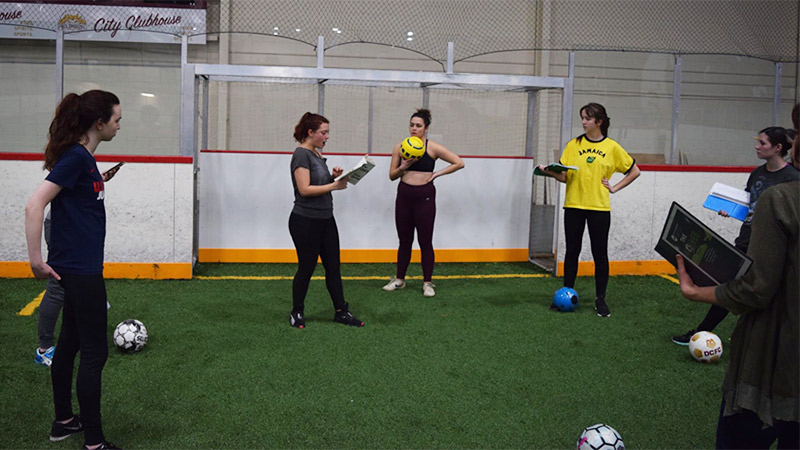 With the re-energized #MeToo movement still making headlines, and the record number of women elected to positions in government last November, we see many examples of women owning their narratives. Sarah DeLappe’s play, The Wolves, at the Slipstream Theatre Initiative from March 1st through 24th, offers a perspective on feminism that is rarely taken seriously. Current spoke with director Luna Alexander and members of the cast about this take on being a young woman.

How did you decide to produce The Wolves?

Luna Alexander: When we were trying to figure out what we wanted to do for Season Five, we wanted to tackle exciting new scripts as a break from our usual focus on classic themes. Jen, our Executive Director, and Bailey, our Artistic Director, asked if I’d read The Wolves. I devoured it in a night. I grew up playing soccer in Ann Arbor from the age of 5, and was looking to play through college when rehearsals for shows I was doing started to conflict. I had to choose between my earliest love and my newest one, and theatre won out.

To find a script that married those two loves was something I’d never imagined. A script that showcases young women— not teens, or basket cases, or sluts, or drama queens— but girls in all their glorious complexity, is incredibly rare. I fell in love with this script the moment I heard the dialogue— a symphony of competition, affection, and awkward adolescence that we’re all secretly trying to pretend we’ve left behind on a high school bleacher somewhere.

The play was a finalist for the Pulitzer Prize for Drama in 2017, but isn’t widely known outside the theatre community. What are the challenges and rewards of doing a less well-known show?

Tiaja Sabrie: It can be incredibly challenging to market a show the public doesn’t know, because you can’t rely on any common knowledge, so you have to be very precise in your marketing. People are coming in without preconceived ideas. It’s refreshing to do something that’s so contemporary— to give a voice to a story that we haven’t heard before.

In the current political and social climate, what does it mean to tell a story about strong young women?

Isabella Weiss: Getting the chance to do a show that’s got a large all-female cast, written by a woman and directed by a woman is such a rare opportunity. It’s unlike any show I’ve ever done before. To do a piece that resonates strongly with women of all ages is fantastic.

What do you hope audiences take from the show?

Grace Jolliffe: I hope people leave feeling they can view teenage girls in a more legitimate light and examine the way that we’re portrayed in media – so often our problems are trivialized or ignored. I hope this brings in a well-rounded perspective on who young women are.