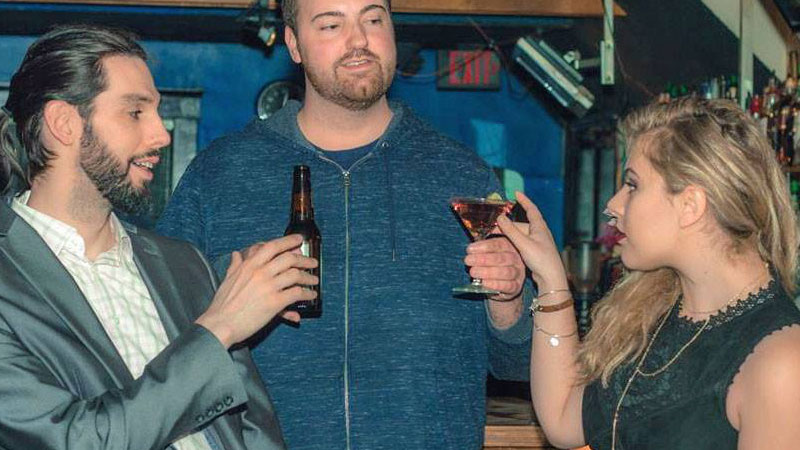 Musicals often deal with situations and time periods far removed from our own. That’s not the case, however, with “First Date,” written by Austin Winsberg, Alan Zachary and Michael Weiner, and produced by the Ann Arbor Civic Theatre. The show explores the harrowing dating scene in our present technological moment, and the ways in which our insecurities can get in our way. Current spoke with Director Aaron C. Wade about this refreshingly contemporary musical.

Tell us about the show’s premise.
“First Date” is about a blind date between a self-made but socially insecure man and a street-wise but emotionally wounded woman; they are in constant conflict with the voices in their heads who take on the shape of family, friends, and exes. The show turns what would be a painfully awkward conversation into a hilarious mystery of wits with plenty of welcome and unwelcome interruptions.

Who decided to produce “First Date” at A2CT?
I discovered the music on Pandora. After hearing three songs I took it upon myself to hunt down the soundtrack. Then, after discovering the script and realizing there’s so much more to the story than just a ‘90s era romantic comedy, I was compelled to flex what muscle I had developed in my brief three years of exposure to community theatre to pitch the show.

The dreaded first date – good or bad – is a universal subject. Does that help you as a director?
Several shows produced by A2CT this season have been startlingly topical, and this is no different. In fact, the story is more relevant now than when it was written in 2012 due to the tremendous influence of the Internet on relationships. The show highlights the slightly comedic, but also very serious consequences of prolonged psychological trauma. This is something I feel needs to be addressed.

What are the benefits/challenges of a nine-person cast — small for a musical?
Small musicals are slowly coming into the norm; you see similar successes with such shows as “Next to Normal” and “Now. Here. This.” Making the cast smaller allows an audience to have a closer connection to the characters. We have a cast of nine (which was grown from the originally prescribed seven); we might have had fewer but I wanted to cast women of appropriate age to portray a mother and a grandma. In a cast this size, everyone has several moments to stand out and shine.

Why should people come see this show?
Turning movies into musicals is becoming a trend, and original scripts are suffering because of that. “First Date,” an original script, lasted five months on Broadway, which is good, but it fell into obscurity. Audiences need to see this show and understand how good the music is, how true the characters are, how funny life at its chaotic core really is. Some moments in this story are so beautiful or sad that you can’t keep from crying. It deserves a broad audience, and I hope I can help others see how great this musical is.