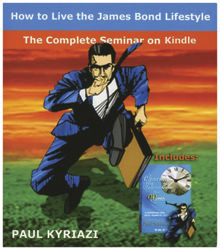 When film director/producer/author Paul Kyriazi published his course, How to Live the James Bond Lifestyle, in the late ‘90s, he didn’t predict that copies of the book would one day command bids of more than $1000 on eBay. After going out-of-print in the early 2000s, the book became something of a must-have for the Bond fan interested in discovering how to inject some of that 007 magic into their own lives. From how to check into a hotel like Bond to how to  handle your cash to how to woo a Bond Girl, Kyriazi’s course isn’t about going through life in a Tom Ford suit or carrying a Walther. It’s about setting goals, accomplishing missions, pursuing your dreams—and sticking it to villains.

Current caught up with Kyriazi, who lives in Japan, to find out about the new edition of the course, which has been professionally recreated for Kindle and iPad and is now available as an e-book from Amazon.com. Q would approve.

The book version of the course has been out of print for almost 10 years. What led you to bring it back in an audio version now?

Well, when the book went out of print, I expanded it and turned it into an audio course.. I had David Heddison (actor who played Felix Leiter in two Bond films—Ed.) giving a 12-minute introduction for the course and I added 50 more pages and a hypnosis session. The audio version was so powerful that I decided that the print version couldn’t compare—information must be shared in the most powerful way possible. But then I got an iPad and someone gifted me their e-book and I thought “This is cool.” The technology was very exciting and I realized this was a great way to introduce the material again. Plus, the price is great.

The new version has been expanded by almost 100 pages from the old edition. What does the new material cover?

What I like is all of the information that I’ve exchanged with fans about the course on Facebook. I got a lot of new information from those interactions, but I also like that I can talk about the new Daniel Craig movies and incorporate them into the course. One example of that is in “Quantum of Solace” when Bond gets his credit cards turned off. The first and last rule of the Bond Lifestyle is “I never run out of cash” and that film provides a perfect example of why that is so important. You can’t rely on credit cards.  It also hit me that in both Daniel Craig movies, Bond wears a seatbelt, which illustrates another Lifestyle rule—“Don’t take unnecessary risks.”

You emphasize the importance of never running out of cash. But what if you are broke and literally don’t have a penny to your name?

Yeah, that happened to me in the old days with my film career because I would put my own money into the productions. When you run out of money, the first thing you do is go back home. You sit, you make a plan, and you grab any kind of job you can. You just have to pull it in. One time I had run completely out of cash and couldn’t even get my car started for a couple of months. You just have to keep going. I actually use myself as an example of what happens when you don’t live by the (Bond Lifestyle) rules. So that’s it—you just have to stop buying magazines and going out to dinner. You simply must get a job, or a couple of jobs, until you get the cash back. There’s no shortcut.

Do you think the character of James Bond still has relevance in 2012? That over-the-top alpha maleness and chauvinism of the Bond novels and the Connery films seems rather archaic now.

I think Bond is more relevant than ever. About five years ago, I was talking to a female Japanese friend of mine and I was taking my time  getting dressed up and I said “Please excuse my male ego.” She responded by saying,” No, it’s OK. I was just telling a friend ‘What happened to the male ego?’” She was talking about how men never plan dates anymore, they don’t dress up anymore. There seems to be a lot of victim mentality these days. But Bond takes action, he gets the job done. So I think that Japanese woman is right. We need a little more male ego. Men need to take charge; not of other people, but of their own lives. We need Bond’s efficiency, that “never give up” attitude. And we need it more than ever.

How to Live the James Bond Lifestyle is available at Amazon.com as a Kindle Edition for $9.95.