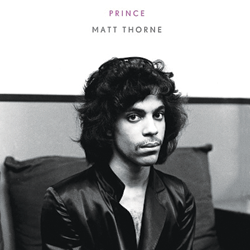 Dearly beloved, we are gathered here today to discuss a book; nay, THE book, on this crazy little thing called Prince. And, baby, it’s a star.
Much has been written about the legendary Minneapolis wunderkind Prince during the course of his 30+ year career, with bios ranging from the brilliant (“Prince: A Pop Life” by Dave Hill) to the mediocre (“Purple Reign” by Liz Jones) to the execrable (“Possessed: The Rise and Fall of Prince” by Alex Hahn). But author/screenwriter/lecturer Matt Thorne has written what should be the final word on the mad genius known as Prince Rogers Nelson. At a spine-busting 562 pages, there is now quite literally nothing more to say about Prince or his music. It’s all here—dance, sex, romance, and above all, the music. Oh my God, the music.

What immediately separates “Prince” from any previous bio written on the man is that Thorne avoids most of the clichés that typically befall the celeb biography. In an age of Kitty Kelleys and Andrew Mortons, Thorne doesn’t focus on the more lurid aspects of Prince’s life, nor does he even really tell the story chronologically. Little attention is given to Prince’s love affairs (outside of which muse inspired which song) or his personal eccentricities but Thorne analyzes  Prince’s music to an almost microscopic degree, dissecting his vast discography with an attention to detail that borders on being overwhelming. Filled with fantastic interviews with former Prince collaborators including Dez Dickerson, Matt Fink, Wendy Melvoin and Lisa Coleman; even ol’ Chris Moon, who gave Prince his first crack at a professional recording studio way back in the mid-‘70s.

Obviously, this book will only really appeal to Prince fans and to music scholars who truly wish to understand the true depths of Prince’s artistry and genius, but those purple-minded freaks who can breathlessly describe what it was like the first time they heard Prince will find this book to be downright orgasmic. Pop culture and music theory professors across the world will no doubt be sending their students to the college bookstore to buy this tome and considering what a page-turner it is, this one will unlikely be returned on “sell your textbooks back” day (for the record, physical copies of “Prince” aren’t yet available in the States yet but you can order the paperback edition from Amazon’s UK site. The Kindle edition is readily available at the regular Amazon site.).

Thorne does an amazing job of not only charting the course of Prince’s artistic development but of showing exactly how and why Prince still matters in a day when no one really buys CDs anymore and the only way an unknown artist stands a chance of being signed is to appear on “American Idol” or “The Voice” or to become a YouTube sensation. While Prince was one of the true pioneers of the online music world (he mentioned the concept of file-sharing as far back as ’95 in the song “Get Wild”), he ended up renouncing the Internet as “dead” just a few years ago. There’s no official website, no Prince videos on YouTube, and he hasn’t followed the road usually taken by other aging music titans by remastering and rereleasing his back catalog with outtakes and extra tracks. Thorne may be an amazing journalist and researcher but he’s also clearly a fan and he gets just as frustrated with Prince as all of us who continued to buy his albums during the years when he was writing ‘Slave’ on his face and using that male/female symbol as his name. And let me tell you, if you declared yourself a Prince fan during those wilderness years, you often got some pretty frosty looks.

But “Prince” reminds us that despite Prince’s many missteps (like, oh, say, “discovering” Carmen Electra), this enigmatic man remains one of the few musicians since the invention of rock-n-roll to ever have truly been touched by genius. Thorne has accomplished a truly remarkable task by producing the definitive work on one of the world’s most important artists—not an easy thing to do. But he’s done it.