Elephant Revival at The Ark 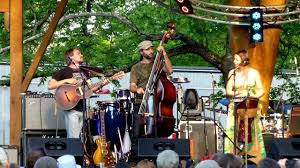 Elephant Revival, self-described as a “progressive transcendental folk quintet” will be performing with Dead Horses at The Ark on Wednesday, September 21. The Colorado based band just released their 4th album, Petals and Elephant Revival has been on tour for the better part of the summer.

Bonnie Paine (washboard, djembe, musical saw, stompbox), one of the chief songwriters of the band, caught up with Current to tell all.

Getting the band together

The whole story of how the band got together in the first place is some sort of escaped dream from Woodstock.

Paine met Daniel Rodriguez at an open mic night in Connecticut, and to hear her tell it, “Him and I ended up on the roof and playing until sunrise. That was our first musical bond.”

The rest of the band all collided at the Winfield Bluegrass festival. “I got really still and listened as far as I could. I heard this really funky stand-up bass, so I found my way to where that was and that was where Dango Rose was playing. I ended up playing with him. We would play whenever we could. That was the beginning. We were all spread over the country,“ she said.

Still keeping in contact, the band was spread all over the country and Rose found himself busking in front of the Lincoln Park Zoo elephant cage. “There were 3 elephants in the cage and two of them got sold to another zoo. They all died from unexplained reasons. He thought they died from heartbreak because they were together for 16 years before they were separated. He said that this was a sign for all of us to come together from all of our different places in the country to come together as a band. I got a text message that said “Elephant Revival Concept?” and a list of dates and venues,” Rose said.

It was basically “Do you want to play these gigs under this name?” and they did. Eventually they took the concept out of the name and were officially Elephant Revival.

Now performing their 4th album, Elephant Revival is in the midst of a summer tour. One summer night, the band was sleeping on the bus and Paine recalls someone mumbling “Smoke” in their sleep. She remembers repeating it back as a question then woke up to the bus caught on fire.

All of the band members made it out of the bus unscathed, but their instruments did not. And they had a show the next day, “When you have an opportunity to persevere, sometimes magic can happen. We ended up playing the show that night anyway. It was a different kind of strength,” Paine said.

From Paine’s perspective, It seems as though the bus fire was apart of the exploration together like the album is of their experiences. That attitude and thought process is how she looks at the album, too, “[The album is] a documentation of the exploration that we’ve had together. It’s fun to have that in the form of the album. It’s exciting for me to have some more colors in the palette to play with. We had a really good time making it.”

Paine and Rodriguez are the principal songwriters and begin the songwriting process.

“Daniel or I will write the song alone and present it to the band,” Paine said. “Then everyone fills in their parts, unless the writer has something specific in mind. Generally it is nice to hear what everyone else comes up with because everyone is good at improvising.”

While she could go through and tell each member their part, she prefers to let it happen more naturally, “If I try to walk them through it, it takes the fun out of it for people. It’s more of an exploration when you can find your way through the song,” she said.

“My relationship with music has been less meticulously writing a song and determining which parts go where and more of letting the song come through, before I get my editing self involved,” she said. This sort of natural instinct and peacefulness towards songwriting starts at beginning. She often says the phrase “what the song wants” when describing this process.

This same songwriting process has followed the band through their albums, “We generally start songs out with the washboard with stand-up bass, violin, banjo and guitar-our original structure. And throughout the set we will start switching instruments around and varying it up. That’s the way things have evolved over the years,” she said.

Elephant Revival is coming to the Ark this Wednesday and from the sounds of it, they are very excited about it, “It’s the most intimate show we do anymore. It’s a very personal experience.It makes my heart pound every time I play there. Everyone is listening so closely. You don’t get that everywhere. You can feel people listening in that room.”