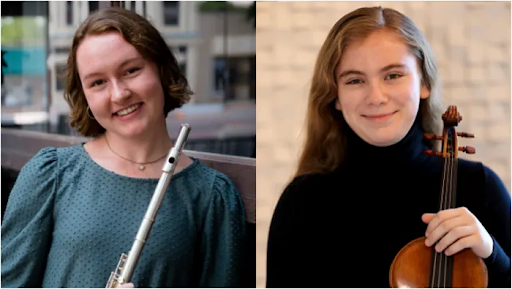 The 2021 chapter of the Ann Arbor Symphony Orchestra’s Young Artists Competition has come to a close and two winners have been announced.

Flutist Abi Middaugh and violinist Lily Sullivan were among twelve finalists in December of 2021, and were victorious, earning their chance to perform in an Ann Arbor Symphony Orchestra youth concert in 2022.

Abi Middaugh is a high school senior at the Early College Alliance at Eastern Michigan University. She studies flute with Kelly McDermott and is a proud member of the University of Michigan’s Youth Orchestra, Eastern Michigan University’s Wind Symphony, and is a principal flute of Interlochen Art Camps 2021 Youth Symphony Orchestra. She was also the winner of the Washtenaw Community Concert Band Concerto Competition in 2020 and the North Dakota State University National Music Competition in 2021. Abi plans on studying flute performance to become an orchestral flutist.

Lily Sullivan is a merit scholarship fellow at the Music Institute of Chicago’s academy for pre-college musicians. She studies violin with Grigory Kalinovsky and is a member of the Dando Piano Trio at the Music Institute of Chicago. Lily has received many awards for her performance including the Ladonna Dingledine First Prize for her age group in the Muncie Symphony Orchestra Young Artists Competition, the statewide Junior division winner of the MTNA Competition, and was chosen as a Young Laureate of the 2021 Chicago International Violin Competition.

More information on Abi and Lily and the Ann Arbor Symphony Orchestra can be found here.