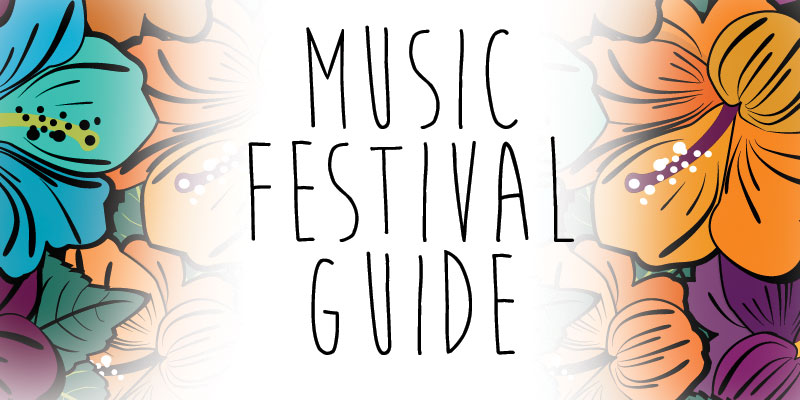 Shake off the winter blues and let the warm summer tunes fill the air. By late spring, the outdoors come alive with the sound of music— festivals, that is. Music festivals throughout the region are ready to get you in the summer mood. Deciding which festival(s) to attend can be a difficult task. So, here is a list of regional festivals and what to expect, from musical variety and price to distance from home. See ya there!

Headlined all three nights by the Dark Star Orchestra (beyond a Grateful Dead tribute band, this group follows exact set lists from Dead shows over the decades), the jubilee is a festival of improv tunes from bluegrass to funk. With talented groups like Los Lobos, Robert Randolph & The Family Band and Keller and the Keels, the Dark Star Jubilee is the perfect fest for those looking for a smaller-scale gathering.

One of the largest midwest music festivals, Summer Camp fulfills the craving for live music. Now in its 14th year, the festival’s headliners mix up the genres for three nights. Some of the impressive improv bands performing are moe. (performing 5 sets!), Umphrey’s McGee (5 sets!), Steve Miller Band and Widespread Panic, along with a good genre mix-up of acts like Trampled By Turtles, Paul Oakenfold and STS9. What better way to spend your 3-day-long, Memorial Day Weekend, than with thousands of people, smack dab in the heart of Detroit – Rock City, enjoying electronic music from a list of EDM who’s-who. Pack your glowsticks (and perhaps earplugs for newbies) and let your inner electricity permeate through for all to see.

Cleverly titled “Bunbury” after a fictional character in Oscar Wilde’s play The Importance of Being Earnest, at Bunbury you will enjoy a variety of music alongside eco-friendly initiatives. Nestled inside Sawyer Point Yeatman’s Cove alongside the Ohio River separating Ohio from Kentucky, Bunbury includes over 100 performances on its handful of stages and out-of-this-world local fare. With headliners The Black Keys, The Avett Brothers and Snoop Dogg, all you need to do is “bee free”.

Now in its fifth year, Govs Ball delivers a lineup for sheer magnitude with headliners Drake, The Black Keys, Bjork, Florence + The Machine, Deadmau5 and Lana Del Rey. The eclectic and impressive lineup features music from all genres with many local acts incorporated into the popular NYC fest. More than 50 local food trucks line up for hungry and hot attendees to eat, and thought-provoking interactive local art installations allow for play throughout the festival grounds.

Named after Dr. John’s 1974 album Desitively Bonnaroo, many would like to know that the term Bonnaroo means “a really good time”. And that is exactly what festival-goers will receive. With attendance around 90K+, Bonnaroo delivers a fantastic annual lineup, and this year is no different. With headliners Billy Joel, Mumford & Sons, Deadmau5, Kendrick Lamar, Robert Plant and the Sensational Space Shifters and Florence + The Machine, Manchester will rock for four days as the festival’s “really good time” continues on for another record-breaking year.

Now in its fourth year, this ever-growing festival takes place on the 105-acre grounds of The Woodlands at Dover International Speedway. Dubbing itself “The East Coast’s Premier Music Experience”, Firefly features high-profile headliners from Paul McCartney, Kings of Leon and Morrissey.

Appalachian Jamwich presents a weekend jam-packed with tunes. The Werks with accompanying artists Earphunk, Raising Appalachia and Dopapod, among 20+ other groups make for an entertainingly mad party.

At Tec-Troit, not only will you hear electronic dance music from all areas of the festival grounds, but you will also hear and feel camaraderie and the selfless act of making a difference. Join R.A.W.S. (Ravers Against World Starvation) and help bring a little light to someone’s tough time, by toting along a non-perishable food item (or two) to help a local family in need. Through your donation, you will receive 2 glow bracelets for your Tec-Troit experience. The lineup includes local musicians Mike Agent X Clark and SHERIF along with 20+ supporting acts. With approximately 28 times as many acreage as Bonnaroo, Electric Forest is the jungle-gym for festies. Filled to the canopy with light installations and interactive art, this wooded festival will take your breath away. Electronic headliners Bassnectar, Skrillex and Kaskade play alongside The String Cheese Incident (performing 3 shows), and feel-good acts like Edward Sharpe and the Magnetic Zeros and the anticipated collaboration of Galactic with Macy Gray. The fest is sold out, but if you scour the internet, you just might stumble upon some golden (or glowing) Electric Forest tickets.

All Good Music Festival & Camp Out

Now in its 18th year, All Good is one of the more popular gatherings for bluegrass and folk. Having expanded the musical variety in recent years to include reggae and funk, the jam-band-heavy festival makes it way to eastern West Virginia this year, from its familiar Ohio location. This year’s headliners include Primus, Thievery Corporation, moe. and Cake.

The longest and largest travelling US music festival, the tour is now in its 20th year. Known for being the kick-start for a handful of popular artists, like Blink 182 and Katy Perry, the originally known-for punk music festival now appeals to a much wider audience, as it includes everything from pop to punk, and of course, a half-pipe for skaters.

Bon Iver's Justin Vernon and The National's Aaron Dessner have joined their creative powers to launch this 2-day visual and auditory art show. In its inaugural year, Eaux Claires boasts performances from big indie acts like Spoon, The Tallest Man on Earth, Sufjan Stevens, and of course the co-creators' bands, as well as more under-the-radar gems with sets from Lizzo, Melt-Banana, and Phox, among many others. If your ears get tired from the fantastic music, check out the stunning experiential art that will be all across the grounds.

This festival is truly a gem, nestled within the heart of the Windy City. With an alternative rock/hip-hop heavy bill, the lineup for Pitchfork is the perfect mixture of avant-garde for a musical pick-me-up. This year’s headliners, Wilco (while not hip-hop, still worth seeing) and Chance The Rapper perform with supporting acts Run The Jewels, Ariel Pink and the experimental band, Panda Bear amongst one of the widest variety of genre and genre-defying lineups for an overload of musical waves.

Ideally located alongside Louisville Waterfront Park, Forecastle is a front-runner with one of the year’s strongest lineups. Alongside its maritime theme (forecastle refers to the upper deck of a sailing ship), the fest features a variety of local art and environmental non-profits and outdoor organizations highlighting The Forecastle Foundation’s dedication of “re-building the world’s natural awesome”. Its impressive lineup includes 4-time Grammy Award winner and headliner Sam Smith, as well as other notable acts like My Morning Jacket, Widespread Panic, Modest Mouse and Big K.R.I.T.

Take a break in the mid-of-summer for some feel-good country music. Join the thousands of attendees with their boots and cowboy hats as headliners Brad Paisley, Carrie Underwood, Florida Georgia Line, Dwight Yoakam and The Cadillac Three rock the stage, alongside many other country heavyweights. This year’s festival will make its Detroit debut with a bang. Headliners Modest Mouse, Passion Pit and Brandon Flowers (of The Killers) take the stage alongside 15+ other groups for a weekend of variety and rock-n-roll.

Yes, we know this is in Canada. But those with passports can enjoy a festival worthy of crossing the border. In its inaugural year and with headliners Sam Smith, Kendrick Lamar, Alt-J, Bassnectar, Broods, Cold War Kids, Modest Mouse and Hozier, you can attend a festival produced by the company behind Bonnaroo and Forecastle, with a significantly shorter drive and perhaps, half the attendance. Known for its over-the-top and widely impressive lineup, Lollapalooza is the perfect music festival for a fast-paced city. Even though this year’s Lolla is sold out, don’t give up on your chance to see Paul McCartney, Metallica and Sam Smith on the headlining stages… tickets are always floating around in the wonderful world of the internet.

The Werk Out Music & Arts Festival

Do you want a small festival feel with the artistic experience of a larger-than-life fest? Travel to central Ohio for three nights not-to-miss acts, as you live it up with The Werks (performing for three nights), Papadosio (2 nights), Dopapod (2 nights) and Lettuce. But, remember to BYOB, no alcohol will be sold on campus. Featuring four days of camping and an on-site water park (to which, admission is included in the ticket price) festival-goers will enjoy the music, while having fun in the sun and splashing around. With headliners Gregg Allman, Santana, Bob Weir with Billy & The Kids and Willie Nelson & Family alongside an impressive list of musicians, The Peach Festival is a good time.

Spend three days inside the forest enjoying a variety of diverse acts, from Greensky Bluegrass to the supergroup Hard Working Americans.

Looking for a loud, riot-filled weekend? Riot Fest delivers. With its punk-rock heavy music bill, in 2012, Riot Fest had expanded to include carnival rides, games and vendors. Popular for its once-in-a-lifetime collaborations and highly anticipated musical reunions, there is much to look forward to come mid-September.

Close out the summer music season with a weekend filled with three days of tunes. TURF weekend features an all-star line-up of 49 artists, including headliners Of Monsters and Men, The Avett Brothers, Neko Case and Wilco.

*Note that lineups and ticket prices are subject to change. There is always the possibility that one or more of these festivals could sell out.