The Bars of Washtenaw County 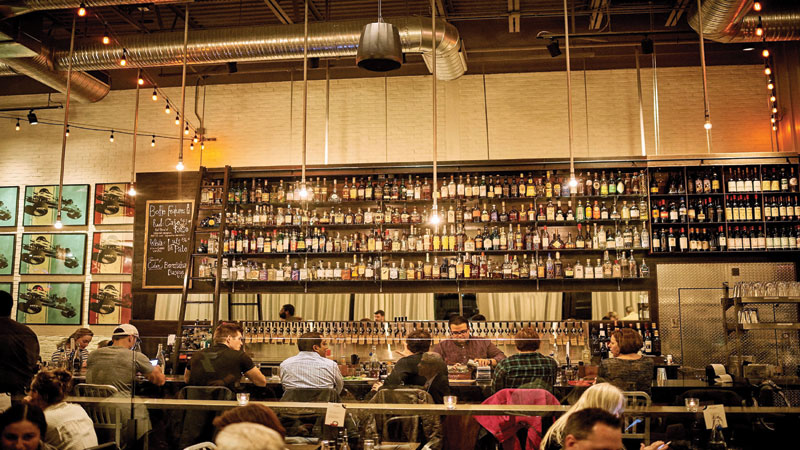 Long-time townies may remember browsing the stacks of Borders in the 1990s, when Robert James Waller’s The Bridges of Madison County was a runaway bestseller. The romantic, if sappy, story of Robert and Francesca’s brief love affair may have tugged at heart strings everywhere, but we here at Current have our own long-standing love affair – with the many unique and interesting watering holes that dot our area’s landscape. Borders is long gone, but the number of quality places to get a tipple have proliferated. We’re truly blessed with a place, and a beverage, for every style, taste, and mood. This love affair prompted us to embark on an odyssey to just a few of the establishments that have captured our hearts – and may capture yours, too. Dear reader, we present to you “The Bars of Washtenaw County.”

3050 Washtenaw Ave., Ste. 112
Ann Arbor | Bigalora.com
What to try: Wash down your weekend brunch with Death in the Afternoon, an absinthe and Champagne cocktail invented by Ernest Hemingway and named after his book on bullfighting, given a twist here with Spanish cava and a pinch of sugar.

You can pass many a happy hour at Bigalora’s long bar, which sports not only 40 tap lines but also one of the largest walls of booze in Ann Arbor. The light, open space is a great place to throw a few back while you also enjoy the growing chain’s justly famous gourmet pizzas. 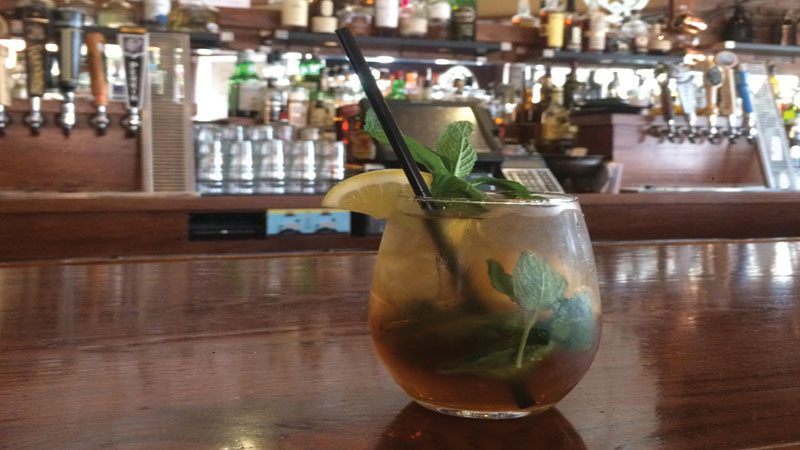 101 W. Michigan Ave. | Saline
What to try: For the perfect palate-cleansing aperitif, order The Cooper, made with Bulleit Bourbon, Anisette, limoncello, mint, and lemon.

This quaint English-style pub and restaurant takes its name from Brecon, Wales, Saline’s sister city. Belly up to the intimate wood bar for drafts of Michigan beers, choose from a sizable wine list, or check out the menu of signature cocktails, all while enjoying house specialties inspired by the United Kingdom such as fish and chips, corned beef hash, and more.

500 W. Main St. | Brighton
Brewerybecker.com
What to try: Vargdricka, a taproom favorite described by head brewer Matt Becker as a Scandinavian farmhouse ale based on “the daily drink of vikings,” is a light amber ale bittered with bog myrtle and juniper.

Located in a beautifully restored 1873 hotel in Downtown Brighton, Brewery Becker offers an inviting atmosphere of brick and wrought iron in which to enjoy a wide variety of hand-crafted beers, many of which are based on recipes at least as historical as the taproom itself. 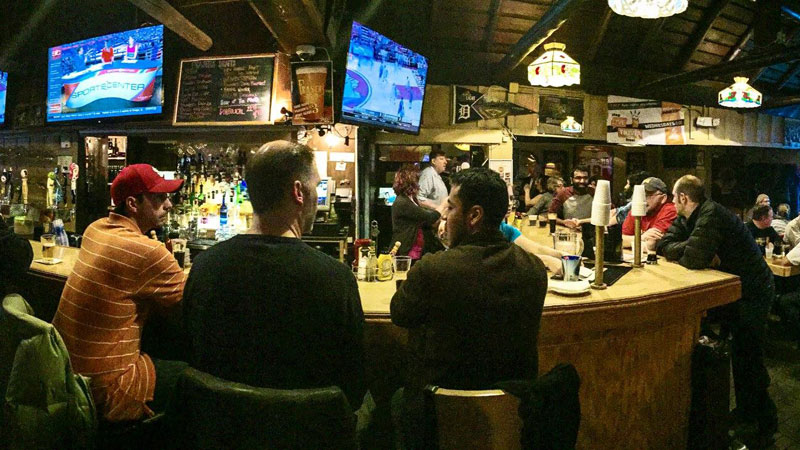 2045 Packard St. | Ann Arbor
Fraserspub.com
What to try: Sunday Loaded Bloody, named by MLive.com as the state’s second best Bloody Mary, is made with New Holland vodka and bloody mix; spiced up with steak and hot sauces, pickle and olive juices, and pepper; then topped off with a splash of stout, a Cajun-seasoned glass rim, and a loaded skewer of various olives, cheeses, and meats.

For more than half a century the squat tan building that is Fraser’s Pub has welcomed thirsty townies into its dim but warm embrace. In recent years the popular neighborhood sports bar has upped its drinks game, accommodating those comfortable in a vintage neighborhood bar setting alongside those seeking the latest and greatest brews. 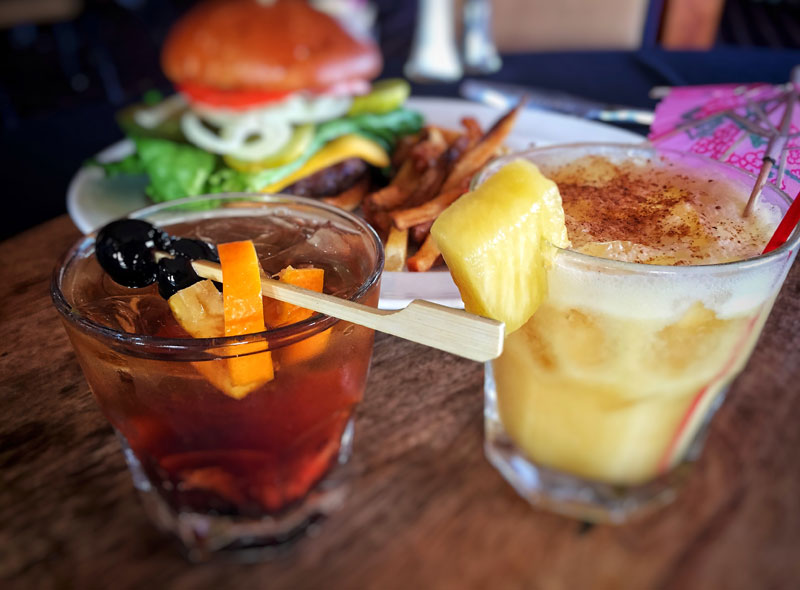 6005 Gotfredson Rd. | Plymouth
Karlscabin.com
What to try: You can’t go wrong with a classic Old Fashioned, made with Old Forester Bourbon, or, if you’re feeling tropical, try the Caribbean Painkiller, made with Pusser’s Rum.
Built as a country roadhouse in 1945, Karl’s Cabin is reputed to have once played host to a traveling young singer named Johnny Cash as well as to any number of drunken fist fights. Today the space enclosed in dark log walls continues to be a venue for live music, hearty food, and fine beverages, but the bare-knuckled brawls of yesteryear thankfully remain in the past. 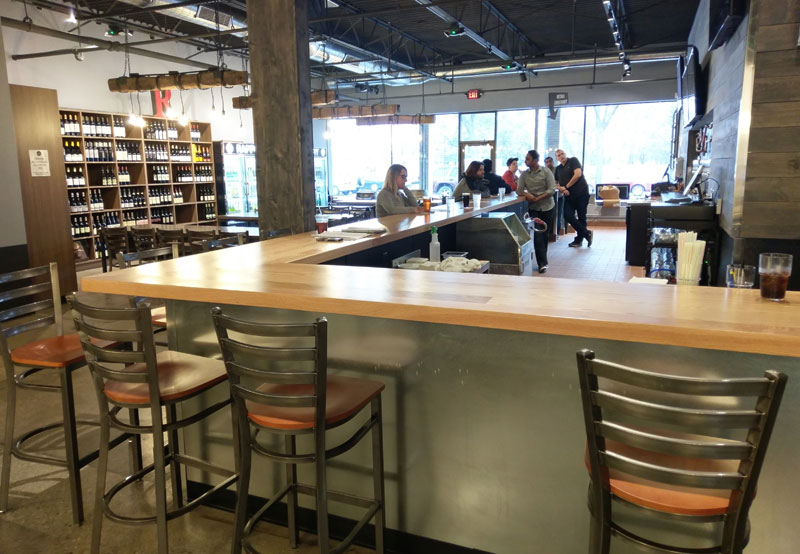 Rappourt opened on Ann Arbor’s north side in February, making a bold statement with its long, modern bar featuring 48 tap handles of beer, wine, cider, and mead. The space formerly occupied by the Wine Seller retail shop has been transformed into a bright, sleek venue for enjoying a carefully curated menu of craft beverages and gourmet dishes. 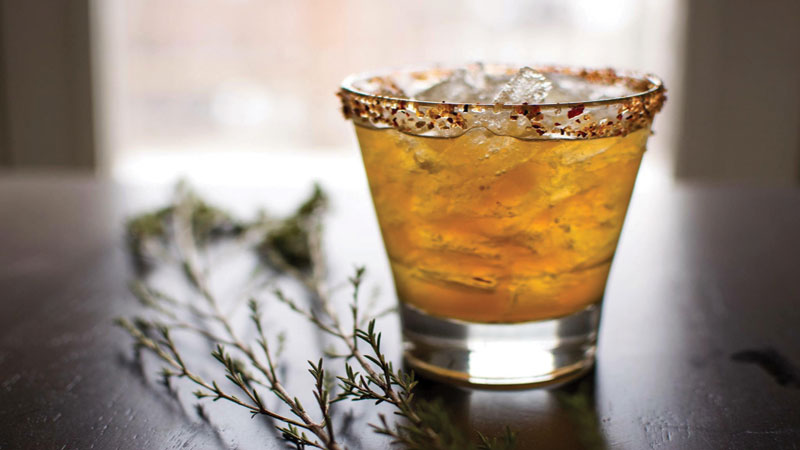 8093 Main St. | Dexter
Redbrickkitchen.com
What to try: What its name may lack in creativity, the Mezcal Cocktail more than makes up for in imaginative, flavorful ingredients including Dos Jaimes Mezcal Joven, Cynar, agave, and fresh lemon juice inside a smoked black sea salt and peppered glass rim.

As its name implies, Red Brick boasts an atmosphere of exposed nineteenth-century brick wall, accentuated with warm, modern wood. The cozy space in the heart of Downtown Dexter is classy without being stuffy, offering a respite from the Main Street bustle just outside its doors. 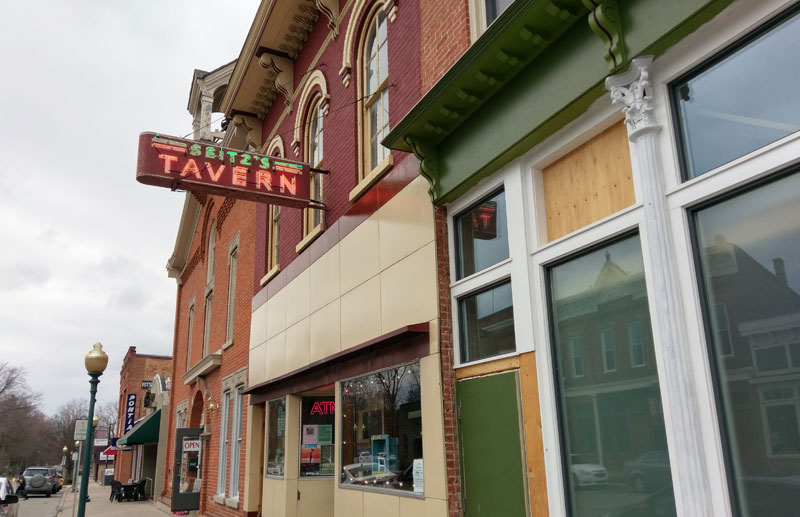 110 W. Middle St. | Chelsea
Find them on Facebook
What to try: Beer and a shot. If you’re feeling adventurous, don’t specify your brands and leave it up to owner/bartender Randy, the self-proclaimed “last of the Seitzes.”

Look up “unpretentious” in the dictionary and next to the definition will be a photo of Seitz’s Tavern, a 101-year-old family-owned bar hiding in plain sight amidst the tonier establishments of Downtown Chelsea. From the deer heads adorning the walls to the antique cash register to the lack of any bar stools, this place is a throwback to a time when people got the news from their “local.” 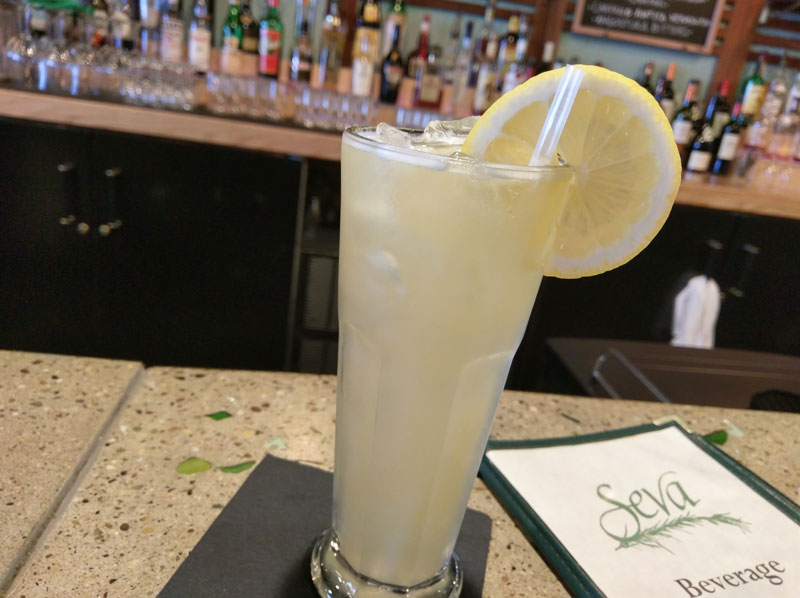 2541 Jackson Ave. | Ann Arbor
Sevarestaurant.com
What to try: Made with bourbon, lemon and simple syrup, soda, and a bracing shot of fresh ginger, the Ginger Julep is a refreshing way to welcome in spring.

Following its 2014 move to the city’s west side, Seva continues to thrive in its fifth decade as Ann Arbor’s premier vegetarian restaurant. The airy, open space and hand-made cement-and-glass bar are the perfect setting to enjoy an incredible happy hour that is one of Tree Town’s best kept secrets. 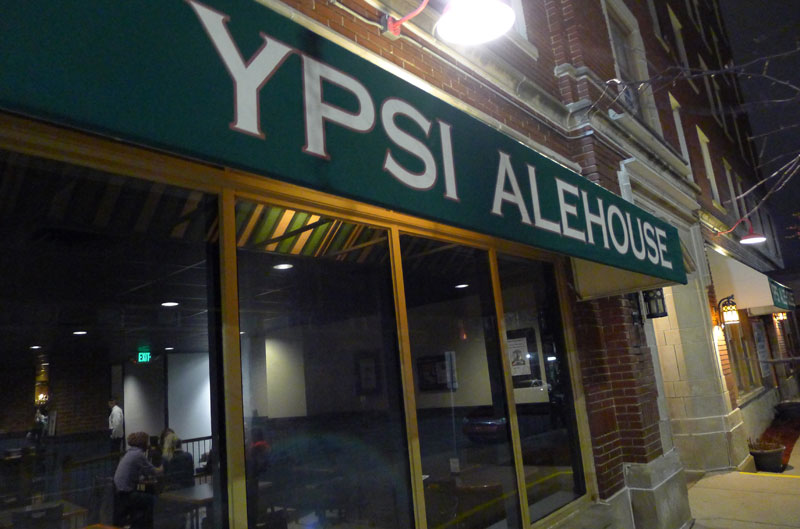 124 Pearl St. | Ypsilanti
Ypsialehouse.com
What to try: The Blue Racer – brewed with all-Michigan wheat and barley malts, hops, and honey – is as much fun to watch as it to drink: It’s topped off with Michigan-grown blueberries that bob up and down with the beer’s lively carbonation.

Occupying the first floor of what in the 1920s was the Huron Hotel, the Ypsi Alehouse has the distinction of being the second commercial brewing venture for co-owner Ted Badgerow, who in 1982 founded Michigan’s first modern microbrewery, Chelsea’s Real Ale Company. Today Ted’s creations can be enjoyed in a historic if spartan space that most recently housed a national chain restaurant.