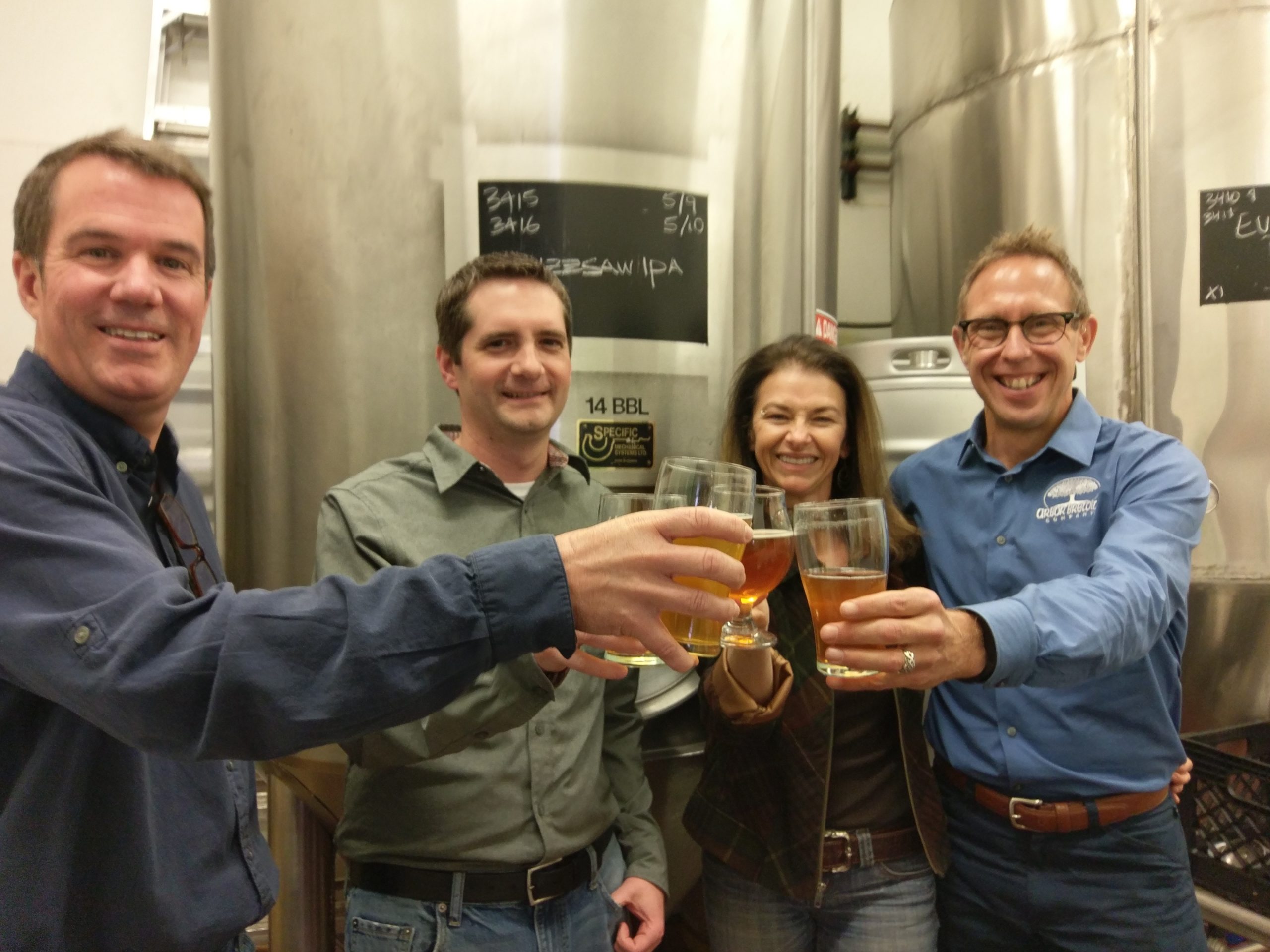 It’s been a staple on downtown Ann Arbor’s Washington Street for more than two decades, and now the Arbor Brewing Co. Brewpub – along with its sister establishment, Ypsilanti’s Arbor Brewing Co. Microbrewery – is entering a new chapter in its business evolution.

Owners Matt and Rene Greff announced on Thursday that Arbor has become a part of Farm + Ferment, a family of Michigan-based businesses focused on craft beer, cider, and wine making. The new partnership sees the Greffs relinquishing ownership over the day-to-day operation of the businesses.

“Matt and I are shifting from more of an operations focus to a brand promotion focus,” said Rene. “So basically someone else gets to do the unpleasant stuff and we get to have all the fun.”

Included under the Farm + Ferment umbrella are several Michigan orchards, vineyards, and hop farms, including Northport Farms, Baia Estate Vineyard, and the Michigan Hop Alliance, a network of hop growers that joined in 2016.

“Farm + Ferment is a new umbrella company that will focus on brewing, cider, and wine making,” said Brian Tennis, founder of Michigan Hop Alliance. “My role will be to focus on our hop operations, overseeing our hop yards, brokering hops both foreign and domestically, and working closely with our network of over 600 breweries around North America and Europe. I’m excited to work with everyone at Arbor and will be providing the brewery with the best hops available, with a strong focus on Michigan-grown ingredients.”

“What’s awesome is we get to be involved in all aspects of brand growth, working with Brian on hop selection, growing the sour beer program, and other things like that because we’re no longer involved in the minutiae of management,” said Matt.

Farm + Ferment’s other business interests include Bacco Ristorante in Southfield, Cloverleaf Fine Wine & Craft Beer in Royal Oak, and the Bigalora chain of gourmet pizza restaurants. The principals include Mike Collins and Mike Messink, who will assume oversight over the Arbor breweries’ day-to-day operations.

“Adding Arbor to our umbrella is a natural progression for us,” said Collins. “It’s vertical integration with our other holdings, with an eye toward providing our customers with the highest quality, whether it’s food, whether it’s wine, or whether it’s beer. Arbor is a great fit for that.”

And what can customers expect to see at Arbor breweries under this new arrangement?

“Arbor is a long-running, successful brand, and we’re not coming in to make changes on day one,” said Messink. “But we do have plans to expand the brewery in Ypsilanti in the first year, which will add capacity and give us the ability to brew some new beers we haven’t done before. We’re looking forward to bringing some new, exciting things to market, utilizing our own Michigan hops. But by and large, the direction of the Arbor brand will continue as it has for the past 20 years.”

Other Arbor locations will open throughout Michigan in the near to medium-term future, said Collins. “Our first priority is to complete the brewery expansion in Ypsilanti, but we see continuing to add locations across the state,” he said.

The Greffs opened the Arbor Brewing Brewpub in July 1995, marking the first brewery to operate in Ann Arbor since the 1940s (beating out nearby Grizzly Peak by a month). Eleven years later, they added the Corner Brewery (since renamed) in Ypsilanti to serve as a production facility for their distributed kegged and bottled beers, including pub favorites Sacred Cow IPA and Michael Faricy’s Irish Stout. In 2012, they partnered with University of Michigan alumnus Gaurav Sikka to open Arbor Brewing India in his hometown of Bangalore. For the brewpub’s 20th anniversary, the Greffs announced a $200,000 renovation, resulting in an expanded bar and kitchen space, along with a new menu.

The deal – which involves a term of 10 years – does not encompass the operations of Arbor Brew India, but leaves the door open to share in other international expansion. “We’ve had interest from other countries,” said Matt.

The deal also sees Arbor’s original investors paid back in full, which has been the Greffs’ overriding goal over the years. “That was one of the things that helped us make this decision – that it was a way we could be sure everybody was going to get paid back. The vast majority of them are ecstatic.”

The Greffs’ pioneering influence extends well beyond Washtenaw County. They were founding members of the Michigan Brewers Guild, which began in 1997 and now includes 223 of the state’s breweries. They were among the first – if not the first – Michigan brewery to brew Belgian-style barrel aged sour beers in 2002, well before breweries like Dexter’s Jolly Pumpkin popularized the then-unusual (to American palates) beer style. And in 2012, they became Michigan’s first solar-power brewery.