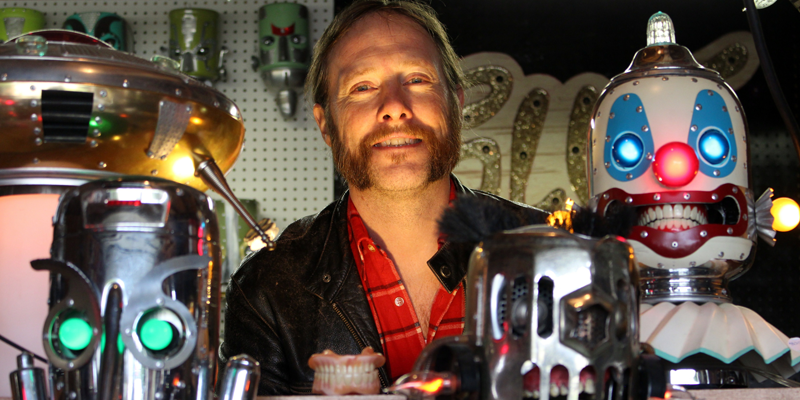 Art is subjective. One person might see junk, while another is mesmerized. Local artist Cre Fuller sees potential in discarded items and has the talent and imagination to turn “junk” into unique pieces of art.

Nuts and Bolts and Glass Eyes

Fuller has been creating robots out of discarded items for several years and his workshop contains a table filled with his creations, everything from sinister-looking clowns to insect-like robots. The back wall of the space supports a huge pegboard, filled with robot heads of different designs and colors–silver, green, or medical-looking movie droids. Shelves and boxes contain all sorts of old coffee pots, juicers, thermos bottles and other metal items waiting to be fused into a fantastic robot.

Some creations function as lamps. One looks like a cyborg—half of its face built with all metal parts, and the other half of its face appears human—a perfect example of how Fuller repurposes old items. “This one has one of my Aunt Sally’s glass eyes in it,” said Fuller, as he holds a cyborg figure with care and admiration.

Every artist has an inner drive to create. “I’m a tinkerer by nature,” said Fuller. “I loved all the 1950s versions of what robots looked like. They intrigued me. I found the robots to be comical and romantic.” Fuller is also a big fan of old monster movies. “They’re very iconic and inspire me.” When it comes to the initial design of a robot, Fuller starts with the eyes. “That’s where the personality comes from.”

Oddities round out his creative inspirations. Conversation pieces include loads of art, retro lamps, a vintage anatomy torso model, a monkey skull and shark jaws–all of which decorate his work space. “I wait until I have a great supply of special parts to make a gallery piece,” said Fuller. 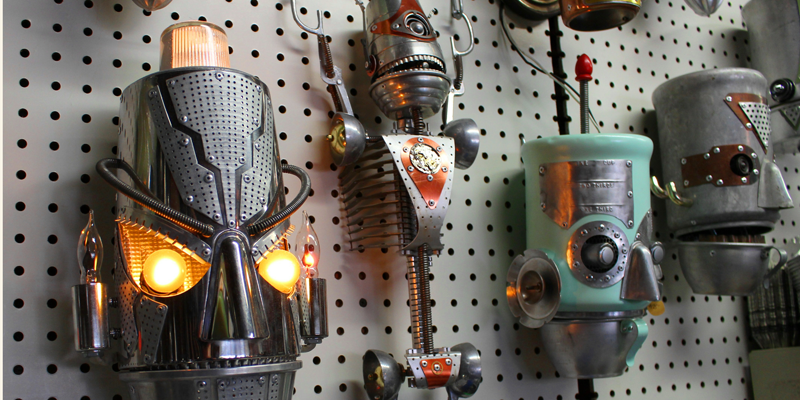 Beginnings as an artist

As a self-taught artist, Fuller began his career years ago, painting and making jewelry before creating electric lamps, an experience that adds to his robot-building skills; many of Fuller’s robots light up to function as sci-fi ambient lighting.

When Fuller first began making robots, he gathered the pieces used to create, but as his reputation grew, people began bringing him parts of machines and metal objects. “I have fun making them, no matter what they look like,” said Fuller as he stands next to a robot clown with a mouth full of dentures.

Fuller showcases his robots at DIYpsi, which he founded with Sherri Green and Marcy Davy; a handmade art fair that takes place twice a year in Ypsilanti’s business district. The popular event has been growing since its start six years ago. “We started with about 30 artists after taking over The Shadow art fair. Now we’re up to about 85 artists, groups, and food vendors,” said Fuller. “The community really supports it. This gives us better artists, with more people checking it out, and it snowballs every year.”

In addition to DIYpsi, Fuller participates in gallery shows. The Ann Arbor Art Center has showcased his robots locally, and other galleries in Michigan, including the Round Lake Gallery in Charlevoix, have displayed his work. “I feel blessed, because my art is very well-received,” said Fuller. He shows that appreciation by teaching at the FLY Children’s Art Center in Ypsilanti, in addition to various locations throughout southeast Michigan. “It’s fun and rewarding to teach,” said Fuller. “I plan to do more of it.”

“The art around Ypsilanti is amazing. There are so many talented people here. We benefit from Ann Arbor and all its energy and resources,” he said.

Fuller’s artwork will be on display at the
Ypsi Alehouse (124 Pearl St., Ypsilanti)
on Friday, May 6.
For more about Fuller, visit tinangrymen.com.