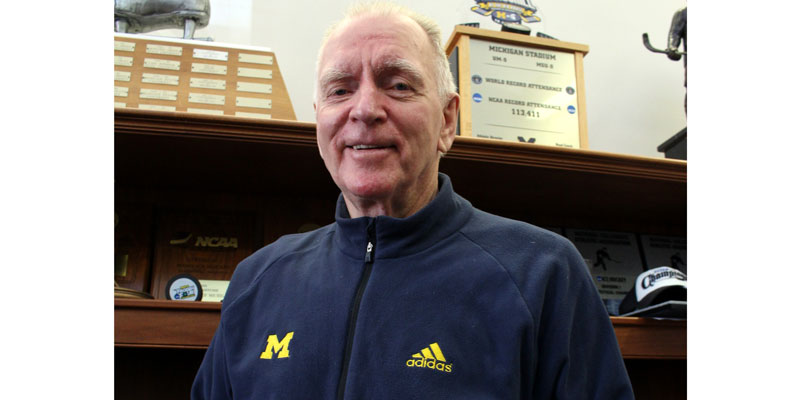 Becoming a legend and Hall of Famer isn’t something that happens overnight. It takes years of dedication and perseverance to reach the pinnacle of greatness in any chosen field. Now in his 32nd year as Head Hockey Coach at the University of Michigan (currently the longest tenure for any Division 1 Hockey program) and with two National Championships under his belt, Red Berenson spoke with Current about his passion for hockey, the University of Michigan, and his life in Ann Arbor.

Not only has Berenson held the title of Hockey Coach for 32 years, he played hockey for UM and graduated from the Business School as well. “It (graduating from UM) helped change and form my life before my 18-year career in the NHL.” At the age of 44-years-old, Berenson became the head coach at Michigan. “I never anticipated being the coach,” said Berenson. “I couldn’t have asked for a better place to be. I’m very lucky.”

If ever there was a “Michigan Man,” Berenson is that man. As we talked, he showed me one of his favorite books written by Bo Schembechler and John U. Bacon: Bo’s Lasting Lessons: The Legendary Coach Teaches Timeless Fundamentals of Leadership. With a look of admiration in his eyes, Berenson simply said about Schembechler, “He was a great man.”

“When hockey season came, it was my time. Hockey gave me confidence and helped shape me,” said Berenson. “I can relate to young players and how the confidence they get from hockey helps shape their lives.”

Hockey is a tough sport. Berenson played in the NHL for 18 years in addition to his college time at UM. He still looks like he could get on the ice and score goals. How does Berenson stay in such great shape? “Being a hockey player made me care about my body,” he said. “It became a habit. When I became a coach, I’d get out of bed in the morning, and nothing hurt!”

His philosophy on staying healthy is very simple: “Fitness should be a part of your life. Stay on top of it!”

How Ann Arbor and student athletes have changed over the past 32 years?

On Ann Arbor: “It’s bigger and better. Look at all the places and restaurants you can visit. You can still ride your bike around most places.” With all the success Berenson has built at Michigan, he’s seen a big difference in fan attendance at Yost Arena; “When I was playing at Michigan, you never saw the stadium full. Look at it now!”

When it comes to student athletes, Berenson has seen some changes. “Some of the kids today are parented differently and have a sense of entitlement, but most kids bring it every day regardless.” Humility is something that exudes from Berenson, and that humility extends to his players. “After winning the National Championship in 1996, I got a call from a professor who had one of my players in his class. We won the Championship on Saturday, and he came to class on Monday like it was any other day. The professor was surprised that the player came to class and was so inconspicuous. Being grounded in academics is very important.”

From restaurants to a glimpse of  humble beginnings from the late 1950s: “I enjoy eating at the Gandy Dancer,” said Berenson. “When I was a student at Michigan, I use to work there when it was the train station. I unloaded the trains. Ann Arbor is a great place to go out.”

Like many other longtime Ann Arborites, Knights Restaurant is a favorite spot. He also mentioned Cottage Inn Pizza as a favorite.

Berenson also likes to kayak along the Huron River and enjoys the outdoors.  “The parks and all the recreation give you a feel-good vibe.” As a former player for the Detroit Red Wings, Berenson also likes the fact that Detroit (and Joe Louis Arena) is so accessible from Ann Arbor. Originally from Regina, Saskatchewan, I asked Berenson if he’d ever move back when he retires. His answer was very quick; “Ann Arbor is home. I’m staying here.”

When prompted to offer advice to the people of Ann Arbor, Berenson replied, “Be part of the citizenship here. Find people who care about the same things you do. Do the right thing.” Taking the time to help the environment or your fellow citizen is something that Berenson takes to heart. “I’ll pull my car over on the road, get out, and pick up a can.”

Coach Berenson is one of four college hockey coaches with more than 800 wins in a career.  With all the energy, passion, and wisdom Berenson has, he certainly could make a run at being the All-Time winningest hockey coach if he wanted, but says he’ll, “Do what’s best for the program.”

Keys to Success in Life

Berenson talked about his father, who was a fireman: “The greatest advice my father gave me was, do it right if you’re going to do it.”