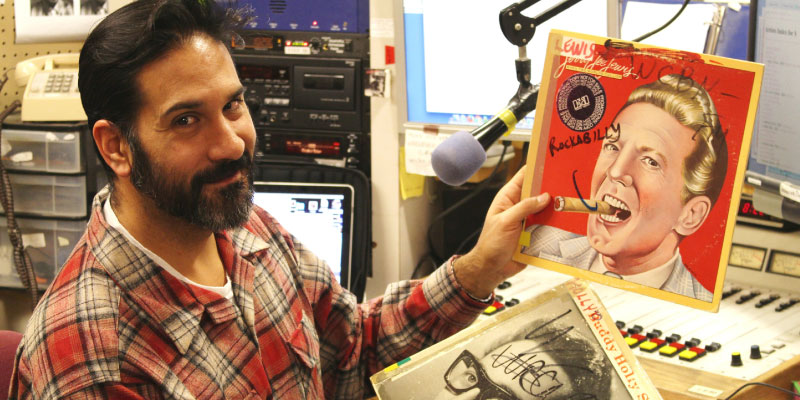 “I’ve always been a passionate music fan,” exclaimed DJ Del Villarreal, AKA the Aztec Werewolf. As a graduate of the University of Michigan, Villarreal has made Ann Arbor his home for over 20 years. During that time, Villarreal has been spinning rockabilly records at WCBN’s radio station and lending his passion and expertise to a music genre that is pure Americana. Rockabilly music is a blend of country, blues, and rock-n-roll. Music legends like Elvis and Johnny Cash helped to launch this iconic musical style in the 1950s.

The Aztec Werewolf’s musical journey began many howling moons ago. Villarreal cites legendary DJs like Wolfman Jack and Alan Freed as influences. “I loved the medium of radio, and I’ve always been a fan of Elvis and classic horror movies,” said Villarreal. When Villarreal first arrived in Ann Arbor, he spent a lot of time collecting records and CDs at Tower Records and Skool Kids Records (classic music stores that are gone but not forgotten).

The music scene at the time was exploding with new angst thanks to bands like Nirvana, who Villarreal had the opportunity to see when they played at the Blind Pig. “I saw a lot of bands that played in Ann Arbor,” said Villarreal. “k.d. Lang, Goober and the Peas, Elvis Hitler.” While attending Michigan, he would often hear tunes from The Cramps and Mojo Nixon being played at Dave’s Comics, where he was working at the time. With all that musical energy happening, Villarreal began to listen to the radio shows on UM’s WCBN-FM Radio (88.3 FM). There was a DJ by the name of Craig Maki who hosted “The Go-Kat-Go” rockabilly show. Villarreal was a fan of the show, and began filling in as a guest DJ, eventually taking the reins in the early 90s.

Rockabilly music: What it was and where it’s going

The imagery of rockabilly music conjures up visions of slicked back hair and leather jackets for the fellas, poodle skirts and victory rolls for the gals, cool hot rods and cars with fins, and a simpler time in America when things didn’t seem as complicated. The Stray Cats were a household name in the 1980s, and Brian Setzer (the vocalist and guitarist for The Stray Cats) had a big comeback with his solo project in the 90s that fueled the Swing Dance movement. “I was a fan of Happy Days, and the movies Grease and Cry Baby,” said Villarreal.

I asked Villarreal how the rockabilly scene has changed over the past 20 years.

“It’s bigger and more diverse than it was. The music has evolved from being very 1950s rock-n-roll to creating sub genres like “Psychobilly” (which is a mix of punk rock and rockabilly) and “Horrorbilly” (which is like Psychobilly with the band members often dressing up in a gothic or vampire look while singing horror movie inspired lyrics).” 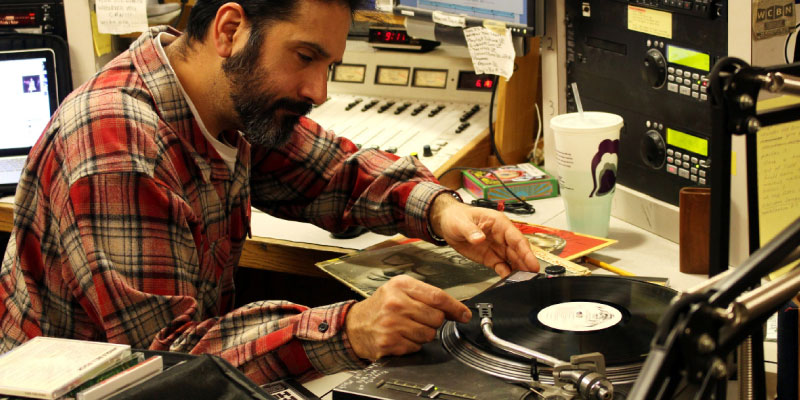 Villarreal plays a good mix of old and new on both of his radio shows, but mentioned that his “Motorbilly Radio” show is straight up rockabilly compared to the eclectic mix that is his “Go-Kat Go” show. “WCBN is loose and quirky,” said Villarreal. “It’s got a true Ann Arbor flavor that is weird and oddball.” The evolution of the radio DJ to the internet DJ is a positive as far as he is concerned.

With regards to his Motorbilly Radio show, “I have a good internet presence and I’m able to interact with my fans through social media,” said Villarreal. Another positive for listeners is promoting new bands (something he loves to do) and, “keeping alive the great classic rockabilly artists.” When it comes to his personal preference, Villarreal describes himself as a “purist” whose favorite acts include Elvis, Carl Perkins, Gene Vincent, Eddie Cochran, and Buddy Holly.

Del also travels around the country and overseas as a rockabilly MC and DJ. Two of the bigger festivals he participates in every year are “Viva Las Vegas” and the “Rockabilly Rave” in England. His travels have allowed him to meet top rockabilly performers including The Reverend Horton Heat and Big Sandy.

Ann Arbor is a great city to see live music, and rockabilly is no exception. Great bands like The Paladins and Junior Brown have played shows at The Ark and the Blind Pig. Artists like George Bedard and the Kingpins have been knocking out tunes for many years in Ann Arbor. Villarreal is very enthusiastic about keeping the genre viable by giving exposure to local Michigan rockabilly musicians like Cash O’ Riley, The Hi-Views, and Cat Canyon because as he says,“They keep the music alive.”

Villarreal travels the world and brings everyone the best rockabilly music there is but he’s a true Ann Arborite, through and through. “I’m very happy to live here,” said Villarreal. “There’s no place I’d rather be.”

You can listen to Del Villarreal’s “Go-Kat-Go” rockabilly radio show on WCBN-FM 88.3 on Tuesday nights from 8-10pm, and his “Motorbilly Radio” show at motorbilly.com on Wednesday evenings from 8-11pm