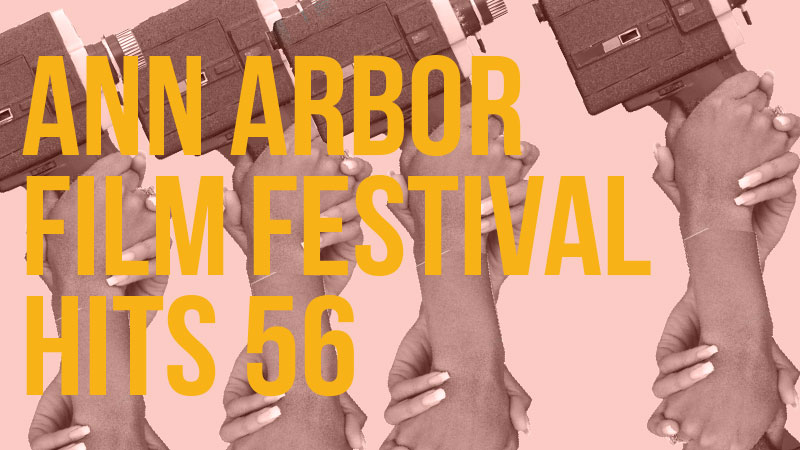 The Ann Arbor Film Festival was founded in 1963, making it the oldest avant-garde and experimental film festival in North America. Chris Peters is one of the crew of volunteers who helps whittle down 3000 submissions from more than 65 countries to a list of fewer than accepted 200 films.

This is Peters’ second year screening films for the AAFF, although he attended the festival for years before taking on that role. His artistic background is in music, not film – he was in a band, Getaway Cruiser, that had a deal with Sony in the 90’s. “I’m no expert on the history of cinema, so that’s slightly intimidating walking into this,” he says. “But then I recognize that I’m just another human being experiencing the world around me and experiencing these films. I think that [the directors] value that kind of person in the mix, without the historical context.”

Submissions typically begin to flood in on July 1st, but this year, the process for screeners like Peters began in mid-September. There was a slight delay getting the new online review platform (a collaboration with local tech company InfoReady, which designs software to help universities evaluate grants) up and running, but according to Leslie Raymond, the Executive Director of the Festival, the new platform has made the selection process more efficient. “On the screener side, it’s a lot simpler, and for the administrators, it’s easier to manage.”

The 50 volunteer screeners go through an orientation where they commit to an ethical selection process, and also learn the Film Festival’s selection criteria. For Peters, that means looking past his own personal taste. “Sometimes you know right away that something is not right for the festival,” he explains, “ because the AAFF is an experimental festival. If I’m watching something I could easily see on PBS or Vice news – and sometimes those pieces are really great, conventional documentaries – I have to set them aside.”

In the new system, all the films are on a centralized website, next to a short description of the film and an evaluation form. Each film is ranked on a scale of 1-10 in different categories, with space for the screeners to explain their evaluation. That blank space, for Peters, is the hardest part of the process. “When you’re watching experimental film, you’re often stepping into more of a dreamlike world than, say, a straight narrative world, so (when I) pivot over and (am asked to) write coherent sentences that get at how I feel….words fall short. This sort of creativity (in the submitted films) is something that transcends language.”

Peters says this year he watched 4 to 5 batches of 20 films, standard for a volunteer screener. A few of the submissions are over an hour, but most are far shorter. The directors of the Festival provide suggested deadlines to complete the viewing but, Chris explains, if a volunteer has trouble meeting the deadlines, the Festival administrators tend to be flexible. Screening these film submissions is not something for those who might consider it a chore. “You want people who want to be doing it. I blew a few deadlines this year and didn’t get thrown in jail for it,” he says.

When Leslie Raymond first got involved with the film festival in the nineties, there was no need for levels of screening; everyone watched each film together, in the same room, and discussed them immediately. It took every evening over the course of six weeks – and that was when the festival was only open to 16mm films. When it opened up to digital submissions in the early 2000s, the number of submissions caused that process to become unmanageable. Now, films have to survive four screening levels in order to get into the festival.

At the first level, two volunteer screeners have the option of recommending a film; if either screener recommends it, it moves forward in the process. Raymond sends a list of films declined by the screeners to an advisory board made up of film experts; if any of them recognize any standouts among the rejected submissions, these experts can override the declination and keep the submission in contention to be screened during the Festival.

On the second and third levels, volunteers with expertise on cinematic history evaluate the film. The submissions are then passed to the Festival directors, Raymond and Katie McGowan, who make the final decisions, based on input from the process, on what makes it into the Festival.

Some of the intimacy of the old process is retained through regular “salon” viewings for staff and screeners, where they watch and discuss some of the submissions together. Raymond says of the salons, “The ability to be in the same space, and to have that dialogue, is incredibly valuable.”

Peters enjoys the salons because they give him a chance to hear how others respond to the work. The hardest part of the process is articulating what he likes or doesn’t like about each film, and that each person is going to see something different. “I’m very aware that I can watch a film on a Tuesday and think it’s amazing,” he says, “and then watch it on a Thursday and think that it sucks. That’s just the way the brain works.”

Despite these inherent biases, Peters feels the selection process ultimately does the job of maintaining the festival’s excellence. He does his best to standardize, and keep consistent, his experience as he watches the films in chunks of an hour or two, on his big TV – never his phone or laptop – curled up under a big maroon comforter. “How can you do justice for somebody’s creative work?” he says. “I try not to watch too many films at once. If I find myself losing focus, I stop the film and come back to it another day.”

In terms of the kind of work he evaluates, Peters recalls screening, “Socrates of Kamchatka,” a Russian documentary told partially through the inner thoughts of a horse. “The horse is narrating certain portions of this film,” he explains, “which might sound corny, but it worked. The horse is kind of the truth-teller, seeing the world from outside of the human way of thinking.” It might seem like an unconventional move for a documentary, but Peters says, that that kind of experimentation is what makes the AAFF special, saying “I like when the genre is blurred. When you’re blurring category and functioning beyond categories. That’s where the good stuff really happens.”

A chance for growth

The most important part of the experience for Peters is that it’s a way to expand his intellectual world. “I do this so I can be exposed to ideas that spoonfed American culture isn’t going to give me,” he says. He also volunteers to drive the filmmakers from the airport to Ann Arbor for the Festival, which is what he enjoys most. “I force them to write out the last 3 films or the last 3 books that they loved. That’s what I see as the exchange.”

Peters says getting involved as a screener is less intimidating than first-timers might expect. As a volunteer, you don’t need any special expertise. “You just gotta be curious,” he says. “If you want to see storytelling from all over the world, then I would recommend you get in the mix and take it on. I see amazing stories. I’m very grateful for that – I get to see all this stuff I would never see.”

The 56th Ann Arbor Film Festival will run from Tuesday, March 20 through Sunday, March 25, based at The Michigan Theater (603 E Liberty St.).