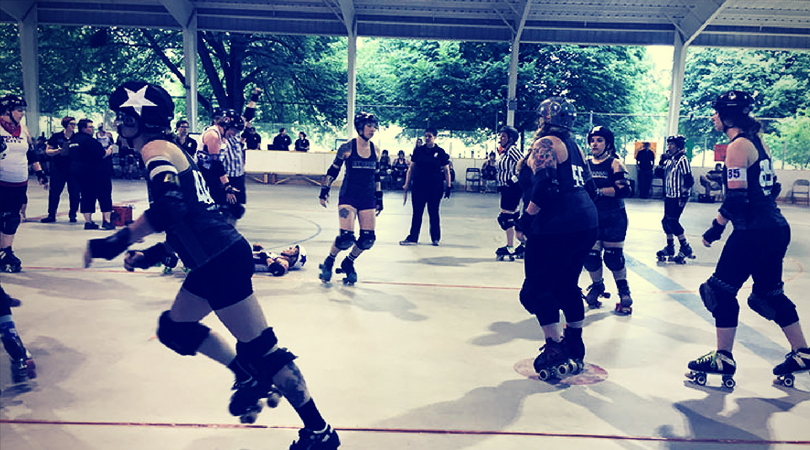 It’s chilly for June, but the bleachers at Buhr Park are packed for the Ann Arbor Derby Dimes’ first home game of the season. The announcer’s play-by-play is lost behind the referee whistles and the scrape of the skates as Whisk’ya Sours, #40, flies around the track. There is a white star on her helmet, setting her apart from her team’s blockers. Sours is the jammer for the Ypsilanti Vigilantes, one of the three teams that make up Ann Arbor’s roller derby league.

The jammer is like a ball that hits back, according to Amelia Spareparts, league president. The jammer’s job is to earn points by racing around the track as many times as they can; the job of the opposing team’s blockers is to stop them. Sours strikes the cement, elbows-first, but scrambles to her feet and shoulders an opposing blocker to the ground. Every player is wearing pads on their knees and elbows, and some are wearing mouth guards and safety glasses. Taking a hit looks like as much a part of the sport as skating is, and the players bounce back into play moments after hitting the ground. “Roller derby is the only place where I see people lay each other out, and then high-five,” Spareparts says.

Michelle O’Bombya rode horses since she was a kid, but had never played a team sport before discovering roller derby. She was recruited at a gas station in 2010—a girl was filling up next to her when a skate fell out of her car, sparking a conversation about the league, and an invitation to practice. O’Bombya was hooked.

Spareparts’ entry was not as smooth. She failed the skill test at the end of her first training wave, and had to repeat the 18-week boot camp. She was tempted to quit then, and many times since, especially as she struggles with chronic illness. The sense of community is what kept her invested. “Roller derby is, culturally, an experience I had never had anywhere else. The ongoing theme is just to accept your body, and nowhere else in my adult life, or even in my childhood, have I seen a group of women just want each other to accept themselves so passionately.”

Roller derby has also built up a reputation for being “super queer,” according to O’Bombya, a community where players of any sexual orientation or gender identity can feel comfortable. “It’s taken off almost faster than the rest of the world can catch up, because this is a place where everyone can just exist comfortably, and at the same time support each other.”

Last year, a series of injuries convinced O’Bombya that it was time to stop competing, and she now runs the new skater program. She likes the training aspect of it, but more than anything, she loves to welcome newcomers into the fold. “When I think of roller derby, I think of the community. The community is very much what makes it whole and keeps people in.”

Spareparts agrees. “It’s a lifestyle. You don’t get other hobbies—this is what you do. But if you’re ever looking for 80 new best friends, this is where you’ll find them.”