Person of Interest: Q & A With Akili Jackson 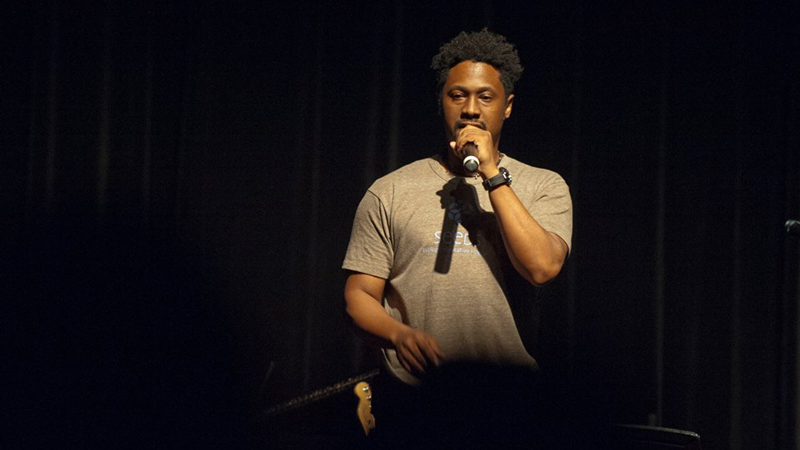 Akili Jackson has worked for over fifteen years as a youth development worker, specializing in programs that inspire positive character development in youth. Akili is a founding member of Radiant City Arts Collective in Toledo, and worked for seven years as founder and Chief Development and Learning Officer for Community Records L3C. Akili is a former member of the Board of Directors at New Beginnings Academy (NBA), and is part of the Akoma Culture School of Ypsilanti. He is currently an Executive Coordinator for the Resource Development Institute (RDI) of Maryland, which focuses on capacity building and leadership development for urban communities throughout the United States and Africa.

How did you get started in poetry?

I left school, initially, because I didn’t think the sports brotherhood, or camaraderie, was sustainable enough for me. It didn’t feed my cultural sensitivities. It didn’t feed my ability to connect with other human beings. It kind of marginalized me, in a way… I was not in it for the victories or the wins. I was in it to connect and to self-express. So, when I met William James at Washtenaw Community College, he reignited my love for literature, because his literary style was engaging. It was asking you the large questions… Within that, a lot of stuff came out, and after a few lectures, he started just letting me teach the class. He was so supportive. And from that, I wrote tons of poems. From those poems, I was discovering that I was connecting to people in a stronger way than I thought.

How did you move from poetry into doing community work?

Eventually, you write enough that you have to ask: who are you, and what are you doing? I wanted to put that energy into people. Actual actions, forming relationships, you know: verbs. That became my way of being. Through [Pinelake Village Cooperative], we started having a poetry night in that community, and we built a sense of pride, dignity, and camaraderie with the youth there for four or five years… It wasn’t about the resources we were bringing in. We were communicating with people and letting them know that they were the resource.

What made Community Records different from other labels?

What [Jesse Morgan, founder of Community Records L3C] and I really worked on in terms of Community Records was we understood that it’s not about getting an album out. It’s really focusing on the process of attaining one’s voice, and that’s where I specialized. Community Records wasn’t just about being a record company for the community — we are here to record the life experiences of a community, the trials and tribulations, the hopes, dreams, and aspirations of our community.

What do you think is the importance of music and poetry in the broader world?

Creativity is not this off-the-cuff side thing that we just do in our leisure time. It’s actually in the base of not just what we do, but what we need to evolve our society. In a lot of the work I’ve been doing recently, I’m looking for a way for young people to engage with actual creative careers and jobs, and using creative technology… leveraging that in a way to create actual jobs and incomes. People are using these things to promote social engineering on us anyway, so I want to engage youth and marginalized people in these sciences, so that they can start to empower themselves and use this data to talk about how to solve their problems, and… find more connections, create more networks that are healthy, and not just utilize them for consumption.

Where do you see your artistic journey taking you in the next five years?

One of the things that I aspire to create in the future is a performing arts and science academy for Ypsilanti… I’ll still be working with organizations like Ozone House, and just creating more programs to really engage youth and to boost them up on different levels. We have to understand that it’s not just the school systems that have this job of developing youth. We all have that job.