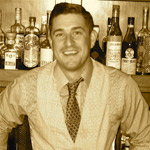 September is synonymous with a bountiful harvest, and with that usually comes a large feast.  Coincidentally, some of my favorite after dinner drinks fit into this kind of occasion quite nicely. After a large harvest dinner, nothing satisfies quite like the subtle essences of an eau de vie or the robust flavors of an Amaro.

Eau De Vie (French for “Water of Life”) or fruit brandy is usually a clear un-aged spirit made from the distillation of fermented whole fruits or juice. Popular throughout the world, these are perfect for an after-dinner tipple. Many say that the high alcohol content of these spirits will aid in the digestion of a heavy meal (hence the French term for after dinner drinks: “digestif”).  Aside from that, the delicately captured fruit flavors make for a real celebration of the season since most are produced between the peak and end of growing time. Popular examples include Grappa (grape pomace) and Slivovitz (eastern European plum brandy) as well as pear, cherry, and apple (often aged a bit).
Amaro, the Italian word for bitter, is often consumed before a meal as an aperitif to open the palate, but many are reputed to work wonderfully after a meal as well. Usually based in eau de vie (mostly grappa) or neutral grain spirits, there seems to be an Amaro for every region of Italy. These highly spiced and herbal preparations of roots, citrus peels, and plants are categorized as liqueurs. This is because they contain added sugar, but don’t be fooled, as the sweetness can often be a moot point. The most aggressively bitter offender is Fernet Branca from Milan. While some are more approachable, it should be noted that the “roots” (if you will) of Amaro lie in the world of medicine. These medicinal properties lend to Amaro’s folk reputation of being able to aid in digestion, cure an upset stomach, or even reduce a fever! I find the bitter aspect of these aromatic wonders to be a side note. The true beauties are subtle, unique and the perfect exclamation point to a great meal.