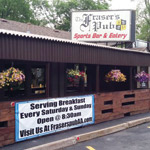 A celebration of five decades is traditionally honored with gold, but Ann Arbor is far too unique for such mundane conventionalities. In honor of Fraser’s Pub’s 50th anniversary, Arbor Brewing Company made “Fraser’s 50th,” an imperial rye brew especially for the A2 mainstay. “I thought it was a very endearing, wonderful thing,” says John Fraser, Fraser’s co-owner. “They thought the 50th was something very special, and it’s really incredible to have them make a beer.” Fraser’s has always been John’s stomping grounds — his father, grandfather and uncle founded the pub in 1962. Stop by and enjoy a taste before its gone, and congratulate Fraser and company on half a century of fun. $5.99 for a pint.