Washtenaw County residents can finally stop biting their nails in anticipation – the Top of The Park “Movies by Moonlight” schedule has been released.

Now in its 34th year, the Ann Arbor Summer Festival, a collective celebration of performing arts and community, is as highly anticipated as ever – for good reason. Long-running as every Ann Arbor area families’ excuse to stay out late on a weekday summer night, the festival has held no punches in the 2017 film lineup.

And while the remainder of the ticketed event lineup won’t be announced until early April, the movie schedule is one worth getting excited for. 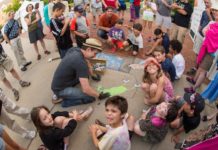