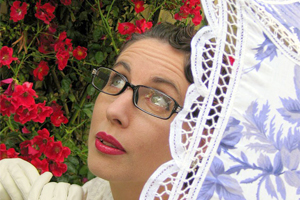 The 2012 World Steam Expo, held on Memorial Day Weekend (May 25—28), at the Hyatt Regency Dearborn, in the Fairlane Town Center, is one of the area’s largest and newest conventions.  If you’ve ever been curious about the phenomenon known as “steampunk”, here is where you can get your steam, corset, and/or goggles on.  If you’ve been oblivious to the genre, a short definition is:  a setting which uses steam power to run its gadgets, usually set in an alternate Victorian-influenced era.

More commonly, particularly in the convention-going set, is an aesthetic of costume and do-it-yourself that evokes a “world-that-never-was-but-should-have-been”. This year, guests include several authors, including Gail Carriger of the very fun “Parasol Protectorate” series, and a lineup of bands. Premiere among them is the Seattle-based Abney Park, headed by vocalist Captain Robert Brown.

Convention programming is not set,  but if last year’s con was any indication, there will be plenty of it, for any/every taste.