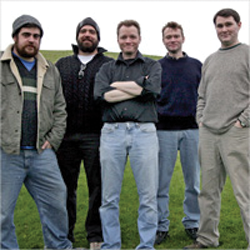 On Friday, June 28, Conor O’Neill’s and the Ark team up to present a very special dinner package. For $25, you get reserved seating and one entrée from the Irish Fayre menu at Conor O’Neill’s and reserved seating at the Ark for the very Irish Makem and Spain Brothers. Long-time fans of Irish music will know of Tommy Makem, who, with the Clancy Brothers and as a solo act, revitalized the Irish music scene as the “godfather of Irish music”.  His three sons, Shane, Conor and Rory, have continued his legacy into another generation, teamed up with the two Spain brothers, Liam and Mickey. Playing a wide variety of instruments (including bodhran, banjo, bouzouki, bass, mandolin, and guitars), each of the band members also sings, which makes their sound very full and rich, rivaling the  Brothers Four and the Kingston Trio, albeit with a decidedly Irish bent. Their repertoire comes from the Makem family tradition of song, as their grandmother, Sarah Makem, was renowned as a source of traditional Irish music by ethnomusicologists, and their grandfather, Peter, played fiddle. They are guaranteed to give an evening of very enjoyable music. If you don’t want to enjoy the full package, tickets to the Ark only are $15 and the show starts at 8pm. Buy tickets in advance at Conor O’Neill’s or the Ark

In support of their new album, “Fall of Romance”, which hit stores in late May, the Canadian group Imaginary Cities performs on Tuesday, June 11, at 8pm at the Ark. Tickets are an astounding $10. Formed when multi-instrumentalist Rusty Matyas heard Marti Sarbit singing Motown at the Cavern in Winnipeg and approached her between sets, the band is now comprised of three other instrumentalists and is fast becoming one of the premiere folk bands in Canada.  Their sound showcases Sarbit’s extraordinary voice, with R&B influences as well as a more contemporary pop sensibility. While I’m not usually interested in this flavor of folk, Sarbit’s voice and the instrumentation have made me a fan.

The Black Lillies showcases the alt-country sound of frontman Cruz Contreras. Formed after his previous band had dissolved in a messy debacle, this band focusses on heartbreak, travelling the back roads, and the hope of forgiveness and it’s just brilliant. Based in Knoxville, Tennessee, the band (harmony vocalist Trisha Gene Brady, multi-instrumentalist Tom Pryor, bass player Robert Richards and drummer Jamie Cook and vocalist Contreras) travels many miles every year,  showcasing what an independent band can do. They’ve taken mainstream country music by storm, being invited to play at the “Grand Ole Opry” a dozen times, had top-requested videos on Country Music Television (with good reason – check out the video for “Same Mistakes” on the Ark’s website or on YouTube).  They appear on Saturday, June 15, at 8pm at the Ark. Tickets are $15.