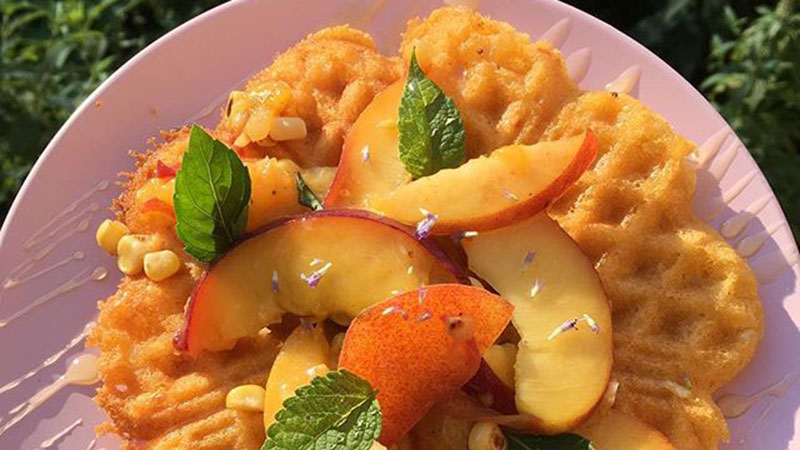 Ollie Food + Spirits, the name of Mark and Danielle Teachout’s restaurant in Ypsi’s Depot Town, came from an unexpected past. When Mark was young, his father explained that he had a name selected for Mark before he was born, Burgess Oliver. Despite his father’s selection, his mother prevailed and he was given the moniker Mark, a popular name for many born in the 50s and 60s. Years later, when Mark reached adulthood, he had occasion to ask his father why he had planned to name him Burgess Oliver. That question lead his father to tell the story of a bar fight in his younger days as a rough-and-tumble oil rig wildcatter in Australia. Outnumbered during the melee, an individual had come to his rescue and, as Mark tells it, his father credited the good samaritan with “saving my life.” Mark’s father promised the savior that he would memorialize him by naming his first born child after him. As things go, that did not occur. But when it was time for Mark to name his restaurant, he thought, “What about Ollie?”

From Dishwasher to Restauranteur in two weeks

Teachout, fresh from the restaurant business in NYC, moved to Washtenaw County in pursuit of love with his now wife, Danielle. In need of work, Mark applied to work as a dishwasher at a restaurant which previously occupied Ollie’s location. While not enamored with the work, he enjoyed the paycheck and the opportunity that the business presented. It was 2010, and the owner of the restaurant, tired and uninspired, was frequently absent. After only two weeks on the job, Mark boldly arranged a conversation with the owner. He broached the subject of buying his equipment and taking over the space, and in January 2011, Cafe Ollie opened in that location.

After about half a dozen years in business, the Cafe was offering a number of different options — “too much and without clear direction” according to Mark — including dinners, lunches and other light meals, ice cream, a coffee shop, and pastries. He closed the place for a remodel and in April 2017, opened the doors, re-invented as Ollie and its adjoining neighbor Cream and Crumb.

Walking into the open interior of Ollie, light from the windows bathes the interior of dark woods and comfortable seating with a convivial Irish Pub sensibility. Now a cocktail bar with casual fine-dining, the operation’s commitment to local producers is evident as they utilize small distributors for virtually all their ingredients for the components of meals made in the restaurant’s from-scratch kitchen, including breads and baked goods. Though Ollie grows much of its own produce and herbs, Chef Travis Schuster supplements what the restaurant doesn’t grow in house from local purveyors with whom he has strong relationships from his prior experience at Arbor Brewing Company and Spencer.

The restaurant concentrates on weekend brunches and dinners but lunches have been becoming more popular.

Our server, Josiah was a knowledgeable guide, which was expected after he admitted that he is a cook at the restaurant on most nights and weekends.

We ordered a Spring Grain Salad, a delightful mixture of rye berries, toasted pistachios, dried cherries, scallions, and other goodies. The salad proved a great accompaniment to the grilled cheese and pesto sandwich, which arrived on hearty Tuscan bread, filled with more than adequate portions of garden pesto and aged white cheddar cheese. Hickory smoked bacon was an optional addition, which we heartily accepted, and the rich, smoky flavor was an unexpected delight.

The Harvest Salad included mixed greens and pickled onions, dried cherries along with root vegetables, all tastefully blanched, leaving them still crunchy but not aggressive. The salad came bathed in a Green Goddess dressing made in-house from coconut milk, soy sauce, sesame oil, tahini and herbs.

The bar has an ambitious selection of bourbons, scotches, and other spirits. As well, the wine list, while not extensive, has a representative sampling of vintages from both the United States and Europe.

The excitement and enthusiasm of the staff is palpable at Ollie, another reason why this location deserves a visit. A burgeoning staple in the Depot Town area of Ypsilanti, the restaurant is easily accessible with ample parking close by.

While we cannot say if the meal warrants fighting over in a bar, we can say that the food and service are spot on, and that’s not pulling any punches.