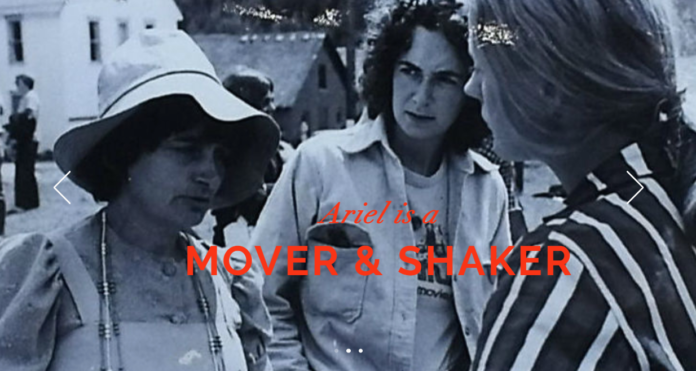 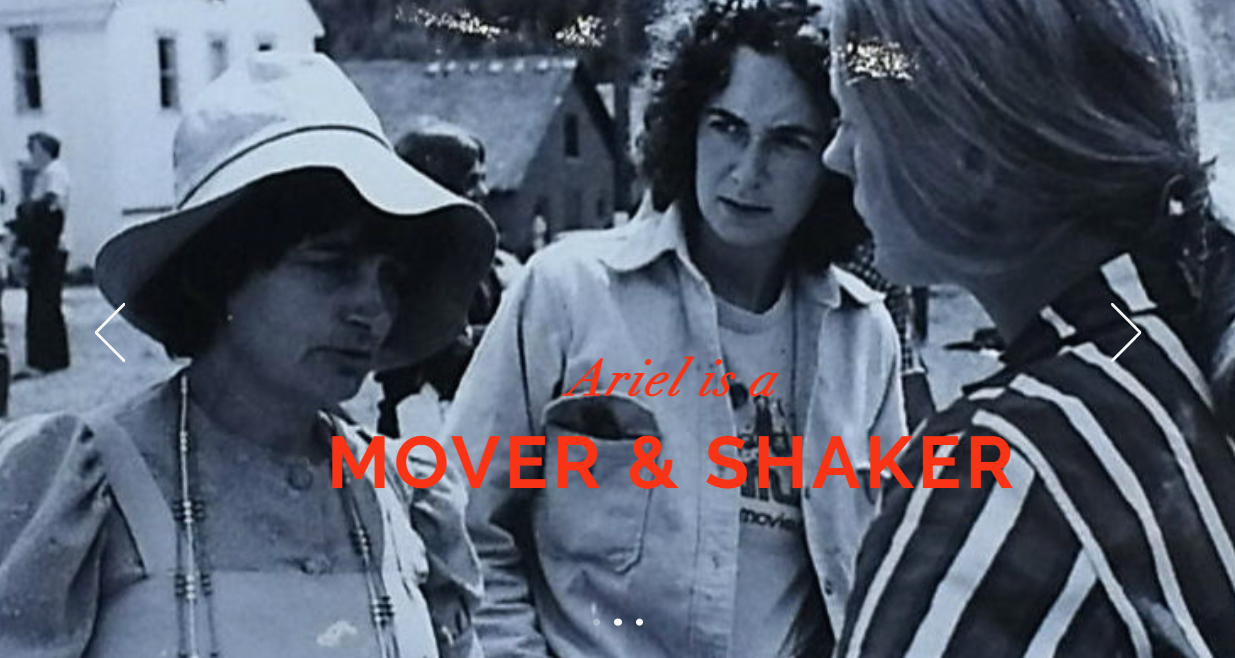 A conversation with Ariel Dougherty is both inspirational and enlightening. She has been at the apex of women’s films, both in terms of women as filmmakers and women’s stories as content, since the late 1960s.

Her interest in the genre piqued while taking a film course as a student at Sarah Lawrence College. She learned from her teacher, Wil Leach, who was a cohort of Brian DePalma (and for whom DePalma later named the protagonist in his film The Wedding Party), of the opportunities to convey ideas through film. Another class that Doughtery took in college, focused on teaching kids through art, led to her becoming a teacher, and also served as her entree into filmmaking.

Doherty worked at the Young Filmmakers Institute in New York City in the late 1960’s as an instructor, along with Sheila Paige (who would become a co-founder, along with Doughtery, of Women Make Movies).

Two of Paige and Dougherty’s early films were created with the Institute, as an offshoot of the women’s liberation movement. As teachers, the pair had access to the film editing equipment owned by the Institute and they rented production equipment to shoot two early films. The Women’s Happy Time Commune, a fictional comedy with an all woman cast and crew, which Dougherty describes as “a feminist Western, set in the 1850s” with an overlay of the 1970’s  women’s liberation movement.

The Ann Arbor Film Festival will also screen a short work of Doherty’s, Domestic Tranquility. Shot in 1972 and released in 1973, this 6-7 minute film was one of the first productions of Women Make Movies, an organization which supports the role of women in creating films.

The short film was shot in the Chelsea area of Manhattan, in a neighborhood whose residents had mixed socio-economic and racial backgrounds. Doherty recalls that, due to using women from the community as the subjects in the film, the producers provided daycare so that the children of the participants would be cared for. This was instrumental in teaching the participants in the Young Filmmakers Institute how to use the bowflex camera and how to collaborate on a project.

The third film of Dougherty’s that will be shown at the Festival is Sweet Bananas, a story based loosely on three women that Doherty knew and how the characters, from working class and high class backgrounds, are all able to get along. Paige also worked alongside Dougherty on that film.

Dougherty was influenced in her work by Andy Warhol, a now famous and then-trendy filmmaker. Although she did not work directly with Warhol, she adopted his style of non-scripted, non-acted works with subject matter that informed and educated an audience on what was going on at the time.

In Warhol’s, as well as in Dougherty’s, early films, the camera remains stationary and the action takes place around it, rather than what had been done in film up to that time, which was that the camera followed the action throughout the story

Dougherty has high praise for the New York State Council of the Arts which was, as she puts it, “very supportive of this type of activity.” The Council provided financial support for these early ventures into women’s filmmaking. Dougherty recalls that $9,000 was provided through the Council for the first year of operation of Women Make Movies, and that monetary investment resulted in five films being produced. Obviously, filmmaking has become much more expensive in the decades since.

Women Make Movies became a non-profit organization in 1972 and continued its efforts at both supporting the creation of film by women filmmakers as well as distributing those films. Dougherty recalls in the early 1970s speaking with a then operating distribution organization where she was told by the male management “women are not an audience.” That comment provided fodder for Dougherty’s determination to demonstrate how misinformed the executive, and much of the industry at that time was, and also led Dougherty and her cohorts in Women Make Movies to focus their efforts on distribution. By 1980, the organization was primarily a distribution entity.

Looking back on the filmmaking industry and the involvement of women, Dougherty talks about the 1970s as a time when filmmakers actually knew each other. “There were community screenings and as you became familiar with a person’s work, you also became familiar with their face. For women, the dynamic of stepping into film and telling stories with women in film really didn’t exist before 1970.” Dougherty recalls attending an international film festival where all the women from Women Make Movies were on the stage as a group.

This was a time when women’s involvement in film wasn’t being taught and wasn’t accessible, which Dougherty describes as “looking forward and backward at the same time,” a very dynamic experience.

In the 1970s women became artists as an avocation at two and a half times the rate that women joined any other occupation. This was when women’s culture blossomed and, in spite of the fact that women were still not making the money they should have as compared to their male counterparts, women began to enter the artistic community in large numbers. Dougherty remarks that in the 1970s the average male artist was earning $12,000 a year where the average female artist was earning $4,000 a year— an imbalance of income which, sadly, still exists today.

Acknowledging that there has been a huge change since she began 50 years ago with the founding of Women Make Movies, she is still disappointed that “we are stuck,” citing that as of 2017 only 2.75% of the productions being screened in movie theaters were attributable to women producers and directors.

“When we don’t see good positive female directed stories then it is very difficult to encourage women to get more involved,” Dougherty explains, adding that she is also disappointed that there is no film that has come out of Hollywood regarding the women’s movement, which is now 50 years old. “Yes, there are documentaries outlining how it has progressed but when you look at other social movements, like the Civil Rights movement, there has been quite a bit of content in film about that.”

The 60th annual Ann Arbor Film Festival will allow a look back, with Dougherty, about the last 50 years and the expansion of the role of women in filmmaking.  As a testament to Dougherty and Women Make Movies, today the organization is still operating and is the largest distributor of women’s films worldwide.