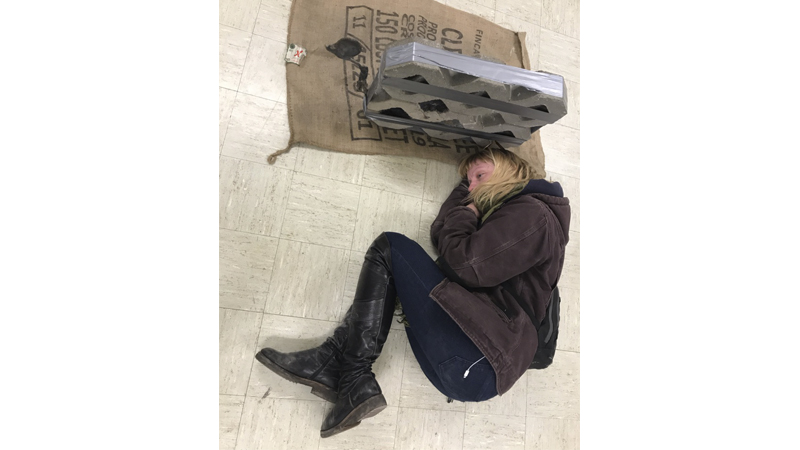 A bridge between EMU art students and established artists

Alexa Dietz understands the value of inspiration, and, with the coming relaunch of The Ypsilanti Arts Incubator, she’s building a channel for it to flow freely into a community with a wealth of creativity.

To grow and thrive

As a sculpture student at EMU in the mid-2000s, Dietz learned that an artist with a healthy functioning support system has the ability to grow and thrive. But unlike most of the transient students at her bustling “commuter” college, Dietz has actual roots in Ypsilanti that provide her with a unique perspective on the local arts scene. Today she’s using them to nourish fresh talent with the Ypsilanti Arts Incubator — an organization dedicated to helping young artists realize their potential.

Dietz has a talent for connecting people. It’s a skill that comes as naturally to her as breathing, and, sitting in Sidetracks, the tide of questions turns as quickly as the waiter appears at the table.  I’ve known Dietz for all of five minutes, but I watch as she selflessly speeds through her mental Rolodex to play career matchmaker, casually rattling off half-a-dozen potential contacts and collaborators. All artists should be so fortunate as to have such an ally.

Dietz was part of the artist collective that initially conceived the Ypsilanti Arts Incubator back in 2012. Renting a derelict Ypsi frat house in exchange for renovating the ballroom in the back, which had once housed a dance studio, the group adopted the moniker of the Ballroom Collective. In exchange for the renovations, the group was granted permission to stage one event in the spacious former studio each month.

When the frat house sold, the group found a new home in the Riverside Arts Center’s auxiliary space. Alas, by that point, the members of the collective were graduating from college and looking to launch their careers. One of those members, Elize Jekabson, went on to become co-owner of Ypsi Alloy Studios.

A vocal proponent for community activism, Dietz believes that by building a bridge between EMU art students and the non-collegiate Ypsilanti art scene, the cross-promotion will help both groups to grow in ways that might not be possible on their own.

On Friday, April 3 at 8pm, during the first First Friday in Ypsilanti of the season, Dietz will host a kick-off party for the revival of Ypsilanti Art Incubator at Ziggy’s (206 W. Michigan Ave.). The evening will exhibit Dietz’s  “99 solutions and a Richard ain’t one,” a series of sculptures originally conceived as a means of honoring 99 people in her life who nurtured growth and healing. The April exhibit will consist of 99 miniature versions of her 2013 piece “Monopoly,” with each honoree encouraged to show up and claim their sculpture. The evening will also offer Dank Frank Merchandise and feature DJs Aaron Batzdorfer, dannyboy, and Silas Green with special guest Black Alfalfa. The event is free, but a $5 donation is suggested.

We accomplish more when we work together, and with Dietz serving as a creative matchmaker, great things are sure to follow.