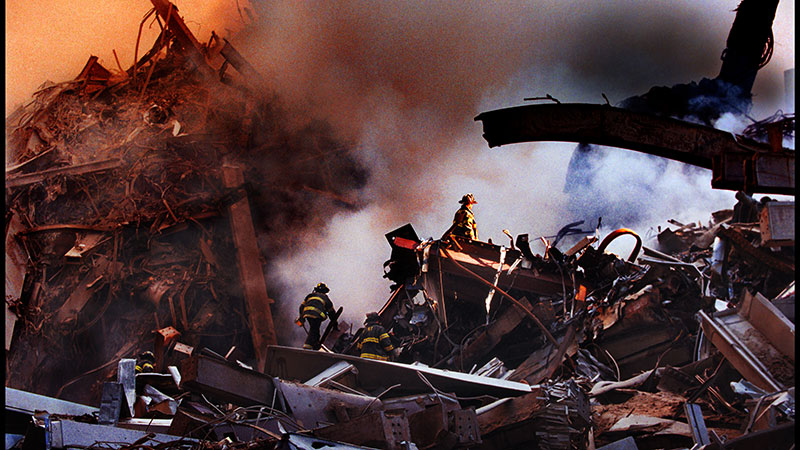 A plaque on the wall at the UM Art Museum explains that the exhibit, Aftermath: Landscapes of Devastation, “invites viewers to consider photography’s role in mediating the aftereffects of a crisis wrought on the land and its inhabitants.” Given the current moment’s saturating levels of exposure with upsetting news and images, natural crises might be difficult to contemplate. However, consider that visitors’ personal sense of information overload can make the exhibition more meaningful. Indeed, Aftermath asks viewers to look at photos unhurriedly, not as consumers or “users,” but as detectives, searching for clues about the photographer’s intent, and about the meaning of the disaster itself.

Aftermath, assembled in one room, covers both natural and man-made crises. The images are arranged according to the length of time elapsed between the occurrence of the event and the creation of the photograph, a conceit that makes it easier to formulate questions about the images. In many photos, only traces of the disaster remain, while in others the crisis unfolds in front of the camera, as in the iconic photo of a mushroom cloud forming over the first hydrogen-bomb explosion.

The photos vary widely in style, from straightforward and journalistic to openly artistic, critical, propagandistic or even touristic, ranging from smaller disasters that seem almost personal to easily recognizable global crises.

Margaret Bourke-White’s 1952 black and white aerial photo of a near-drowning on the beach at Coney Island, New York, presents dramatic contrasts, symmetry and balance, showing hundreds of people on a beach clustering around a swimmer who has presumably just been pulled from the water. The camera’s elevation allows the photo to incorporate interesting visual features, most strikingly the play of light and shadow cast across the beach from the ocean. While the faces of individuals are impossible to distinguish, the photo highlights the privileged, impersonal perspective of the photographer, suggesting that access to capturing this imagery can turn even a crisis into an appealing photo.

The exhibition also pairs two photos of the wreckage at Ground Zero, shot by David Seccombe and Peter Turnley shortly after the attacks. Both photos, taken from down in the rubble, close to the subjects, underscore how the attack transformed the constructed environment, turning skyscrapers into jagged heaps of concrete, metal and glass. In Seccombe’s photo, the Gothic metal façade of one of the towers has been sheared from the building, but remains intact, tilted toward the sky, recalling the spire of a European cathedral, perhaps proposing a reference to the attempt to damage sacred Western institutions.

Aftereffects in the southwest

One of the most intriguing images is Patrick Nagatani’s 1990 “Japanese Children’s Day Carp Banners, Paguate Village, Jackpile Mine Uranium Tailings, Laguna Pueblo Reservation, New Mexico.” The background features a cemetery on a reservation of the indigenous Pueblo tribe. In the foreground, three illustrated Japanese Children’s Day carp banners undulate from wooden dowels. The superimposed carp banners add a layer of complexity to the photo: they reference both the internment camps for Japanese-Americans in New Mexico in the 1940s, and a traditional Japanese holiday celebrating children’s happiness. Taken in 1990, forty-some years after the internment camps were vacated, the photo mourns for two distinct groups of victims of American racism, brought together unexpectedly in the desert.

Despite being a relatively small exhibit, Aftermath offers a feast of ideas, perspectives, histories and scenes for the visitor to consider. Time spent in this exhibition allows one to travel the world, traverse history and appreciate the impact of crisis through a photographer’s eyes.