“See Through” Reflective And Transparent Surfaces 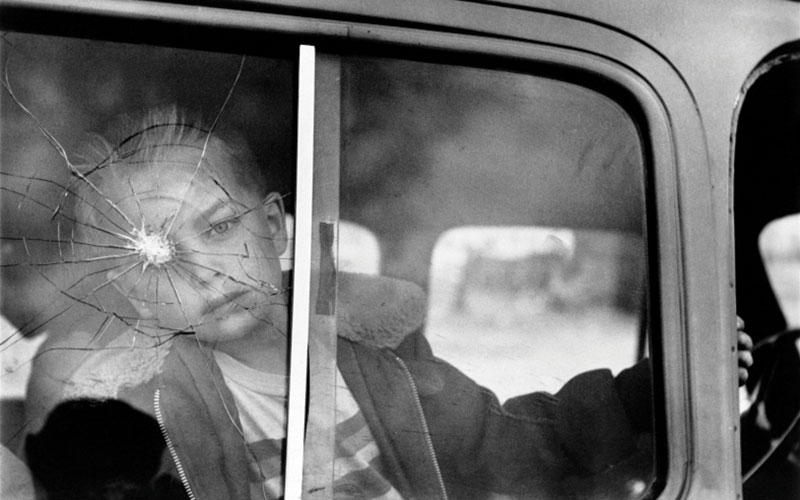 See Through: Mirrors and Windows in Twentieth Century Photography, open to the public through September 23 at the University of Michigan Museum Of Art, makes use of reflective and transparent surfaces to create perspectives and to expand the range of the photos’ possible meanings. These works address life in rural, urban and domestic settings with a searching intimacy.

Two works from French documentary photographer Eugène Atget kick off the exhibition. Men’s Fashion features a Paris shop-window with men’s suits and eerily made-up mannequins in the background. The storefront window simultaneously reflects an image of the street and buildings opposite it. The photo seems otherworldly, a comment on the “strange visual delights” of Paris (cited in the work’s posted description), the city where Atget spent most of his adult life.

The exhibit’s American photography deals with more rural and domestic spheres. Elliott Erwitt’s Las Vegas, for example, pairs an unimpressed white-haired woman with a tacky cowboy slot machine to comic effect. Her expression, as she pulls the machine’s lever (the cowboy’s pistol), may convey resignation or indifference.

An exception to the American rural and domestic scenes is Algimantas Kezys’ photo Reflected Images (Chicago), which features the distorted silhouettes of two men in suits reflected in a broken mirror. Although their faces are impossible to distinguish, it seems they are looking into the mirror. The broken glass distorts the contours of their bodies, making them appear out of joint, out of place. Does the big city warp men?

Man in the Mirror

American photographer Joanne Leonard’s portraits invite the viewer into private spaces, like the home. Man in the Mirror, West Oakland and Merida Morning depict a nude, solidly built man while he shaves and sleeps. The sensual representation of his body invites the same kind of voyeurism implicated in the depiction of the more conventional female nude. Leonard’s third work in the exhibition, a portrait of her daughter titled Winged Ones, depicts the girl looking out a window longingly, with the image of actual insect wings superimposed on her body by her mother through the process of developing the film. The photographic negative and more windows in the rear of the scene add to the sense of the girl being held in a frame.

In all, See Through offers a fine opportunity to delve into scenes of French and American life, with an eye toward the possibilities afforded by mirrors and reflections.