In a self-reflective move, on May 12 the University of Michigan’s Museum of Art opened the exhibition Unrecorded: Reimagining Artist Identities in Africa. An exhibition that addresses the “complex history of attribution and its impact on ideas about Africa and African art still today,” focuses on problems created by non-African representation of African art objects. It starts from the premise that most historical non-African collectors of African art tended not to attribute artworks to individuals; instead, they might include the date and place of collection and the name of a tribe in identifying a piece. Unrecorded notes that in the eyes of 19th and early 20th century Westerners, art from Africa was less the creative expression of specific individuals than the expression of a collective.

The exhibition suggests a nuanced position on the question of attribution. It presents examples of African artworks about which little is known except for where, when and how they were collected, featuring a plaque that says, “Artist unrecorded.” The frequent repetition of the phrase “artist unrecorded” starts to feel strange, noteworthy. These unattributed artworks include carvings from Central Africa depicting ancestor figures, a Nigerian fabric coronet, Nigerian bridal attire, several religious manuscripts, statuettes and a mask. There is also an ornate pen box, whose collectors could have provided much more information about its creator and origins had they paid closer attention to the item.
Unrecorded does not seek to upend the idea that 19th and early 20th African artists were firmly embedded in their social contexts, just that they were anonymous, treating the individual as unimportant. Many plaques offer useful information on the meaning of, for example, the colors used in the fabric of the Nigerian bridal wear, and the gender of the figures in the Central African work depicting a chief and his two wives (“ancestor figures”). In a certain way the explanatory plaques reinforce a feeling that the artworks come from a communal and foreign context, but without the plaques it would be hard for the average museum visitor to appreciate them.

Finally, Unrecorded makes a nod to contemporary African artists William Kentridge and Yinka Shonibare, noting that both have made clear their preference to be regarded first as individual artists rather than African artists, likely reflecting their awareness of how Westerners have represented African art. A plaque in the exhibit directs visitors to a Yinka Shonibare piece, on display in the modern and contemporary gallery, a bridge to further reflect on the nature of attribution and categorization in art. 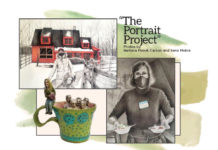