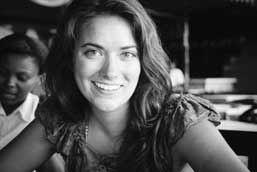 Last year, the history of one of Ann Arbor’s oldest concert venues was recorded in the documentary A Space for Music, A Seat For Everyone: 100 Years of UMS Performances in Hill Auditorium. Now the film has won the 2013 Michigan Emmy Award for Best Historical Documentary, and its director, Sophia Kruz, has already begun her next venture. This time she is traveling the world shooting Creating4Change, a documentary pointing up the role of art in gender equality.

“The film looks at four different artists from all over the world who are using art to make social change for women in very different ways,” Kruz said, Skyping in from Rio de Janeiro, Brazil where she is currently filming graffiti artist Panmela Castro, who’s art centers on issues of domestic violence. 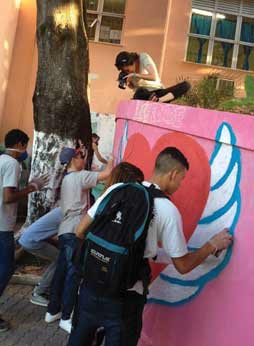 Kruz, an Ann Arbor native and recent graduate of the University of Michigan, worked with the University Musical Society until August of last year before taking a job in the national documentary unit of Detroit Public Television.

Rio was not the first stop on Kruz’s world tour. “I was in India for three weeks with my cinematographer, Meena Singh. We were working with a dancer and choreographer who is using dance to rehabilitate sex-trafficking survivors.”

Kruz plans to visit an American designer from Arkansas who works with a group of women in Nairobi, Kenya, helping them gain status as professional tailors. The designer then hires the women to construct her clothes for the runway

“She works with women who come from very, very low income, so it’s primarily economic empowerment with her,” Kruz said.

She will also film Sister Fa, a Senegalese rapper based in Berlin. Sister Fa’s music speaks to women’s rights and the fight to end genital mutilation in West Africa.

From the beginning, Kruz’s work has focused on social issues. Her first film was about her father coming out.

“That’s what really got me started and hooked on documentaries. After I finished that, I was like ‘there’s nothing else.’”

Kruz plans to someday run her own production company, working with a small team with whom she can collaborate creatively.

Of her Emmy-winning film, Kruz says that the appeal of the film is its strong Ann Arbor ties. “I think people will like it because the stories are fun. Just about concerts and music and good experiences.

Learn more about the film maker at
sophiakruzproductions.com