The master draftsmanship of two of the most significant artists of the twentieth century is showcased in the University of Michigan Museum of Art’s current exhibit “Matisse Drawings: Curated by Ellsworth Kelly,” on view until February 18th. Both artists are associated with color – Henri Matisse with vibrant, expressive canvases, and Ellsworth Kelly with monolithic swaths of color – yet this show is about the primacy of line and drawing to articulate the world. Viewers experience the rare delight of seeing the work of one artist, French master Henri Matisse, through the eyes of another, avant-garde American Ellsworth Kelly.

Drawing was foundational to both artists’ craft. Kelly created more than a thousand botanical drawings alone, and the nine lithographic drawings included in the exhibit are from the years he lived in France in the 1960’s and became enamored with Matisse. “Picasso made me want to paint, but Matisse drawings made me want to draw,” Kelly explained to John Stromberg in a 2014 interview included in the exhibit brochure. “All my sculptures, as well as paintings, come from drawing.” Kelly’s innovative form of abstraction began in France where he studied Matisse’s use of line alone to express and translate human figures and the natural world. 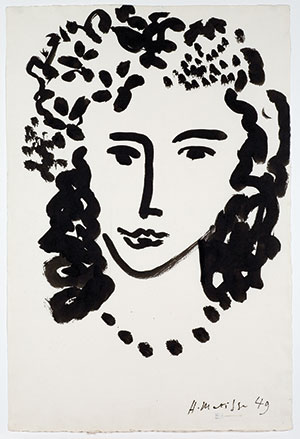 Kelly chose forty-five rarely exhibited drawings that cover the scope of Matisse’s career. He also designed the neutral frames, the matting, the even spacing between pieces, as well as the height at which the pieces are hung in an attempt to create a horizon line recalling his own work. “There is a subtle rhythm of viewing that Kelly encourages visitors to embark on,” says Lehti Mairike Keelmann, UMMA Assistant Curator of Western Art. There are no labels to the drawings by Matisse, in accordance with Kelly’s desire for viewers to experience the work viscerally, to respond to the work’s structure, line, and surrounding space rather than contextual and intellectual engagement.

Meticulous copying not the goal

The progression of the Matisse drawings is visual rather than chronological. A variety of subjects are included; figures, portraits, studies of hands and arms, as well as a self-portrait in the middle of the exhibit positioned to oversee all the work in the gallery. In the portrait drawings, we see Matisse working with form to get to “the sense of an inner character, not only the seen, but the unseen,” Keelmann says. In other drawings, viewers see him making changes along the way and can sense the artistic process.

While Kelly and Matisse approach drawing differently, neither is interested in the meticulous copying of nature, but rather are compelled to use the eye, then the hand, to mediate and translate what they see. Matisse’s emboldened, lyrical, meandering open lines contrast with Kelly’s controlled, assertive closed forms that negate space, yet both are created in the same spirit. “Line has great potential to be communicative and striking. These two artists make the most of this,” explains Keelmann.

When UMMA was structuring the space for the traveling exhibition, they considered the separate components – the Kelly lithographs, the Matisse drawings – and created a path between the two spaces housing each so that people can “physically experience the imagined dialogue between the two artists,” Keelman says. Matisse and Kelly never met, yet this exhibit invites viewers to appreciate the artistic dialogue between the drawings of the two artists, and to surrender to the pleasures of close looking, as expertly guided by Kelly himself.