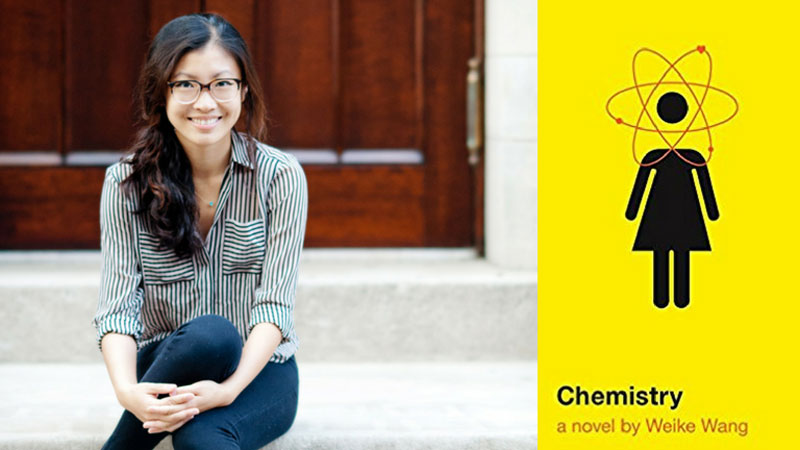 In her masterful debut novel, Chemistry, Weike Wang offers a humorous, moving tale of a young PHD candidate learning to live life on her own terms. The book will appeal not only to academics, of which Ann Arbor has been ranked as having more per capita than any other city in the country, but also to anyone navigating the inevitable ambiguities of life. Wang challenges common narratives regarding failure and success, looking hard at the sacrifices necessary for progress, both in science and relationships. Chemistry is a ferociously funny and nuanced book about inquiry. Wang earned her undergraduate degree in chemistry and her doctorate in public health at Harvard University before completing her Master’s in Fine Arts from Boston University. Current caught up with her ahead of her upcoming reading and conversation with author Lillian Li at Literati Bookstore in Ann Arbor.

Your endearing unnamed narrator needs to understand her feelings to figure out what she wants, but she doesn’t know how. The structure of the book reflects this confusion; when she gets close to difficult emotions, she switches topics. The subjects are related metaphorically, but as we move through the book and she gains self-awareness, her narration becomes more ordered. Could you talk about the novel’s episodic structure?

For some reason, I can’t write chapter to chapter. I keep everything in my head and then I write my way around it. I have a pool of ideas and I’m writing within that pool. I just grow from a center bubble, let the sentences build on each other and see where that takes me. The definition of a novel is not really length anymore. It’s a little more about how much meat is this novel trying to take on? How many ideas is it trying to wrap around? How in depth does it go in certain aspects?

After the narrator dramatically ends her pursuit of a PHD, she begins tutoring. Her interactions with her students contrast nicely to her own academic and familial educational experiences. She begins by telling them to ask her anything – she’s encouraging them to pursue their interests and curiosities. Can you talk about the joy of discovery she shares with her students?

At the PHD level, it’s very difficult to talk to scientists who are on the cutting edge because they’re not interested in explaining anything. She didn’t like that experience. What she loves about knowing science is that she can help students who are struggling with it at the beginning and can’t find a way in. She likes showing her appreciation but she might not necessarily be the one who will “change the world.” We think about scientists changing the world, but the vast amount of people who change the world are teachers. I studied with Nobel Laureates, but they’re the worst teachers because they don’t care about young students. If they have to explain it twice, they get annoyed. My college and graduate school colored how I felt about it after a while. It was a struggle to figure that out.

Just because you like science doesn’t mean you should do science. A lot of factors influence a person’s decision to do anything. She’s an accomplished woman in STEM; buckling under that pressure is hard. We’re always encouraging women to go into STEM, it’s almost to their detriment that we encourage them. I don’t know actually how to fix that problem, or if it can be fixed, or if it’s even a problem, but I see so many girls crumble under guilt that they have to stay in a field because they’re representing a huge population. That’s how I feel sometimes about being an Asian-American writer. I feel like there are certain things I have to write about or certain characters I have to present because great writers like Jennifer Egan, they’re not going to write an Asian-American protagonist. They could, but it’s not really what they’re obsessed about. With this narrator, I was trying to convey so many different threads, but also the burden from many aspects. Once you’re aware of the burden, you’re much more able to deal with it, and in a more productive way than sheer anger or denial.

The information about the destructive potential of science, alongside its healing potential, speaks well to paradox. Can you talk more about this?

I just got tired of the ruse of doctors and scientists: “We’re changing the world.” There’s so much behind that phrase, and I think the history of science helped me with that. Every scientist has shame attached to his or her work, because to get to wherever you need to go, you need to step on a lot of toes. It’s not as pristine and objective and clean as most people think it is. If you meet a doctor, they say they’re saving lives. They probably kill a few to do that. It’s like a negative sum game. I wanted to make that part of the message. If you’re going to go into science and get a PHD, you have to know what is expected of you. There can’t be any sugarcoating with that. Science is good, the work itself is good, but sometimes, when you mix that with people, it might not always be so good. Nobel invented TNT. I don’t think he thought it was going to be used to kill people. I think he was purely pursuing the knowledge. So you reward the knowledge, but then, what happens when people use it for bad things?

The paradox you describe is also reflected in our relationship with new technologies. If we don’t address the character of a technology or if, as a community, we don’t consider what the goal of using the technology will be, we’re just throwing it out there. Maybe with time we’ll learn how to use it, but as you said, these things can be used in multiple ways, for good and bad, simultaneously.

I find that scientists are really detached from the philosophical and moral impact of their work because they’re on the other end of the spectrum. I think it comes from a lack of communication. When I was doing chemistry and English, those departments didn’t talk to each other. It literally takes 20 minutes to go from one department to another, for a reason, I think. The people making sense of technology are in the English department; the people doing it are 20 minutes away. As the future hurls forward, everybody specializes. The more specialized, the farther you get from this core understanding or liberal education spaces where you know a bit about everything.