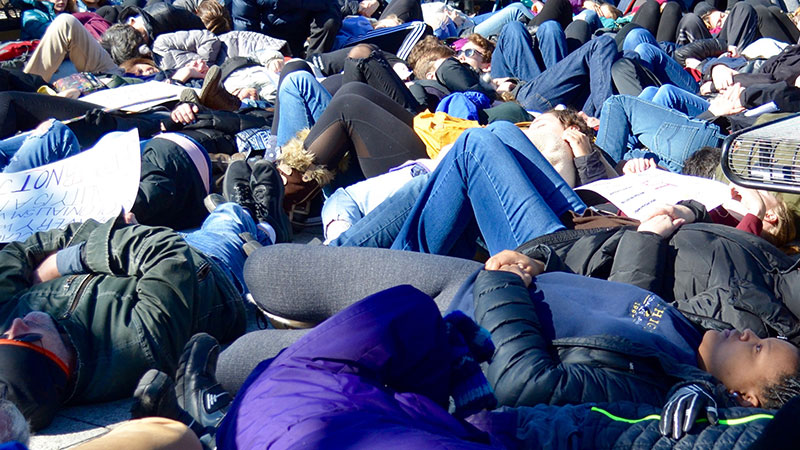 Sarah Lewis had clear goals for the “Die-in” protest against gun violence she spearheaded recently at Ann Arbor’s downtown Liberty Plaza. Inspired by the Marjory Stoneman Douglas student protest in D.C. after the shooting in their Parkland, Florida school February 14th, the Pioneer junior says she “wanted to do something similar, and not only to have people lie down, but also to have opportunities for people to become engaged and take actions to make change.”

Vision achieved. Hundreds of students and local residents gathered under sunny skies for the event on Saturday, March 3. In a moving tribute, attendees were invited to lie down on the ground for six minutes, the approximate duration of the Parkland shooting, while local students read the names of the 17 killed and 15 others injured, along with the names of 33 additional child and teen casualties resulting from shootings that occurred in the time between the Parkland shooting and the protest.

Civic engagement the key to change

Before and after the “Die-in,” student speakers and local officials advocated for stricter gun regulations, and for all present to become engaged in civic life – both those of voting age and those not yet 18. As Meg Goldberg, a Pioneer junior and co-organizer of the event, says, “Although this is a visual representation, we want people to take action because that is the way to really make change.”

Lewis urges people not old enough to vote to believe they have power. “If you can’t register to vote,” she says, you can still “contact your local and national government and elected officials to make your voice heard.”

Embracing the moment, but giving credit to others who built it

One thing local youth want to make clear is that while they feel the power of the zeitgeist, and want to fully utilize that energy, they also want to recognize that other people have been speaking up for a long time. In remarks before the “Die-in,” Pioneer junior Clara Nunez-Regueiro offered historical context to the event. “The Civil Rights Movement of the 1960’s was what propagated what we now know as the “sit-in” or the “lie-in” protest,” she said. “The Chicano Student Walkouts of the 1960’s were a factor in the now-iconic student walkout protest. The AIDS crisis of the 1980’s was what propagated what we know now as the “die-in” protest. Black Lives Matter has been avidly using the “die-in” protest since 2012. The history books are bound to acknowledge the student gun control movement of the 2010’s, but we owe it to our predecessors to acknowledge we are but a part of the road others paved for us.”

Why should school be a dangerous place?

Liam Keating, an Ann Arbor Skyline High School Senior, is emphatic that congress must not ignore public sentiment. “While it’s important to make sure people are safe in schools and enact policies to (ensure that),” he explains, “there are many people who think there are too many guns in the first place, that we shouldn’t be needing to put metal detectors and security guards at the front of schools. Why should school be a dangerous place? There need to be policies enacted at a higher level that aren’t only about securing schools, but securing our country.”

Lewis stresses the youth movement isn’t about repealing the second amendment, but rather “making sure these weapons of war and mass killings are not getting into the hands of dangerous people.” Would arming teachers help? “Teachers with guns. That would be awful.”

Thoughts and prayers not enough

“We are finished with our leaders’ indifference to a problem that takes innocent lives every single day,” says Nunez-Regueiro. “We will not be silenced and we will never be placated with thoughts and prayers. We must hold those who are complicit in the facilitation of gun violence accountable. We are responsible for creating the change we need to see.”