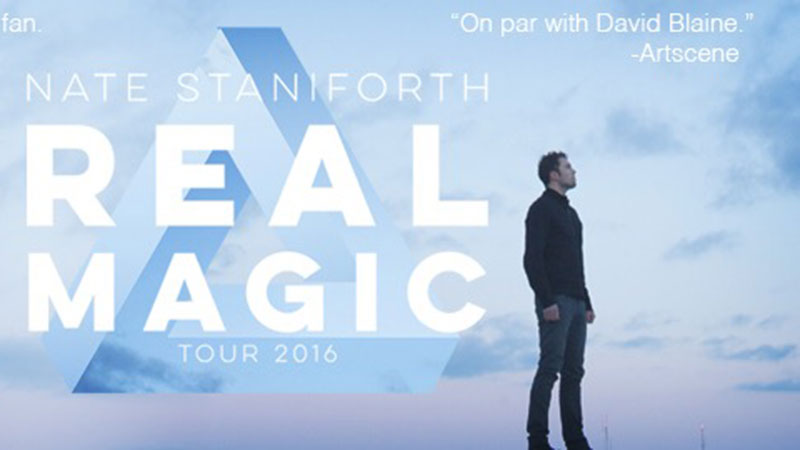 A few years into a successful career as a magician, Nate Staniforth left the relentlessness of the college tour circuit and bought a plane ticket. He tossed a couple t-shirts and a handful of magic props into a knapsack, then flew off to find the meaning of it all in the ancestral home of modern magic: India. The story of that quest is captured in Here is Real Magic: A Magician’s Search for Wonder in the Modern World.

Warning: If you’re into sequins, top-hats, assistants in skimpy outfits, or glitz of any kind, Nate’s not your magician. And he’s probably not your author. On stage and on the page, what you get is a clear-eyed, down-to-earth, plain-spoken presentation that invites an audience to lean in and open up to the possibility that what happens next… might just change everything. Current caught up with Staniforth to learn more about his wizardry.

The term magician can conjure an image of cheesy Vegas sharpy, or a tired birthday party performer. If you had the power to recreate the image of a “magician,” what would it look like? I think it would be part musician, part poet, part artist, part performer, part philosopher. It wouldn’t just be living in the magic, it would be someone working to put a crack in your understanding of the universe, to remind you that whatever you know, whatever you think you know, there is way more out there you don’t know.

I’m working on an article for a medical journal about how we are overconfident in our level of understanding. We put down our perimeter fence and we think we understand everything within our fence. And we are always wrong. Knowing that intellectually is one thing, but really letting it affect your life is another. It’s like being on a rollercoaster, when you go into freefall. That feeling of unknowing freefall is a more honest perception of my understanding of how things really are than any sort of axioms or platitudes I could slap down.

How do you define “wonder?” I would say it’s close to epiphany or revelation. It’s the experience of realizing your understanding of the world is too small. And now you need to make it bigger to make room for this new experience you just had. You can find it in music, movies, poetry, basketball, mountaintops, conversation, barbecue… Sometimes you find it by accident and sometimes you go looking for it. That was the big revelation for me; that you can go out and look for it.

And you’re encouraging the reader to go out and look for it? It’s not that I have an agenda; it’s just that, if I’m honest, those moments are my favorite times of being alive. If I had five minutes to sit down and tell children what really mattered…I would tell them to look, listen, pay attention, look for these moments wherever you can find them. Chase them as far as you can.

Tell me about the last time you were filled with wonder. I’ve got a four-year-old and a two-year-old. We went on a walk the other night and an owl swooped down and landed on top of a sign. Even as an adult that’s pretty great. But for my two-year-old, who had only seen owls in books, to have one flutter out of the night and land right in front of him, it almost knocked him down. He was gob-smacked. Seeing him experience that was magic for me. Pure magic.

How did your experiences in India change your approach to magic? I came home from India like I had been struck by lightening and I didn’t know how to ground it. That’s when I started consciously learning to write, because I realized I’m going to have to share this and I just had to get it out. So, I was writing the book, but also trying to channel it through my magic. It changes the mission statement. My only responsibility is to set an audience’s mind on fire, similar to my experience in India.

Describe your hope for your audience as they leave the theater? It should feel like mountain-climbing, or something that really pushed their comfort zone, rather than a piece of entertainment. Sometimes I get there. Sometimes I don’t. But that’s the goal. Because if they can feel it, the way I’ve experienced it, it’s way more extreme than skydiving. And that’s the least I can do.