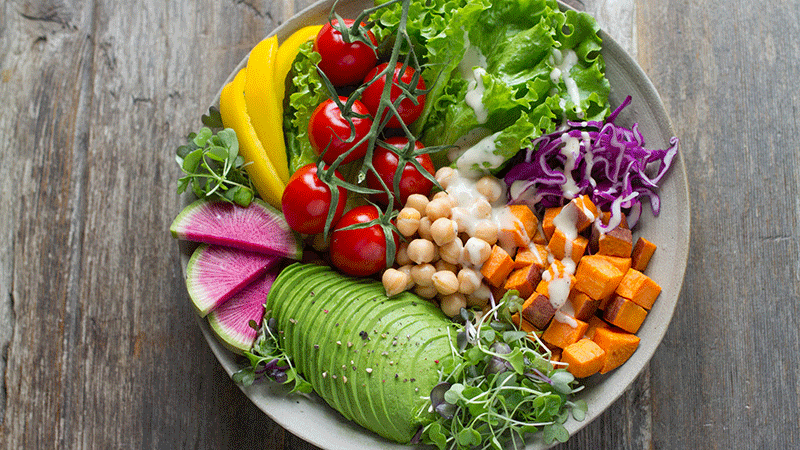 No more scouring the internet for vegan options! Current curated a list of vegan-friendly local eateries. Check them out!

The menu at Anna’s House is entirely vegan, so there is no concern about whether something is vegan, it all is! Try their Big Breakfast, Very Veggie Panini or the Vegan Hippie Hash — all made with delicious, fresh ingredients that will make you want to come back for more!

This restaurant, owned by The Lunch Room LLC, offers only vegan options, such as Raspberry-Basil Grilled Cheese, Buddha Bowl and Detroit Street Hearty Chili. They also have draft beer and cocktails, including their A2 Mule and Triple Goddess. Stop by for Taco Tuesdays from 5-9pm!

This buffet-style Indian restaurant has many vegan options, including salads and dishes such as Dal Moong Wash, Alu Bahji, Masala Tofu and vegan baked goods.

Looking for vegan options that’ll give you enough energy to last until your next meal? Try First Bite’s Beany Bowl, made with seasoned black beans on a bed of white rice topped with corn salsa and guacamole (order without sour cream). Order different vegan burgers, with vegan cheese available upon request for no additional charge​.

Fresh Forage has a wide array of vegan options, including the Szechuan Spoodle, Vegan Yin Yang, or you can craft your own dish, choosing from ingredients such as rice, tofu, potatoes and additional add-ons.

The owner of Hutkay Fusion has a PhD in food science and has a great passion for healthy food! 80% of their food is vegan. Of the 13 sauces made in house, 12 of them are vegan and have no added sugars. In addition, all of the food is free of any artificial colors, flavors or preservatives.

Take a trip to Jerusalem Garden and choose from a wide variety of vegan options like Tahini Salad, Mjaddara Sandwich, Fattoush Salad or their Falafel Plate.

This vegan restaurant has a wide assortment of options, including a beet burger, Banh Mi Chay and pad thai. Many items are either gluten-free or, upon request, can be made gluten-free. They also offer a variety of beverages, such as coffee, tea, Mumbai lemonade and Oaxaca.

With a changing menu each week, Miss Kim’s has your favorites, such as the Buddhist Mushroom Bibimbob, Korean Fried Tofu or Tteokbokki. They partner with several local farmers and purveyors to serve up the freshest ingredients.

Seva’s menu is packed with delicious vegan options, including vegan nacho dip, the Tempeh Caesar Salad, Cilantro-Peanut Stir Fry and Beyond Bratwurst. Other menu items can be made as vegan varieties by substituting ingredients.

Find some vegan goodness at Vedge Café! Some Options include the Kale Salad, Vedge Stromboli and Chopped BBQ Tofu Salad. They also offer many gluten-free options. Choose from a selection of sweet treats for after your meal!

Wilma’s offers many great vegan meals, such as the veggie burger, a beetroot and quinoa patty with veggies and cashew cheese. Try the classic — avocado toast — too!