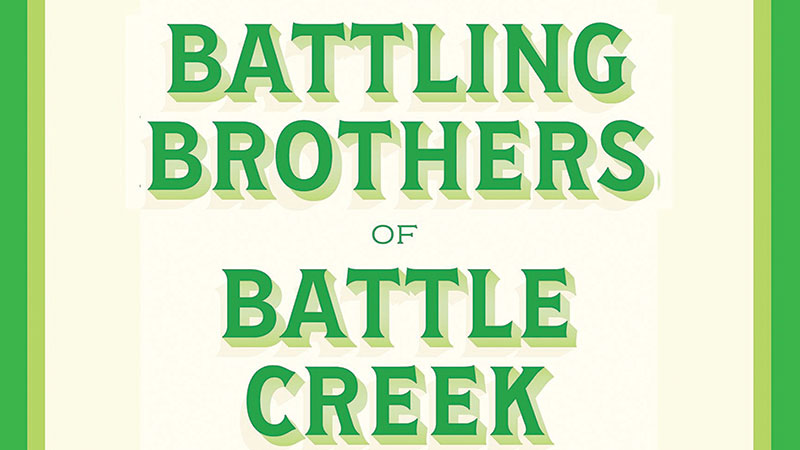 The freshest offering from Howard Markel, medical historian at the University of Michigan and New York Times bestselling author, The Kelloggs: the Battling Brothers of Battle Creek is an exploration of the endlessly captivating lives of two famous Michiganders. Following Dr. John Harvey Kellogg, a prodigious doctor whose ecstasy over medicine overshadowed his regard for those closest to him, and his striving younger brother W.K., who toiled unappreciated under his brother before setting off on his own to great fame and success. Intricate as a textbook author (which he is), Markel displays the kind of candor that arises after an intense study of the two men. Peppered throughout the story are the people that helped shape the Kellogg boys’ success and those that tried to shred it.

In The Kelloggs, Markel explains how brothers John and W.K., while extraordinary individuals, were products of their time in history and all of its gross wonder. The beginnings of the book are mired in the dirt of a developing American landscape, when Michigan was a malarial paradise and doctors earned bad reputations by killing at least as many patients as those they helped. It’s no small miracle that after family members suffered illness and infection, death and inadvertent amputation that the Kellogg brothers survived at all. Mouth hygiene was a riddle largely unsolved, and W.K. entered adulthood with nary a tooth in his skull. John’s insistence on wearing a three piece white-on-white-on-white suit that he would change several times a day sounds nearly reasonable considering how novel the concept of “cleanliness” as we know it today was in that age.

Old-timey charm and whimsy abound in the pages of this book, including copies of Kellogg’s breakfast competitors’ advertisements containing hilarious slogans like “it’s all in the shreds,” to “FLETCHERIZE,” on a sign posted in the sanatarium’s dining room, referring to a doctor who recommended one chew their food thoroughly before swallowing, Markel revels with the reader in the excitement and optimism surrounding the infancy of modern science and industry in the late 19th and early 20th centuries. He leads us from the grounds of the Sanatarium, where John, pedaling an early bicycle with an enormous front wheel, would dictate medical lectures to W.K. as the overweight brother ran behind, to the roof of the building, where John would lead enthusiastic calisthenic exercises for patients with a brass backing band, paving the way for Richard Simmons and Jane Fonda.

Markel discusses the era’s errors along with the glories. The same fanatic pursuit that drove the expansion of his more productive ideas led John to pursue puritanical beliefs while also performing vulgar procedures on adults and children who demonstrated an “unhealthy” proclivity toward sexual behavior. These abject revelations are confounding, and rather than shrug at them, Markel seeks to understand their implications on Kellogg’s legitimacy and legacy.

Once W.K. sets off to form the Kellogg’s cereal business, Markel details lengthy and expensive legal battles between the brothers. That their personal disputes threatened to undermine their respective empires did not stop the Kelloggs from going for one another’s legal and financial jugulars, and one of the many wonders of their story is that either of the brothers actually made it out on the other side with their pocketbooks, or dignity, intact.

By the time they died in the middle of the 20th century, the brothers Kellogg had seen the expansion of antiseptic hospitals, diet consciousness, and a box of cereal in every American home. With each bitter dispute and moral failing, brilliant invention and genius implementation, the engrossing pages of The Kelloggs: the Battling Brothers of Battle Creek brings us closer to the two men who made it possible.

Howard Markel will be reading from his book at Zingerman’s Brown Bag series on Wednesday, November 7th from 6-8pm at ZingTrain, 3728 Plaza Dr. Ann Arbor.

The event is free.