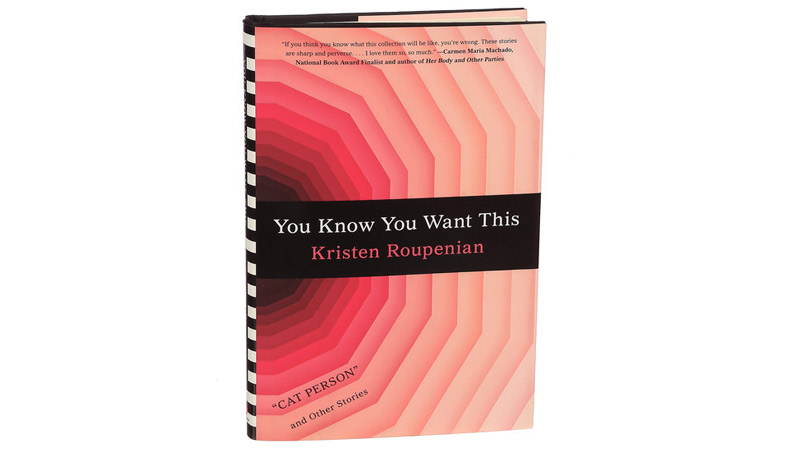 Kristen Roupenian’s You Know You Want This is a collection of short stories that revels in the mystifying aspects of interpersonal relationships without ever feeling the need to justify them. Most stories simmer, with a lurking tension that splits the surface in surprising ways. Others feature no eruptive moments, but explore the trauma that even dissipated tension leaves behind. The author dips into science fiction and horror with a graphic novelesque vividness that is often surprising. Stories begin a la Charlotte Bronte and end a la Alan Moore, and like the characters in these pages, the reader navigates Roupenian’s familiar world unable to trust their expectations.

Plots that will Stay with You

“Cat Person,” the story which adorned Roupenian with the grand and gross baubles of internet virality in 2017, follows a brief relationship between a young woman, Margot, and a man many years her senior, Robert. The author casts a blanket of unease over their interactions from the start. Attempts at flirting are stated so plainly that they become unsettling, as Margot has to talk herself into wanting the relationship to continue. Eventually things go too far, and their inevitable breakup finds Robert trying to sabotage Margot’s attempts to move on.

The following story, “The Good Guy,” contrasts the former’s narrative of uncertainty that crashes down in a moment of clarity with one in which a protagonist who has all the answers realizes in a sudden record-scratch moment that he may have been wrong the whole time. A twisted origin story, Roupenian takes the readers to the relationship that created this paragon of mundane toxicity. Our villain protagonist, Ted, sleeps with the love of his teenage life through such contrived and cynical circumstances that he seems doomed to repeat them the rest of his life. Of course, cynicism and misogyny are choices, not curses, and he ultimately gets his comeuppance in an incendiary twist finish.

“Biter,” “Sardines,” and “The Matchbox Sign” follow a similar formula. The latter chronicles a wife’s mystery illness and her husband’s attempts to aid her recovery. It seesaws between soap opera and sincere character study, its resolution frustratingly beyond reach. That is, until a genre-flipping twist obliterates any hope for a happy ending. “Sardines” treats a family drama with a similarly violent conclusion. “Biter” is a lighthearted exploration of abject desire. Like Ted, Ellie schemes and plots to achieve her wretched goals. Unlike Ted, however, she isn’t in denial about how wretched her goals are. Another twist ending means she plays a role in stopping an office abuser. She gets her cake and literally gets to eat it, too. As the last story in the book, it’s surprising that the reader is allowed to finally root for the creep.

Occasionally, You Know You Want This dives right into the deep end of genre fiction, as in “The Mirror, the Bucket, and the Old Thigh Bone” and “Scarred.” “Mirror” tracks like a parable, but ends as an ode to nihilism. A princess needs to be married, and makes some bad choices. However, when the prince rides in to save the day, we learn how long term problems require long term solutions, and his misguided righteousness only leads to his downfall. In the end, everybody dies and is forgotten anyways. “Scarred” similarly demonstrates the lengths to which one will go to achieve their darkest desire. The answer is very, very far.

Roupenian’s tendency for story-flipping twists makes the few without them stand out even more. There are no superbugs or ritual sacrifices in “Look at Your Game, Girl,” “The Night Runner,” or “The Boy in the Pool.” Their plots find resolution, but their simmering unease never disappears. In these stories we see most of all where trauma and loss linger even after the story ends. The protagonist in “Game” never escapes the memory of a strange man she meets as a teen, while the characters in “Pool” meet their teenage heartthrob twenty years later, yet their problems remain unsolved. “Runner” takes place from the view of the stranger and we see his inability to correct a world that doesn’t need correcting.

You Know You Want This is Roupenian’s first book, but its subject matter is as varied as if it was a collection of stories from a long career. However, her eye is unquestionably contemporary. Her take on gender dynamics in relationships will challenge the reader, especially the male one, to reconsider their expectations. This, joined with her ear for twists and genre fiction, makes the read well worth it.