Cannabis enthusiasts rejoice! The legalization of recreational cannabis in Michigan has opened the doors to an ever-evolving culture of cannabis consumption for novices and connoisseurs alike.

The bulk of cannabis offerings are produced for smoking or vaping in the form of cured flower, concentrates and distillates. However, many avoid inhaling smoke or even somewhat cooler vapors.

The medicinal or mood-altering effects of THC has created a growing demand for cannabis edibles, including THC and CBD infused treats and foods that can be metabolized by the body through the digestive system instead of the lungs. Brownies may be the most well—known cannabis infused sweet treat, but paying attention to the rapidly evolving cannabis industry reveals the plethora of intoxicating cannabis edibles now on the market.

Gummy bears, chocolate bars and cannabis infused cold brew can be found at local dispensaries. Gummies are beloved squishy sweet treats with every flavor under the sun,  in shapes from worms to bears, have become standard THC treats.  Manufacturers readily admit that gummies are the least difficult product to precisely dose with THC and folks seem to like them. There are, however, so many other wonderful possibilities for cannabis edibles.

Those culinary creations require care in cooking AND in dosing.  Diners and participants all want to know the amount of THC we are consuming. In this regard, the edible cook’s best friends are a gram scale and a calculator. When designing a menu, the soul of a cook longs for a rich, cultural context for their dishes. The modern chef, therefore, is often one part cook and one part historian.

Adding cannabis to the potential ingredients offers an opportunity to research the deep and sometimes mysterious history of humanity’s relationship with cannabis cuisine, a partnership that dates back thousands of years, perhaps as far back as 8000 years ago with the ingestion of cannabis seeds and oil in China.  Not surprisingly, ancient people’s use of the cannabis plant went beyond nibbling seeds, weaving hemp clothing, and smoking cured flowers.  Our ancestors were also skilled at producing cannabis concentrates and edibles.

The most well known and widely documented use of concentrates was in the form of hashish or hash, today called bubble hash. According to Wikipedia “The first attestation of the term “hashish” is in a pamphlet published in Cairo in 1123 CE, accusing Nizari Muslims of being “hashish-eaters”.  This is perhaps also the first reference to cannabis edibles.

Hashish is made through a process where the THC-rich trichomes (“pollen”) on the cannabis flower are separated from the rest of the plant through filtering/sifting and then heat and pressure are applied to these trichomes which turn the trichomes into a sticky resin hashish cake. Perhaps not much has changed over the last 1000 years when it comes to hash.

Great Literary classics like Alexander Dumas’ The Count of Monte Cristo, feature the consumption of hashish and describe the users’ experience in vivid detail. Dumas was a noted member of the The Club des Hashischins, a Parisian group dedicated to the exploration of drug-induced experiences, notably with hashish. In addition to Dumas members included Victor Hugo, Charles Baudelaire, Gérard de Nerval, and Honoré de Balzac

Hashish edibles had already reached a zenith of culinary and cultural prominence nearly 8 centuries before Dumas’ opus, in Morocco:  a fruit, nut, butter, honey, spice and hash truffle recipe known as “mahjoun” became as well integrated into the local lifestyle as red sauce in Sicily.

David Bienenstock writes in Leafly, “Don’t think of mahjoun as a single recipe, so much as a basic set of techniques and ingredients upon which to build a unique take. Much as every Italian grandmother holds fast to the family’s secret recipe for tomato gravy, a Moroccan family would have their own unique way to prepare mahjoun.”

The Alice B. Tolkas Cookbook, written in 1954, credits mahjoun as the predecessor to hashish fudge which has evolved into the modern incarnation and now widely known as cannabis brownies. Mahjoun offers the home or professional cook a wider spectrum of creativity and opportunity for building an exotic flavor profile that remains elusive when considering the standard brownie recipe.

The rich history of Mahjoun also conjures up both its ancient origins and century old traditions both in Middle Eastern and European cultures.  What follows is a recipe for this treat which will please ALL the senses.

The secret ingredient in this version of mahjoun is orange blossom water.  If you can’t find this wonderfully fragrant liquid at a local Mediterranean grocer, you can find it online.  The orange blossom water blends beautifully with the exotic spices and the terpene rich concentrate coconut oil infusion in this recipe.

Eating raw cannabis flower will very rarely get you high.  Raw cannabis flower must go through a process of decarboxylatation  (the removal of a carboxyl ring), also known as decarbing, in order to convert THCA, an inactive form of cannabis, to THC the psychoactive form.

The main catalysts for decarbing are heat and time, which occurs when combusting cannabis or converting an extract into vapor.  Cooking with cannabis requires us to decarb the cannabis before we add to our dishes in order to activate the THCA.

Important considerations when decarbing are containment and precision. I don’t want my entire house to smell like cannabis, and I want to retain as much THC as possible through the decarb process.  I use the Ardent Nova decarboxylator, a  sealed precision tool that looks like a small thermos.

Once your cannabis is decarbed it is ready for consumption or infusion.  Limiting the decarbing process, thereby destroying THC and flavorful terpenes, can be helpful to infuse oils and fats at a low consistent temperature.  A sous vide cooker is a very good method for this step.

Chef’s note about dosing (and doing the THC math)

For this recipe the mahjouns are made with approximately 10 mg of THC per truffle, a dosage arrived at by working backwards.

Each mahjoun will be 1 ounce or 24 grams and we are making 25 pieces. Our cannabis coconut oil has 550 milligrams of THC.  Anticipating losing  a little bit of the THC in the decarbing process will result in approximately 500 mg of THC.  We want 250 mg of THC for our recipe, therefore we will use half of our infused cannabis oil in the recipe.

(Remember, you will only be using HALF the amount of this oil in the Mahjoun recipe.  Reserve the other half for another batch or for other dishes)

Enjoy at your leisure!

About the Chef / Author:

Magdiale Wolmark, is a noted Ann Arbor area chef and an edible chef for Winewood Organics where he is currently working on  a line of ancient edibles including mahjoun.

He is a two-time James Beard Award semi finalist, The Clash of the Vegetarians Champion on the Food Network’s Guy’s Grocery Games, and is considered a pioneer in the Midwest locavore movement. A Silver Medalist in Tai Chi in the Beijing World Martial Arts Olympics, he has woven his love of good food and social gathering with his sensitivity to healthy cooking. 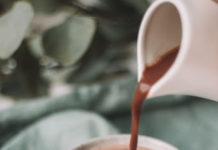 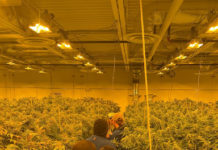