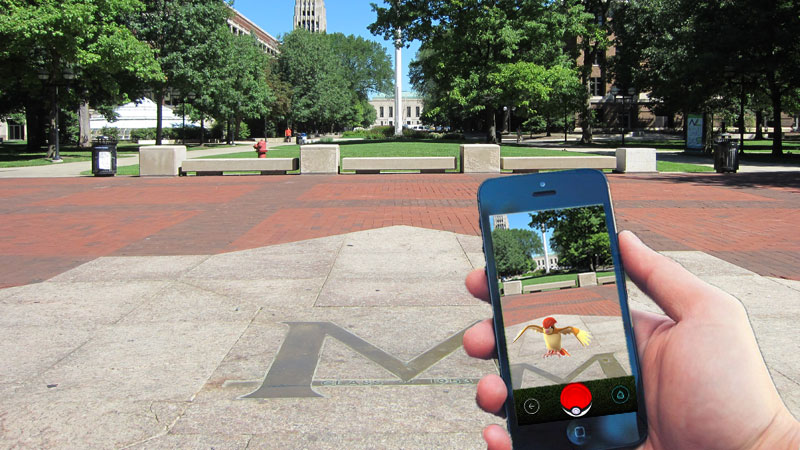 The Pokémon scene in Ann Arbor is lit. Since the game launched last Wednesday, Nintendo has seen millions of app downloads, and the game is already installed on over 5% of Android devices in the US. The game is a mix of map data that leads you through the world to find Pokémon, usually located near Pokéstops — real-world landmarks like the Michigan Theater. Once you find a Pokémon on the phone screen, the app switches to augmented reality, allowing you to catch the creatures using the phone’s camera.

“(Pokémon) Go” downtown and you will see hundreds of Pokéstops that range from historic brass-placarded structures to popular night clubs. Niantic, the company that developed the app, drew on portals and locations submitted by users in its older apps, Ingress and Field Trip. Although the Niantic database isn’t currently accepting new locations, check out some of the Pokestops you can currently visit. (We aren’t even going to get into gym locations or comprehensive lists; there are just too damn many.)

So if you’re still wondering why hoards of undergrads are more conspicuously locked into their phones, fixated on inanimate objects, now you have an idea. The Pokémon scene is hot in Ann Arbor right now. There’s probably a Weedle somewhere in your vicinity at this very moment. This techno-social phenomenon is sure to be short lived, but it’s fun for at least a couple days. In the meantime, look out for aloof pedestrians…and drivers, as they float through the real world compelled by Pokémon Go.