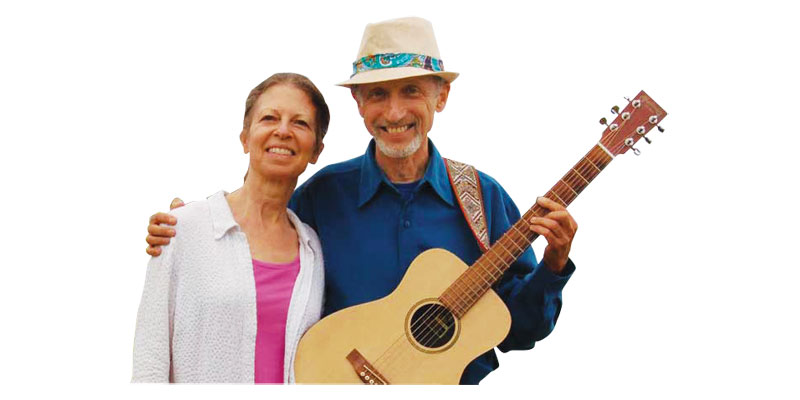 Robert Frost once said that, “Poetry is when an emotion has found its thought and that thought has found words.”

If that thought included music and song you would have an incredible collaboration of poetry by Jennifer Burd with musical settings by Laszlo Slomovits entitled Receiving the Shore. Although putting poetry to song is nothing new — Robert Burns infamous Auld Lang Syne was a Scottish poem later put to music — Jennifer and Laszlo’s combined creative talents are a unique yet nostalgic journey that reminds us of the forgotten art of the folk song.

Burd is a native born Michigander who moved to Seattle but later returned to her roots in Ann Arbor. In her poem “Winter Day” she describes a “1920’s dairy barn, shuttered and still, standing, braced and beamed, its builders never believing they’d be gone.” The barn itself sits on property where Burd was living until a year ago, in an apartment in an older house with a lovely view of the barn. Seeing that old barn brought back stories she had heard of her great, great, great, great grandfather who lived near Ann Arbor in the 1800s and was a farmer. Inspiration hit and the poem was born.

Hungarian born Laszlo Slomovits was raised in a musical family. His father was a synagogue cantor and he, and his twin brother, served as his father’s two-boy choir. Slomovits credits everything he learned about singing to his father. At age 7 he learned to play the violin and then became well versed in other instruments including the slide guitar, mandolin, panpipes and various types of folk percussion.

Although the pair have written many poems together, several of which have been published in journals, this is their first book/CD. Prior to Receiving the Shore, the pair’s collaborative works have appeared in a children’s play I Can Hear the Sun, as well as workshops and live performances where Burd reads and Slomovits creates music spontaneously. Through various musical instruments such as the pennywhistle or the Native American flute, Laszlo is able to create an auditory experience that meshes seamlessly with Burd’s prose or poetry.

Their latest collaboration is a compilation of poems that explore Michigan’s four seasons through sight and sound. Readers are introduced to each season through a series of Haikus, a Japanese form of poetry that employs highly evocative allusions and comparisons and sets the tone for the longer, more traditional poems. Burd’s expressive descriptions of nature, set to Slomovits’ fervent notes, means readers truly hear the sound of rain in “Rain Is” or the promise of winter with “In Winter.”  Every poem brings forth a thought, an emotion or a memory. Listening to “Solstice Hymn” and it’s easy to feel the stillness and hear the birds in the trees while tracing the cold stone on the grave markers in the cemetery.  Each of the poems sends readers on a magical voyage that will take them back to a warm summer’s day, a cricket’s song, the leaves in autumn or the rushing of the shore. Receiving the Shore is a colorful journey of days gone by and promises of days yet to come.

Join Burd and Slomovits for a reading and book signing
3pm Sunday, April 24 at Nicola’s Books, 2513 Jackson Ave. in the Westgate Shopping Center.
734-662-0600 | nicolasbooks.com
For more about Poetry into song go to; PoetryIntoSong.com