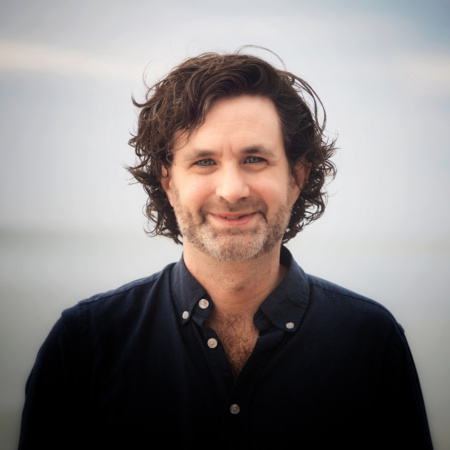 Dr. Scott Hershovitz, the Thomas G. and Mabel Long Professor of Law at the University of Michigan Law School in Ann Arbor, talks about his kids all the time when he’s teaching, so it seemed only natural to write a book about them.

“If I’m teaching about punishment, I might start the conversation by describing something one of my kids did and asking how we ought to respond,” explained Hershovitz, the director of U-M’s Law and Ethics Program. He lives with Julie Kaplan, his wife of 20 years, in Ann Arbor with their sons Rex, 12, and Hank, 9, the source of his inspiration. 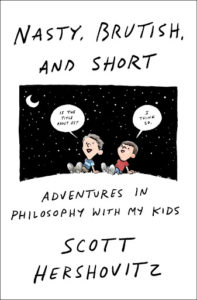 Hershovitz continued: “That would get everyone engaged and talking about the purposes of punishment before we took up the cases or articles I’d planned to discuss. At some point, I realized a broader audience might appreciate that approach to philosophy.”

And so came Nasty, Brutish, and Short: Adventures in Philosophy with my Kids (Penguin Random House $28), his first book. The book – which he’s called “an irreverent introduction to philosophy – and a plea to see kids as the serious thinkers they are” – is based on conversations he’s had with his sons.

“Kids are really fantastic philosophers,” said Hershovitz. “From the time my boys were little, they’ve asked philosophical questions and tried to answer them – in super clever ways. And all little kids are like that. I wrote the book because I wanted to help parents appreciate that aspect of their kids – and recapture some of their own wonder at the world.”

Kids are the Best Philosophers

In his own words, Hershovitz explained why he believes kids are the best philosophers of all.

“Kids are puzzled by the world, and they are trying to puzzle it out,” he said. “They don’t yet know what adults take for granted, so they ask great questions. And they aren’t afraid of seeming silly or getting things wrong, so they try to answer them too.”

“When Hank was 3, he took revenge on a kid that insulted him at school,” recalled Hershovitz. “And he just thought it was obvious that you should strike back when someone insults you. He got me wondering: Why does it strike so many people as obvious that we should take revenge in response to wrongdoing? I think the answer is that we’re defending our social status. In striking back, Hank sent a message – that he wasn’t the kind of kid who could be insulted like that. And he made clear that there would be a cost to kids who attempted to insult him.”

“When he was 4, Rex asked if God was real,” recalled Hershovitz. “I asked what he thought, and he said, ‘For real God is pretend and for pretend God is real.’ I found that really striking. And the more I thought about it, the more I realized it captured my view. I don’t believe in God – at least not as the stories are commonly told. But I do go to synagogue and celebrate lots of Jewish holidays. I’ve always been a bit puzzled as to why, but Rex helped me understand. In the same way that pretend play makes kids’ lives more magical and meaningful, pretending that God is real enriches my life – it gives me ways of marking significant events and gives me reasons to gather with family and friends and participate in beautiful rituals.”

Initially, when he was a freshman at UGA, Hershovitz wanted to take an introductory psychology course, but it was full. Instead, he took an introductory philosophy course. As a result, he became an accidental philosopher, something he’s stated in interviews. Hershovitz is interested in philosophical questions related to law. He writes about the nature of law, the obligation to obey the law, the rule of law, among other topics.

“I was drawn to law because it felt like philosophy with consequences,” said Hershovitz. “Lawyers are interested in ideas and arguments, but law is also a tool that can be used to help people.”

From 2006-07, Hershovitz clerked for the late U.S. Supreme Court Associate Justice [Ruth Bader Ginsburg]. She served in the [U.S. Supreme Court] from 1993 until her death in 2020. Ginsburg was a fierce advocate for women’s rights and gender equality.

“I learned a ton from her,” recalled Hershovitz. “I don’t think people realize just how accomplished she was as an attorney before she ever became a judge. It was a privilege to help her with her opinions, and she improved my thinking and writing. She was also just a lovely person. Some of my favorite times in her chambers were people’s birthdays. Her husband, Marty, would bake a cake, and we’d gather in in her office to celebrate together.”

“The Court seems set to roll back some of the gains for women’s equality that she helped secure,” he said. “But I think history will see her roughly the way it does Thurgood Marshall – as the legal leader of an important social movement for equality.”

Prior to joining U-M, Hershovitz was an attorney on the appellate staff of the Civil Division of the U.S. Department of Justice.

“I really love teaching,” he said. “I love to help new students find their path in the law – and to help young philosophers sharpen their thinking about important issues. I also love the flexibility. As a professor, I get to work on the issues I care most about, rather than respond to my clients.”

Book Has “Struck a Chord” with People

Besides teaching, Hershovitz has written articles and essays for several legal journals. One notable essay he wrote for the Stanford Law Review was called “Harry Potter and the Trouble with Tort Theory.” He’s also written about singer Taylor Swift for The New York Times, where he writes op-eds on philosophy.

His next book, Law is a Moral Practice, is an academic project about law and its relationship to morality. It will consider questions like “Are we obligated to obey the law?” and “What’s the rule of law?” It is slated for publication in 2023.

So far, Nasty, Brutish, and Short has received critical acclaim from NPR, Kirkus Reviews, and Publishers Weekly. This has been a pleasant surprise for Hershovitz.

“The stories about my boys – and the lessons we can learn from them – have struck a chord with a lot of people,” he said. “I’ve received letters from people across the country – and really around the world – thanking me and, more so, the boys for helping them to think differently about God and other important issues. And I’ve been doing lots of radio and TV since the book came out; it’s terrific to see so many people interested in philosophy.”

According to Hershovitz, the title of his book is from a phrase coined by 17th century English philosopher Thomas Hobbes, considered to be one of the founding fathers of modern political philosophy. Hobbes argued that life without any government at all would be “solitary, poor, nasty, brutish, and short.”

“I teach about Hobbes a fair bit, and at some point, I realized that ‘nasty, brutish, and short’ also describes little kids – at least some of the time,” he said. “My kids, I should say, are also cute and kind – and they are more often cute and kid than nasty and brutish. But the book explores topics like revenge and punishment, so the phrase seemed an apt title.”

“Nasty, Brutish, and Short: Adventures in Philosophy with my Kids” is available where books are sold and in town at LIterati Bookstore.