The first time I heard JUNGLEFOWL, they knocked me out of my chair. It was 2015 and Melissa Coppola had sent me the tracks that would eventually be released as the debut EP for her new band with guitarist Stefan Carr–a power duo! But a power duo that I couldn’t place, in the best way–it was heavy–but melodic, loud–but lush, a frenzy that was finespun…not punk but also not metal. It channeled substantive anger into an elegant expression that surged a human soul through the distortion and belligerent buzz–and the drums were balletic cinder-blocks.

The Ypsi-based duo are pretty much masters at the game of music, but Junglefowl is their outlet for their more woolly and wild sides. They’re professionally trained musicians who also, now and in the past, have professionally train younger music students–but when they get on stage as Junglefowl, all bets are off.

Coppola was integral in kick starting (and now facilitating) the Girls Rock Detroit Chapter. Before this, in fact several years back, she was in a more folk-inclined duo–making Junglefowl’s departure that much more underlined. Carr, meanwhile, has been in the fuzz-rock game for a while, with groups like The Loveseats and backing up Troy Gregory’s Witches. Junglefowl’s got a fresh new heavy-garage sound on this new EP. It’s coming out on November 9th.

I caught up with this married musical duo to talk about developing this band over the last three years, as well as the community of similarly nuanced punk/hardcore/indie/metal/loud bands that have started to blossom right along with them. 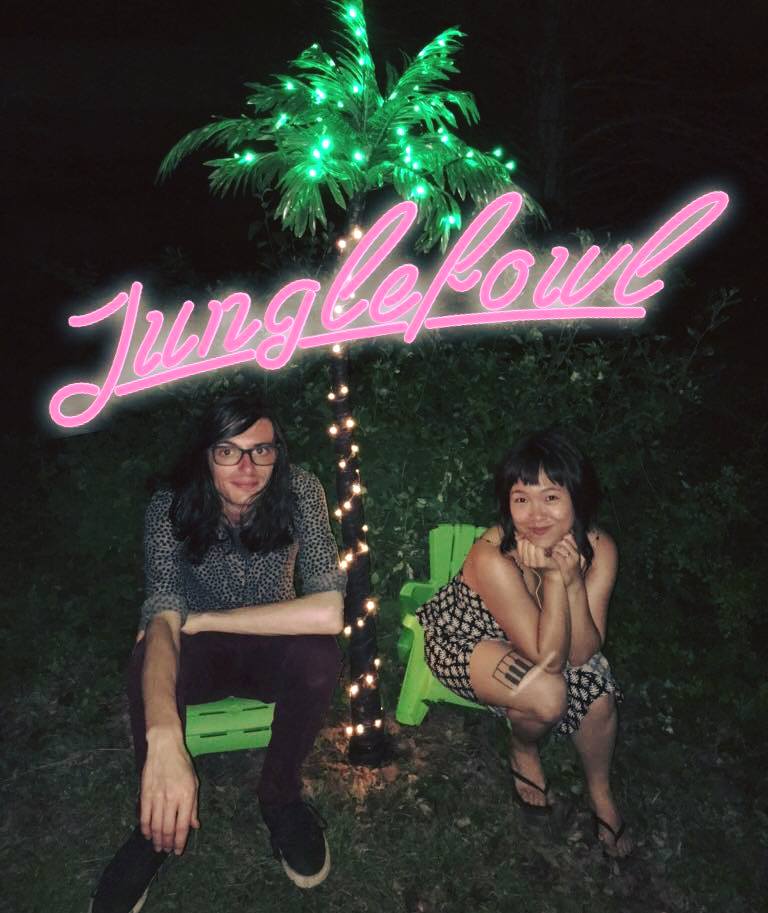 Can you talk about a song like Front Line…,and what it feels like to be in a punk band (or at least a band that’s billed with punk lineups) in late 2018 vs early 2015? What distinguishes the energy and emotion on this EP vs the first one?

Melissa Coppola:  As far as being a punk band, I have to say that I never really consider us to fall into that genre – when people ask what sort of music we play, we tend to round up to rock – but the punk qualities are generally there. It’s loud. It’s raucous. We let our hair down, and it’s an opportunity for us, as relatively quiet people, to get on stage and be so loud and weird that people can’t ignore us. That much hasn’t changed. But this EP – after three years of tweaking, fine-tuning, and sometimes scrutinizing (thanks to our very patient engineer and friend, Rishi Daftuar) – is an ornamented spectacle of what we know as our band. Folks often ask us if we’ll add more musicians to our band, and the answer’s no…! ….Not anytime soon, at least. What you’re hearing on the EP is a peephole into what comes out of us only when we’re in the studio. It’s a completely different medium for us.

And the song, Front Line, is probably the most happy and upbeat sounding song we’ve ever written, so it was hard to decide exactly where to put it in the context of the record. To be perfectly honest, I think it originally spawned from a self-imposed need for our band to have a “danceable” song to break up the heavier sounding songs of our set, but it serves a special purpose with Secret Society.

How would you describe the new EP?

MC:   Secret Society is a survival story told backwards, a la Memento, in a series of emotional vignettes. The sequence suggests flashbacks of a past life where perhaps you wouldn’t recognize yourself or the people you trusted – but emotional memories are vivid and the echoes of things people say to you are hard to shut out. It’s inspired by from coming to terms with who you are, and what your genuine thoughts are. When you’ve heard you are or aren’t [insert anything here] for so long from people you love, how can you tell? When you’ve lived in an environment where you have to follow secret, arbitrary rules to please the people around you, how do you recover?

I think a lot about our generation and how our lives are lived digitally in highlight reels, and we how admire people [survivors] for their strength, while not ever being able to fully understand their darkest experiences and what makes them who they are. This record is, perhaps, trying to facilitate some thinking around those complexities.

You’re both versatile musicians with a mix of genres in your repertoire. If donning the Junglefowl Suit would be like becoming some kind of alter ego superhero – what is key to inhabiting it, what’s key to channeling this blend of rock-punk-garage, in terms of how you approach it as musicians?

MC: I think it’s letting loose with experimentation and creative process initially – and in the recording studio, we’re just building up from there. I can’t remember what interview I heard this in, but I once heard a musician compare experimenting with musical style to trying on different clothing, and I really connected with that. Our aesthetic has, and will continue, to change, but our identity as musicians is still at the core of that…Because Stefan is writing most of the guitar lines and I’m going for melody and lyrics, I think we’re probably coming from slightly different places in channeling our energy in writing, but on stage I think it’s probably from a collective effort to be tough, a little angry, and owning it. Our performances can be totally therapeutic for me.

What’s your thoughts/feelings about something else that’s changed over the last 3 years since the first EP debuted… a rise in women-led punk bands like WOMB, Free Bleeders, Slob, Girl Fight…, bands that Junglefowl often joins for shows.

MC:  Yes! All the feelings! It’s beyond exciting to see more women and gender non-conforming musicians lifted up and celebrated for the badasses they are. (Not to mention that it’s pretty much the coolest when it’s also people you know and love that super duper deserve the successes.) I feel so lucky to be a party of a music scene where this is happening. The mutual respect we’ve got going on is incredibly affirming and empowering.

Can you talk about the Muddy Waters cover? That line about having ladies under control bent my ear…what drew you to this song and what did you wanna say about making it your own?

MC:  With National Coming Out Day just having passed, I’ll share something that some folks might not know – when we cover songs, I don’t ever think about changing pronouns/lyrics to suit my gender in performance because I am queer. The “ladies” part of the lyrics just stayed because it felt genuine as is. But also, I think the song also takes on multiple meanings when we perform it. I think on a surface level – especially at the beginning – it can have a seductive, siren-song kind of appeal… but more so for me, it becomes of a rallying cry for my ‘ladies.’ I imagine I’m leading a mass of talented, amazing folks who aren’t recognized for what they can do: “I’ve got my mojo working, it just won’t work on you,” where ‘you’ is anyone who brushes you off like you don’t matter. I’ll show you I matter!

Where was the EP recorded and what was the recording experience, overall, like? Also…, what’s coming up?

MC:  Our good friend and recording engineer, Rishi Daftuar, took amazing care of our songs. Having a great friend who’s also a musician with a home studio that we love hanging with – and his wife, Elly, who is equally awesome – made the experience of recording totally different. I can’t think of anyone who’d be as patient as Rishi was – especially when Stefan or I would jump up and say, “I have this weird idea, it might not work but can we try it and see?” nearly every session. He let us take our time. I think his willingness to embrace our creative process – and sometimes just humor us – really reflected in the tracks. He took delicate care of each and every one, and the final product is beyond what I ever expected it to be. I’m beyond grateful to have had Rishi and Elly on our side through this project and I’m so proud of how it turned out.

We’re also super grateful to have worked with powerhouse photographer Miles Marie (Nomadic Madam) to create some really amazing album art along with the stylings of Courtney Spivak of Ex American. Stefan and I are not necessarily ones to showcase our own image on the front of a record, but the aesthetic they created together with this phenomenal photoshoot really ties it all together. It’s a true “Junglefowl Suit,” as Jeff Milo might say.

The new EP will be available online on Friday, 11/9.