Detroit native serves as showrunner of “The Winchesters” series 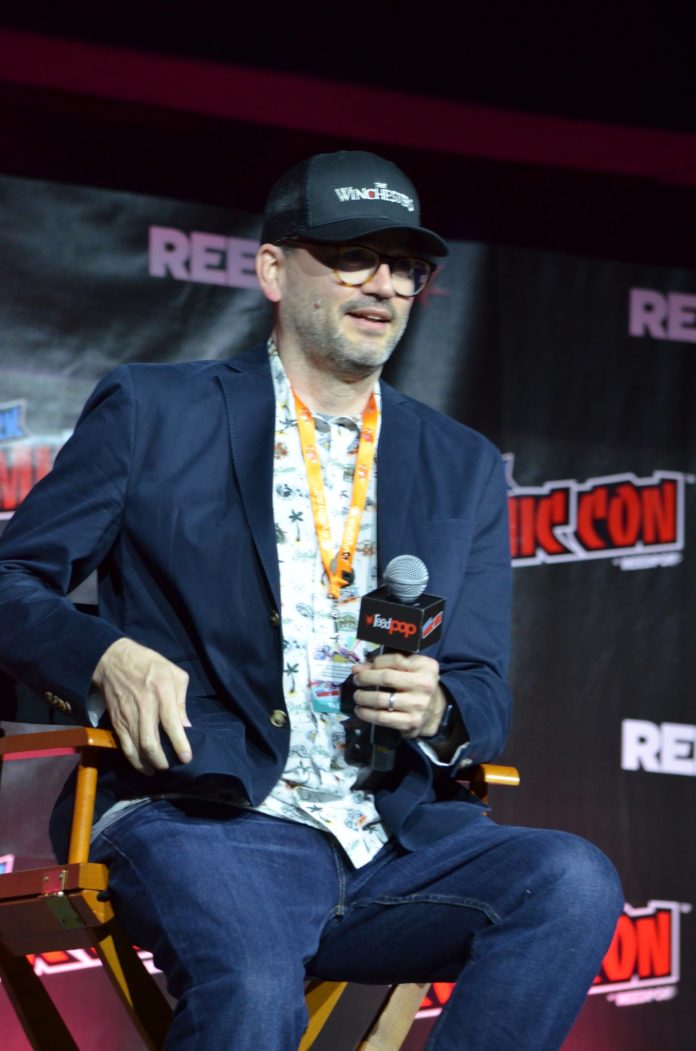 Detroit native Robbie Thompson described “The Winchesters” – which recently debuted on The CW – as the “Supernatural” version of “How I Met Your Mother.”

Set in the world of “Supernatural” – the longest-running genre series that spanned 15 seasons, chronicling the adventures of the Winchester brothers Sam (Jared Padalecki) and Dean (Jensen Ackles) who hunted monsters in a black 1967 Chevy Impala – “The Winchesters” occurs in the early 1970s and centers around the brothers’ parents John Winchester (Drake Rodger) and Mary Campbell (Meg Donnelly).

In “The Winchesters,” Dean narrates the story of how his parents met, fell in love, and fought monsters together while searching for their missing fathers. After returning from Vietnam in 1972, John runs into Mary in front of a movie theater. There’s an attraction between them. Later that night, a demon assaults John who’s saved by Mary, a trained monster hunter who definitely channels her inner Buffy Summers, and is pulled into her world as a result.

“One of the things we got to do in ‘Supernatural’ was this idea of there’s the family you’re born into and there’s the family you find. We wanted to tell a story about that with John. Mary has been born into a family of hunters she loves and adores and all that other stuff, but she’s been killing monsters since she was 4,” explained Thompson, who attended the University of Michigan and the University of Southern California.

“The Winchesters” was conceived by Ackles, his wife Danneel Ackles (Sister Jo on “Supernatural”), and Thompson, all of whom are executive producers. Thompson, Donnelly, Rodger, and the Ackleses recently promoted “The Winchesters” at the New York Comic Con on Oct. 9. In fact, this was Ackles’ first time at NYCC.

Ackles surprised the audience by announcing that Okemos High School alumnus Tom Welling, alias Clark Kent on “Smallville,” has been cast as Samuel Campbell (who was portrayed by Mitch Pileggi of “The X-Files” fame on “Supernatural”), Mary’s father and Sam and Dean’s grandfather.

Welling appeared briefly onstage to thunderous applause and cheers. He pointed to Ackles. “This is all Jensen’s fault. I lost a bet, which is why I’m here.”

“Don’t lose a bet to me. I’ll bring you up on stage and embarrass the (expletive) out of you,” said Ackles, who worked with Welling on “Smallville,” playing Clark’s football coach Jason Teague.

“You get to call me grandpa now, pal,” said Welling, eliciting laughter from the
cast and audience. No stranger to “Supernatural,” Thompson served as a writer and co-executive producer for five seasons. He also serves as the showrunner on “The Winchesters.”

“It’s been incredible,” said Thompson. “I had a really great run on ‘Supernatural’ … it was one of the best jobs I’ve ever had. (‘The Winchesters’) was the easiest ‘yes’ to say to a job opportunity I’ve ever had.”

Thompson immediately addressed retconning the “Supernatural” canon in “The Winchesters.”

“We won’t be retconning anything, I’m gonna get that right out of the way,” he said. “How we’re doing what we’re doing, we’ll be explaining over the course of the first 13 episodes. By the time we’re done, it’ll be revealed we’re not rewriting anything, we’re not retroactively changing anything. I can’t quite get into details because we want to tell the story in a certain way, but I can promise you… our intention is to not undo 15 years of ‘Supernatural.’ In fact, it’s like the expression, ‘Physicians do no harm.’ That’s what we wanted to do.”

He also addressed that people don’t need to be familiar with “Supernatural” to enjoy “The Winchesters.”

“We’re trying to design it so if you’ve never seen ‘Supernatural,’ you can watch it. But if you have seen it, there’s a richness there that you can really tap into both from a character dynamic and from an Easter egg standpoint,” said Thompson.

In “Supernatural,” John was portrayed primarily by Jeffrey Dean Morgan of “The Walking Dead” fame. Mary was portrayed by Amy Gumenick and later Samantha Smith. This gave Thompson a great template for a younger version of the couple, especially
since he always wanted to do more with Mary.

“I was always interested in that part of their backstory. What was like to be raised in that world? What was it like to have a knife put in your hand (at 4)? When we meet (Mary) in the pilot, she’s at a point where she’s really questioning if this is what she wants to do for the rest of her life. I just thought it was a fun dynamic to play with and then I thought: Who can we bring into that space? New characters with different
(perspectives), different senses of humor, different senses of trauma…”

Enter Carlos (Jojo Fleites), Mary’s hunting partner; Latika (Nida Khurshid), a pacifist who becomes a hunter-in-training; and Ada (Demetria McKinney), a mentor to the hunters. Thompson referred to them as the Scooby Gang. “I really was looking for different ways to build a team and have different team aspects,” he said. “It was a blast, diving into all of them.” Donnelly, who played Taylor on the sitcom “American Housewife,” admitted she was too scared to watch “Supernatural” when she was a kid. As an adult, even though some episodes still scare her, that hasn’t stopped her from watching it.

“Watching it for the first time, it was really incredible and the story they were telling was so compelling and so interesting, touching on such amazing topics and also having a fun monster-hunting element. I thought it would be fun. I’d never done something like this before,” she said. “I definitely watched a lot of the other Mary portrayals just because I wanted to make sure (I get it right). Like we always say: We’re
just giving context for ‘Supernatural.’ I also wanted to put my own take on it as well. She’s such a fun, badass character to play. Once we meet her, she’s even more closed off and badass because she’s 19.”

Unlike Donnelly, Rodger (“Murder RX”) watched “Supernatural” growing up and is a big fan. However, he had misgivings about doing a prequel.

“I read the pilot and was very impressed, then getting to talk to Robbie, Jensen, Danneel, and the whole creative team, there was this genuine sense of ‘We’re not doing this just to do it. There’s a story, there’s an angle we want to tell.’ As an artist, I think you feel (invigorated) by that. We’re here to create something; we’re not here to put out product,” he said.

As much as they love being part of the “Supernatural” mythos, that’s not to say they don’t feel any pressure playing younger versions of characters that already have been established.

“The fans of ‘Supernatural’ are so dedicated and so incredible, it was scary stepping into those shoes,” said Donnelly. “Also, I feel that pressure was also very exciting because… we’re constantly thinking about what the fans’ expectations are and we want to meet them. There’s definitely a pressure, but I think it’s a good pressure for the most part.”

Added Rodger: “The performances are so incredible between Jeffrey and Samantha… You can’t recreate what they did. It’s a fool’s errand to strive to hit that, so let’s give as much context as we can and also tell our own (story).” Jensen – who recently appeared on “The Boys” and is currently on “Big Sky” – thought he was done with Dean.

“You’re never gonna be done with him,” said Danneel.

The banter between this couple, who’s been married since 2010 and are parents to three children, was light-hearted and easy-going.
Jensen spoke about “Supernatural” lasting 15 seasons, something he’d never imagined.

Jensen also spoke about the genesis of “The Winchesters,” pointing out that other “Supernatural” spin-offs – most notably “Supernatural: Bloodlines” and “Wayward Sisters” – weren’t picked up for whatever reason. Towards the end of Season 15 when “Supernatural” went on COVID-19 hiatus, Jensen and Daneell talked about other spin- off possibilities once the series ended.

“We brought up how we could expand it, what that would look like. It just kept pointing back to there’s gotta be a Winchester in it – at least, that’s what we thought,” said Jensen. “We started talking about how Mom met Dad. We got waypoints that were laid out on the mothership. Let’s find a way to fill in those blanks in a way that is unsuspecting. Enter Robbie Thompson. That’s how it happened. We were excited by
the possibility of ‘Wait a second, could this work? Could this be the expansion we were looking for and hoping for?’ I hope it is.”

Danneell talked about setting it in the 1970s, a decade she loves.

“I also think a lot of things that are happening now are very similar, so I think it’s interesting to watch those parallels,” she said. “For me, I kept driving home the love story. That’s one thing I’ve heard over and over again: ‘Supernatural’ is not loved because it’s a show about monsters – it’s a show about brothers.”

“It’s the love story of two brothers, to be honest,” Jensen pointed out.

“This, to us, is we’re following another love story,” said Danneel.

“It’s a romance instead of a bromance,” added Jensen. “(They’re) not only fighting the good fight but also fighting for each other.”

Jensen explained that while everyone knows John and Mary’s love story and how it ended, there is a lot more to it.

“(We) know the romance worked. But it is the getting there that we really wanted to mess with. That’s where Robbie came in and said, ‘It should not necessarily be a forbidden love, but it should be a love that’s fought against…’ (Mary’s like), ‘I can’t bring you in, I can’t get too close to you.’ It’s that friction, that resistance, but still – ultimately – they can’t help but wanting to fight for each other, wanting to fight for one other, and wanting to fight for that love. I think that resistance and that struggle is really a great story, great character drive and motivation – not only individually but also as a unit.”

Added Danneel: “And the sacrifices people make for that kind of love. You do in all love, but the kind of sacrifices you will make for your children… it’s a different kind of love. Anybody that’s a parent knows that is so powerful, that unconditional love.”